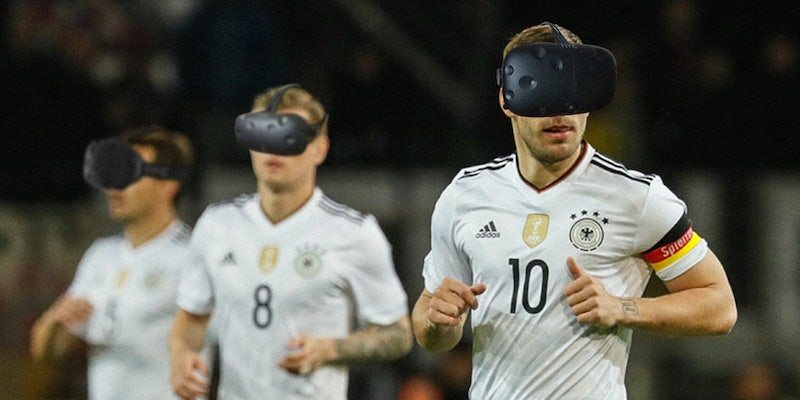 The German national team will use VR to train, and it could change soccer

The team is entering a brave new world.

The NFL has become a proponent of training in virtual reality—everybody from the Dallas Cowboys, who began using the technology in 2015, to Arizona Cardinals quarterback Carson Palmer has embraced the idea of practicing in this 3D space. So have the NBA’s Washington Wizards, the NHL’s Chicago Blackhawks, and, most recently, Walmart associates.

Now STRIVR—the self-proclaimed world leader in training athletes by using virtual reality—is expanding to European soccer, and the German Football Association (DFB) is the first to take a giant step into this brave new world.

Considering Germany is the defending World Cup champion, and has a reputation for forward thinking when it comes to using technology to better the national team, it seems like the perfect match.

“We’re new to virtual reality. It’s still a white space when it comes to soccer, but we want to be the first mover,” Nicolas Jungkind, the head of technology lab with DFB, told the Daily Dot. “On the academy side, our biggest focus for 2017 and going into 2018 is cognition. Virtual reality hits the sweet spot of what we’re trying to achieve.”

The DFB is beginning with a specific purpose. As Jungkind said, the DFB wants to start small and think big. He understands there will be plenty of trial and error, because when it comes to using VR technology, American football is vastly different than soccer.

That’s because each play on the football field starts from a stop. One team sets up on one side of the line of scrimmage. The opponent lines up on the other. Then, the ball is snapped, and the play begins. That kind of static starting and stopping makes it easier to train a quarterback on VR, because there’s a clear beginning and end point.

But soccer is continuously moving, making it a completely different experience and one that’s potentially harder to capture with VR.

“It’s very fluid,” said Derek Belch, the CEO and co-founder of STRIVR. “There’s a lot of space between people. There are a lot of challenges associated with that. …It’s about reaction time. It’s about cognition. Right now, they know there are eight different things a center midfielder can see over a year. How do we put that into VR? How do we make that second nature?”

For now, the DFB is using VR to think about how goalkeepers can improve their play, particularly when it comes to set pieces. Think of it this way: A goalie can use VR to analyze how an opponent will take a penalty kick. How many steps does the player take from his starting point to when he actually strikes the ball? How fluid is his approach? Does he start and stop, or does he make his attempt in one motion? Does he open his body before he makes contact? Does he show a tell before kicking the ball in one direction or the other?

It’s also about visualization and repetition. A player who’s taking a free kick can watch himself in VR shoot the ball around the defensive wall and under the crossbar for an amazing goal time after time. He can bend it like Beckham perfectly on every single attempt. To the German national team, there’s real value in that.

“What are those isolated decision-making moments?” Belch said. “It comes down to a fraction of a second. What are the things we can put into VR at various points to help a player make the best decision when it shows up in the game so that they just react and so that there’s no thinking involved?”

But not unlike some of the barriers STRIVR ran into when it was pitching NFL teams on why they should use VR, there is a bit of an old-school mentality that surrounds soccer that might sour on this kind of new technology.

“We have those old-school coaches in soccer, no question,” Jungkind said. “But now that we’re experiencing a lot of younger coaches making their way to the highest level, we’re already seeing a shift toward being open to technology and doing things differently. We want to be that first mover in these kinds of strategic areas. That is our ambition.”

Not just with the German national team that competes in international tournaments and will look to defend its World Cup title next year in Russia. The DFB also wants to continuously improve the club teams in the Bundesliga, the German pro league that’s one of the best circuits in the world.

“[The players] loved it; they absolutely did,” Jungkind said. “There are so many positive things. All they want to do is become better. If they realize we make an effort to make them better—that we’re thinking outside the box—they’ll appreciate that. Twenty years ago, you’d be sitting in a room for two hours and watching 2D film.”

Compare that passive experience to what Jungkind and Belch are striving for in soccer—a fully immersive, 360-degree VR experience that allows you to see an opponent’s tendencies from every angle possible while envisioning yourself succeeding at the highest level.