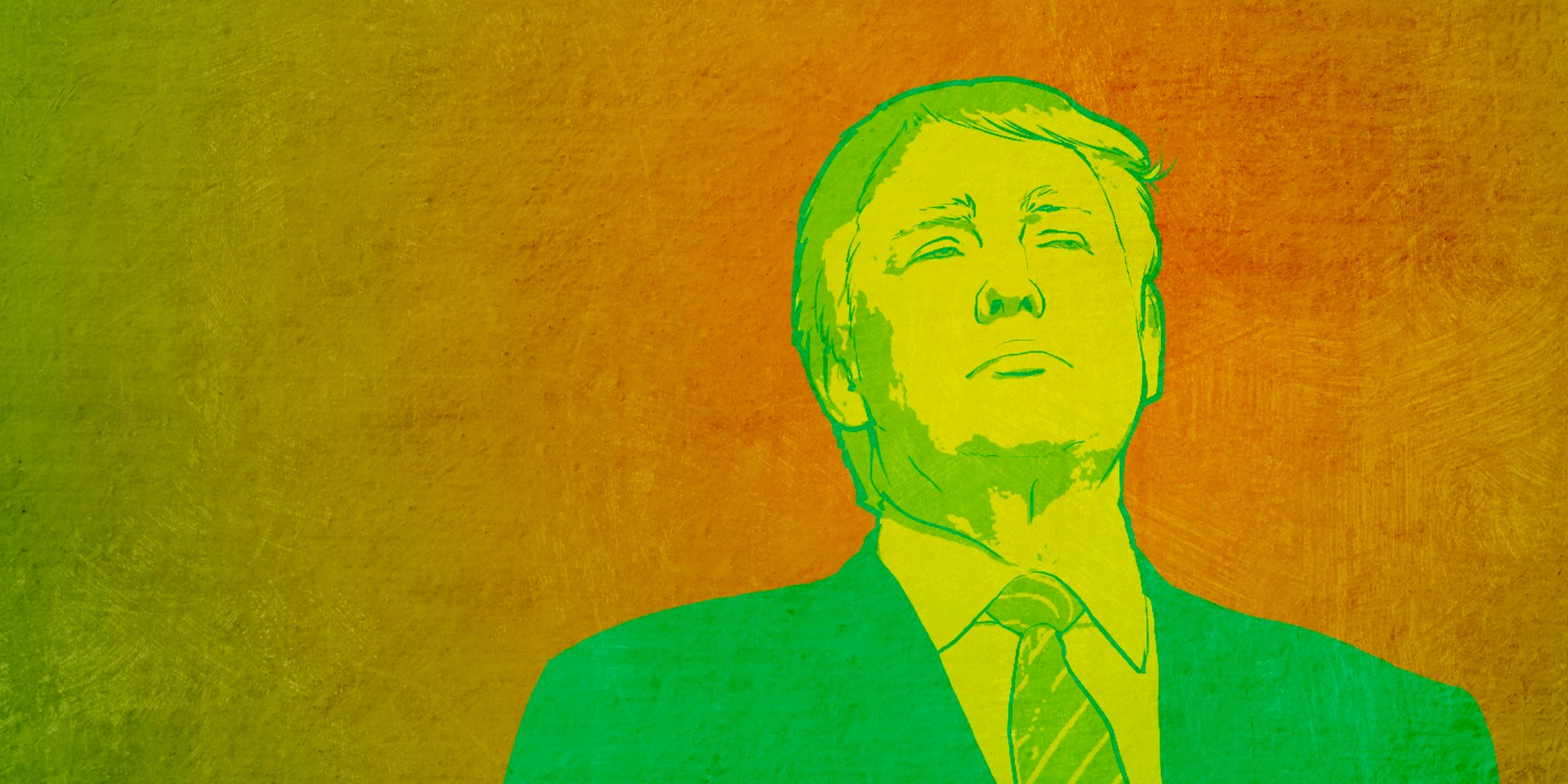 Making Twitter great again, one line of code at a time.

There is a small army of Twitter bots working to get Donald Trump elected president.

Earlier this month, Patrick Ruffini, the politically conservative co-founder of the social media analytics company Echelon Insights, sent out a tweetstorm about the bot network, after he discovered a collection of highly suspicious Twitter accounts tweeting pro-Trump messages. The accounts were also urging followers to file complaints with the FCC about robocalls generated by the campaign of Trump’s GOP primary rival, Texas Sen. Ted Cruz.

Ruffini noted that many of these accounts didn’t exclusively tweet about Trump. They also tweeted marketing spam.

But they're not just interested in Trump, but in a wide range of topics. pic.twitter.com/G0f04ibJVQ

According to Sam Woolley, a researcher at the University of Washington who studies the political use of social media bots, this type of behavior is relatively common.

“A lot of the time, the place where someone is buying bot followers, a marketing firm or … content-management firm, is working for a lot of different people,” Woolley said. “Bots are among one of many, many different tactics they use.”

By Ruffini’s tally, in the 30 days prior to April 7, the accounts had tweeted over 1.7 million times. About 411,000 of those tweets were about Trump. He also estimated that the group had collectively retweeted Dan Scavino, the Trump campaign’s social media manager, 13,000 times.

Shortly after Ruffini tweeted about the bot network, the original tweets about reporting Cruz’s robocalls to the FCC were deleted. However, the Daily Caller captured screengrabs of the tweets before they were taken down.

Ruffini did not respond to our requests for comment. However, a few days later, he sent a series of tweets digging into one Twitter account in particular—one that sparked a national outcry after Trump himself retweetwed a meme unflatteringly comparing pictures of Cruz’s wife Heidi to Trump’s wife Melania.

The @don_vito_08 Twitter account that Trump retweeted with the pic of Heidi Cruz is emblematic of how the Trump network seems to operate.

In his bio, @don_vito_08 lists himself as a "PhD, MBA, and neurosurgeon retired."

But it has not tweeted a thing until January 21, 2016. pic.twitter.com/jQC6ZBFbL3

This is a pattern that is repeated over and over again in the Trump Twitterverse. Aged accounts who started tweeting Trump all of a sudden.

We don't know yet if the campaign is paying for this or has a role, but the effort seems extremely regimented and professionalized.

A message to the account in question was not returned.

Ruffini posted a Google Docs spreadsheet listing nearly 500 Twitter accounts he believed to be part of the bot network. A quick check of 20 randomly selected accounts in the list found that 12 of them rated as having more than a 50 percent chance likelihood of being bots, according to the BotOrNot tool developed by Indiana University Bloomington’s Truthy project, which performs a series of tests to grade Twitter accounts based how bot-like their behavior is. A significant number of accounts on the list had been suspended by Twitter.

This instance is not the first time Twitter bots have been discovered to be boosting Trump. Immediately following the Nevada caucuses in February, a number of Twitter accounts appearing to belong to Latinos, based on their names and photos, all tweeted an identical message about Trump winning 40 percent of the Latino vote in the state, indicating the accounts were likely bots.

While every high-profile Twitter user has some bots among their followers, in his own poking around the Twitter following of the 2016 presidential candidates on both sides of the aisle, Woolley has noticed that Trump and Democratic frontrunner Hillary Clinton have unusually large numbers of bot followers.

“You can pay to have fake followers, but also a lot of time fake followers will just follow you,” Woolley said. “I’ve been manually doing some investigation on Trump and Clinton. … Both of them have a lot of bot-looking profiles that are just Twitter eggs with no followers, but they tweet all the time solely about … how great trump is or … about how great Clinton is. It seems pretty suspicions from my point of view.”

An analysis conducted by Followerwonk on behalf of FiveThirtyEight found that the two leading candidates, Trump and Clinton, have significantly larger shares of automated followers—8 percent and 7 percent, respectively—than do their primary rivals, who top out at about 4 percent (Vermont Sen. Bernie Sanders, a Democratic candidate) or below.

Ever since Twitter became widely recognized as a powerful tool for political organizing, political organizations have used bots to amplify their messages on the micro-blogging platform. In 2010, researchers discovered bots that were sending out messages promoting the website of then-House Minority Leader John Boehner. Two years prior, as discovered by a pair of researchers at Wellesley College, another network of Twitter bots, all created within minutes of each other, sent out a flurry of messages intended to influence the outcome of the special Senate election contest in Massachusetts between Democrat Martha Coakley and Republican Scott Brown to fill the seat left open by the death of Ted Kennedy.

Discovering the existence of these bot networks is often the easy part. It’s typically much more difficult to determine who is operating them and, even trickier still, to determine if a campaign is directly responsible. In the case of these Trump bots, it hasn’t been determined if they’re the work of the campaign (which did not respond to a request for comment), an outside group (like a super PAC), a “false flag” effort by one of Trump’s opponents designed to make the real estate heir and former reality-TV star look bad, or just an individual Trump supporter with too much free time on his or her hands.

Woolley, however, has a theory.

Panagiotis Metaxas, one of the researchers who discovered the bot network that played a role in the Massachusetts special election, told the Daily Dot in an email that there’s another possibility regarding the origin of the bot network.

“It is very likely that what Mr. Ruffini observed are actions of tweetbots. It is not clear that these bots are directed by Trump’s staff since they seem to tweet in sync on various unrelated topics,” Metaxas said. “More likely, these bots may be part of a marketing effort of a company to make them friends of other users in order to deliver advertisement. In order to get users’ attention, they need to tweet on issues that are provocative.

“They seem to be getting some attention, indeed.”