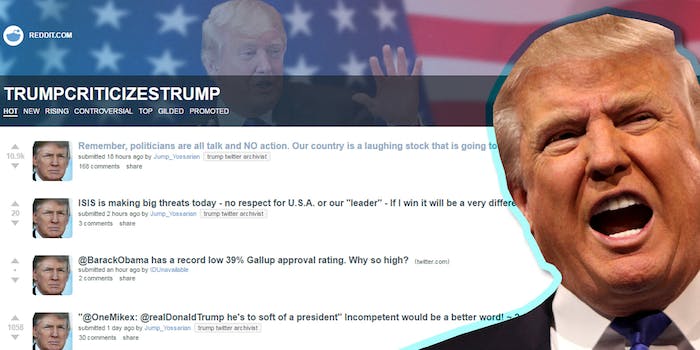 Meet the community tracking every time Trump contradicts himself on Twitter

Here are some of the best examples.

Do you ever get the feeling that President Donald Trump’s statements and actions tend to contradict things he’s tweeted in the past?

A Reddit community has gathered to create “Trump Criticizes Trump,” (/r/TrumpCriticizesTrump), an endless parade of past tweets the president has made throughout his long love affair with the social media platform that contradict things that have happened in his bumpy first few months in office.

While most Americans want Trump to stop tweeting, according to a recent poll, this subreddit thrives on Trump’s insatiable need to tweet on a daily basis.

The group, which has nearly 60,000 readers, claims that “for every Trump action, there is a Trump tweet criticizing that action,” and judging by some of their examples, they might just be right.

Trump Criticizes Trump has some ground rules, though: People are only allowed to post tweets, press releases, and other sources that document the “president’s hypocrisy.” The rules indicate that the subreddit is heavily moderated.

Some of the most popular submissions in the growing subreddit are the following:

Hillary Clinton doesn't have the strength or stamina to be president. Jeb Bush is a low energy individual, but Hillary is not much better!

The link immediately below the submitted tweet reports Trump dropping out of a planned speech  in Saudi Arabia due to “exhaustion.”

Obama thinks he can just laugh off the fact that he refuses to release his records to the American public. He can't.

This is clearly a jab at Trump’s insistence not to release his tax returns—something presidents have done while running for office since President Richard Nixon.

We need a President who isn't a laughing stock to the entire World. We need a truly great leader, a genius at strategy and winning. Respect!

The first post under this tweet is a quote from the Daily Beast where an official told them Trump was comparable to a “drunk tourist” during his foreign trip, and German Chancellor Angela Merkel saying the country could no longer rely on the United States after his much-criticized speech to NATO nations.

Remember, politicians are all talk and NO action. Our country is a laughing stock that is going to hell. The lobbyists & donors control all!

Trump promised to “drain the swamp” and decrease the influence of lobbyists in national politics. Many former lobbyists now work for his administration.

Of course, there are also classic Trump tweets that have cropped up since he was inaugurated and besieged by controversy. Like this one:

Are you allowed to impeach a president for gross incompetence?

The subreddit has multiple past Trump tweets submitted each day, with several of them starting substantial discussions among its community members.

Judging by the sheer amount of tweets that have been posted since the creation of /r/TrumpCriticizesTrump two months ago, there are likely to be more examples of Trump’s Twitter obsession coming back to haunt him as his term progresses.

Who knows, it might be today—as Trump is expected to live tweet the testimony of former FBI Director James Comey, who he abruptly fired last month amid the agency’s ongoing investigation into Russia and Trump’s associates.