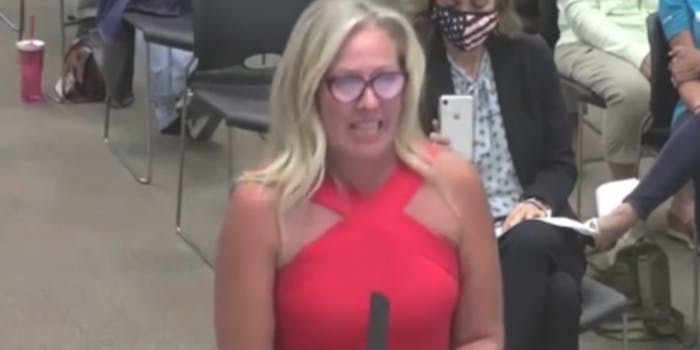 She was complaining about a library book that mentioned the act.

She starts her rant by reading a passage that contains descriptions of sexual activity from the book in question, Out of Darkness by Ashley Hope Pérez. She focuses on the use of the term “corn hole” in her rant:

Her microphone then cuts off and members of the board can be heard speaking in the background. She continues to speak anyway.

She then leaves the stand.

According to KXAN, the book has since been removed from the Hudson Bend Middle School and Bee Cave Middle School libraries. The contents of the book will be reviewed before it is decided to be removed permanently or put back on shelves.

The book chronicles a love affair between an African American boy and a Mexican American girl against the backdrop of a horrific 1937 explosion in East Texas, which killed nearly 300 schoolchildren and teachers, according to NBC News.

A school district spokesperson gave a statement to KXAN:

“A district possesses significant discretion to determine the content of its school libraries. A district must, however, exercise its discretion in a manner consistent with the First Amendment.

“A district shall not remove materials from a library for the purpose of denying students access to ideas with which the district disagrees. A district may remove materials, because they are pervasively vulgar or based solely upon the educational suitability of the books in question.”

Prior to this incident, Bell was detained by police in April after getting into an alleged altercation with a Nordstrom Rack employee and refusing to identify herself.

Bell was also suspected to be a part of QAnon, which she denied. According to previous reporting from the Daily Dot, Bell often interacted with now-banned Twitter accounts that were run by QAnoners and constantly spouted conspiracy theories.

Texas has gotten a lot of attention lately for its draconian legislations and is known for having a large influence on national education policies. Textbooks that are distributed across the country are often printed in line with what Texas’ Board of Education wants.

As a state known for leaning right on all social and hot-button issues, including race, abortion, LGBTQ rights, and climate change, these opinions and textbook structures deeply affect the way children are taught in the U.S.

“Texas is still mostly a conservative state and these people really think that teaching us sex Ed will make us more prone to dabble into it 🙄 Source: former public school student in Texas,” user nay77020 commented on the Reddit page which published the video clip.

The Daily Dot reached out to Bell for comment via email but has yet to hear back.