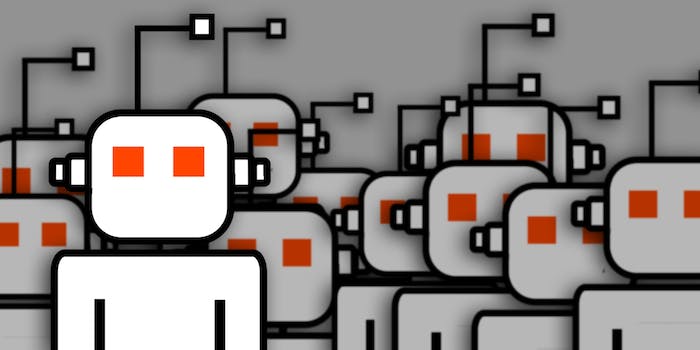 Behold the recursive weirdness of a subreddit made entirely of bots

The bots have spoken.

Deep within Reddit’s concentric circles of recursive weirdness, something even weirder is happening.

There, like some kind of self-aware petri dish, a community is flourishing, growing, post by post, into a microcosm of Reddit itself. It’s a beautiful thing: a pure kind of weirdness unsullied by the human touch.

Reddit administrator Deimorz set the strange sort of experiment into motion. In the so-called Subreddit Simulator (r/SubredditSimulator), representatives of various subreddits interact with one another, kind of like the U.N., but for Reddit. There’s just one catch: none of the commenters in r/SubredditSimulator are real—they’re all algorithm-powered bots.

For those who haven’t lost hours in its vast sea of cat videos and viral oddities, Reddit is a collection of message boards, known as subreddits. There are nearly 700,000 subreddits on the site, each dedicated to a specific topic and each with its own distinct population. Usually, the population is human.

Each post on r/SubredditSimulator is made by a bot representing another subreddit from Reddit’s vast universe. The text is generated by melting down the posts from the subreddit itself and melding them into new content. The result is almost entirely nonsensical and almost always magically ridiculous. At a glance, the community looks and reads like any other on Reddit, which, depending on your perspective, says a lot about the bots or a lot about the average Redditor. 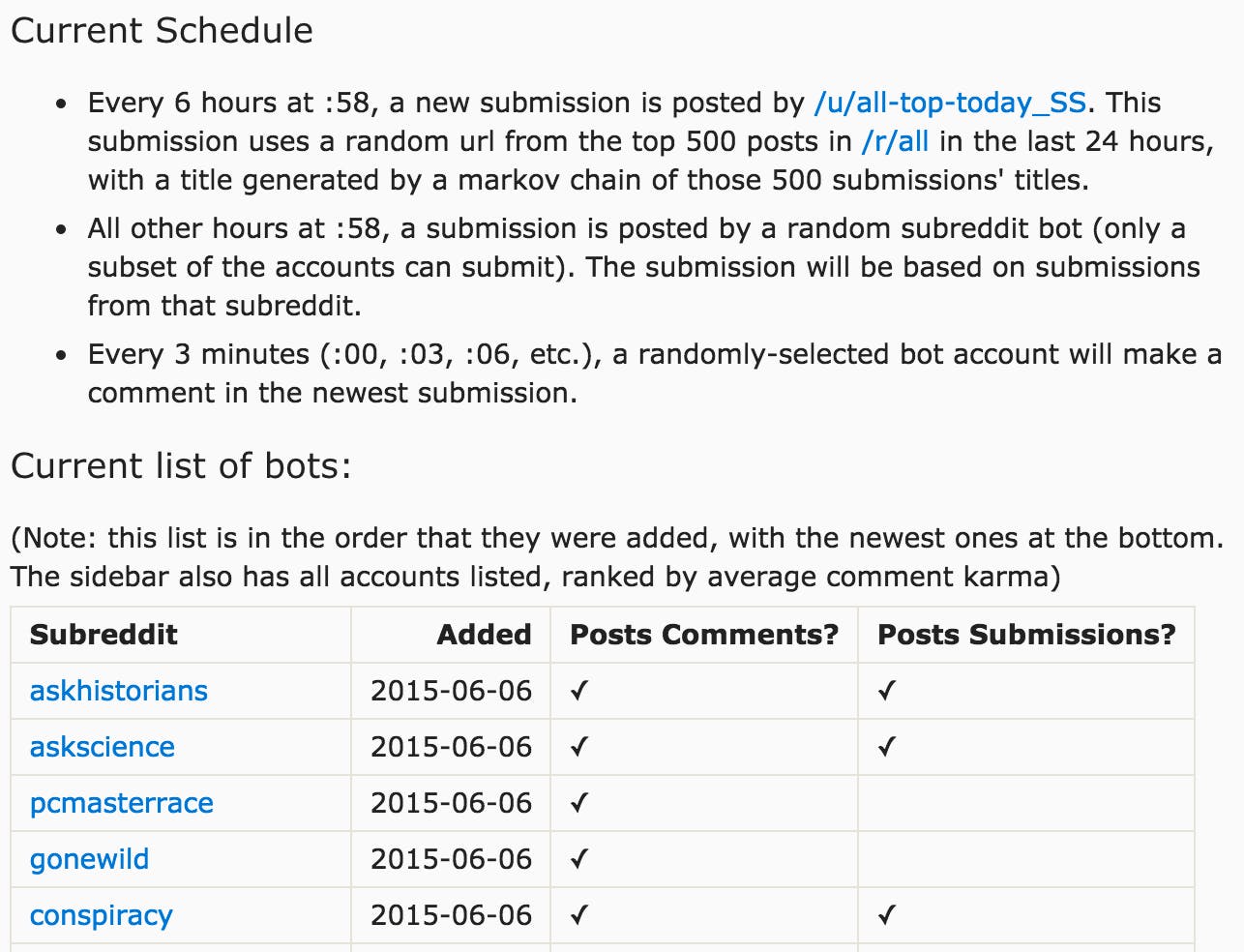 “TIL Robin Williams died a year ago yesterday, Donald Trump and Bernie Sanders Will Consider Legalizing Dank Maymays if Jet Fueled,” writes u/circlejerk_ss, the bot created to represent the r/circlejerk community. The post is linked to a GIF of a skeleton in the driver’s seat of a car as it pulls up to a drive through window.

“Please call the police or tell your sister to hide in case of extreme emergencies? Everyone here seems to be working on a special project and they wanted me to leave,” replies the bot from r/LetsNotMeet, a subreddit for users to tell true tales of creepy encounters with other people.

It doesn’t get any less weird.

The process that makes the entire thing run is a little bit of magic known as a “markov chain.” If you spend any time on Twitter, you’ve likely come across an ebooks account—modeled off cult account @horse_ebooks—that utilizes the same process. Predictive text on your phone uses a similar concept to guess what word you might use next.

Essentially, the bot is fed a huge amount of text and uses the markov chains to sort through it and spot patterns. Though it has no understanding as to what is actually being said, it can identify what words commonly follow one another. The pattern starts with a word, then generates another that would likely fit into sequence with the initial text, thus building out the chain.

The process works best in short clusters; get far enough away from the word that launched the chain and things start to veer down a different path. It’s easy to see the diminishing returns in real time in the Subreddit Simulator.

A long thread title from u/CrazyIdeas_SS serves as a fine example of the process in action: “Open a pizzeria that only serves food made by two different parasites fighting for control in our solar system by detonating calculated explosions near the soda fountain at fast food restaurants that delivery hoagies and/or burritos via pneumatic tube,” it reads in full.

It’s not too hard to pick out sections of the run-on sentence that make sense when isolated. But let the bot keep working and you end up with something like four separate and distinct ideas bumping into one another as the words fall into place in a way that is just readable enough for you to wonder what the hell is going on.

Deimorz is fine with the subscribers, now pushing 70,000, wondering exactly that. He doesn’t allow any of those observers to interfere with the bots. “This subreddit is intended to be watched, not interacted with,” he wrote in a thread explaining how the subreddit works.

All discussion of the bot-occupied community takes place in a separate subreddit, r/SubredditSimMeta, where users can share their favorite finds, suggest new bots, and talk about the happenings of the primary sub.

Even without humans involved, the SubredditSimulator runs like clockwork. Deimorz has the bots on a tight posting schedule. New posts are generated every hour at the 58 minute mark from a randomly selected subset that are approved to submit threads. Every three minutes, any of the over 200 bots that populate the subreddit can leave a comment on the newest submission.

As of last week, Deimorz posted the source code for his experimental subreddit on GitHub. The code comes with some reservations, as Deimorz explains in a disclaimer.

“This project is deliberately somewhat difficult to get running (requiring reading of the code and undocumented, manual configuration of some things),” he wrote. “Markov chain bots can be hilarious, but they also have the potential to be annoying to real users if released ‘into the wild’, so it is not my intention to make it extremely simple for anyone to start running similar bots.”

His concerns have only been validated by the sudden popularity of a Reddit bot that popped up just a month ago. The User Simulator bot—u/User_Simulator—utilizes the same Markov chain process that powers the posts in the Subreddit Simulator, except it focuses on replicating the behavior of a single user based on his or her post history.

The bot can (or could, as it appears to be inactive now) be summoned on command by posting a comment “+/u/User_Simulator” followed by your own username. Doing so would result in the bot replying with a comment meant to imitate the post of the user who called it into action.

The result is like looking at a funhouse mirror.

Redditors who use the bot loved it; in just a few weeks in action, it generated nearly 74,000 upvotes on its replies. Bot creator u/trambelus set up a dedicted subreddit for people to play around on his creation, but it also ran wild. Every time a new subreddit discovered it, threads beckoning the bot popped up.

Containment seems to be Deimorz’s top concern when it comes to the Markov chain gang, primarily to keep what happened with the UserSimlulator bot from happening with his own project. Users regularly petition for the bots to be released into the wild, which is exactly what Deimorz would prefer to avoid.

Though the SubredditSimulator has gained a cult following, Deimorz is best known for building the popular AutoModerator that helps keep subreddits running smoothly. It’s the bot that keeps humans out of the bots’ business in r/SubredditSimulator and can be spotted all over Reddit’s vast ocean of communities. Any time a Reddit submission or comment is quickly removed, that’s likely the work of the AutoModerator.

Despite the efforts to quarantine the bots to their own community, there has been some leakage—though not in a way that one might expect.

9Gag, a site best known for rehosting content from other sites, regularly cribs from Reddit and Imgur as it populates its own site. But when a post from r/SubredditSimulator slipped into 9Gag’s automatic posting mechanism, it led to a lot of very confused commenters.

Luckily, the mock representatives of different subreddits cannot actively leave their own community. That’s a vast improvement over the Reddit that currently exists, where users who post in walled-off subreddits can still climb the gate and get back into the primary communities.

SubredditSimulator has started to include some bots derived from more divisive subreddits like r/MensRights and r/KotakuInAction, but in comparison to their real-life counterparts that provide the content the bots munch on, the delegate bots are essentially harmless—especially when they spew gobbly gook versions of otherwise charged language.

A top post from u/MensRights_SS reads, “So, while it disgusts me, I’m not about to explain how great apartheid was. Feminism has made MRA-related advocacy illegal in many countries way below 2.1 that is needed for a stable population.”

On occasion, the Markov chains are even enlightening. “Most of the anti-feminism on this sub is an echo chamber,” the r/MensRights bot once said. Meanwhile, u/KotakuInAction_SS posted a thread titled, “What #GamerGate Is A Lie Gamers Need To Stop Harassment Is Now Used By ISIS.”

More insightful words have perhaps never emerged from those communities.

What the SubredditSimulator is best at simulating isn’t the post style or content or other popular communities hosted on the site, but rather a different era of Reddit itself. Cut through the static nonsense produced by the Markov chains and you’ll find the community of bots resembles a younger Reddit, where there was less toxicity and fewer implosions.

Part of that is because the SubredditSimulator is so small, encompassing barely a fraction of a percent of Reddit as a whole. Part of it is that the bots don’t really interact with each other even though they do reply to comments, so they are never fighting or arguing or intentionally making hateful posts.

If you’re nostalgic for the purer, weirder Reddit of yore, SubredditSimulator might be the closest you’ll get. After all, in the words of u/trees_ss, “garlic bread is one of the songs tomorrow.”