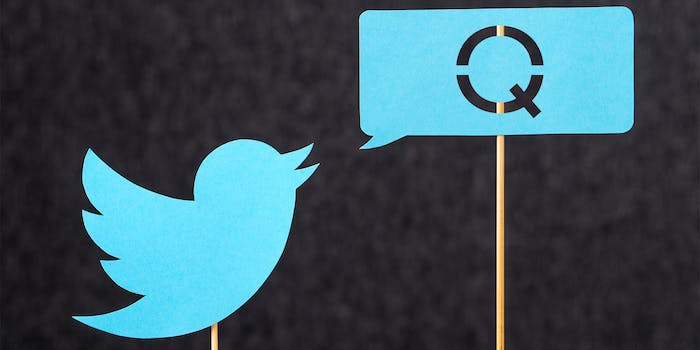 QAnon accounts banned by Twitter have already returned, with over 100,000 followers (updated)

The ban has proved ineffectual at best.

Update 5:36pm CT, Aug. 10: As of Aug. 10, Twitter has once again suspended the new accounts for Joe M, Inevitable ET, and Tommy G. But it appears at least one has already returned.

Inevitable ET appears to have repurposed an old account made in 2011, and is already piling up new followers.

Last week, Twitter announced that after over two years of almost unchecked growth by the QAnon conspiracy theory, it was taking steps to crack down on the activity of believers, including targeted harassment and sharing of links to QAnon websites.

The effectiveness of that measure, however, is questionable. Major promoters, supposedly banned, are still rampantly posting.

QAnon, which holds that a military intelligence team is using the message board 8kun to leak clues to their upcoming (and forever delayed) purge of deep state sex traffickers, has grown explosively on Twitter since late 2017.

Twitter has outsized importance in the Q movement, as popular QAnon promoters use it to decode Q’s posts, share videos and memes, alert Q acolytes to possible deep state “comms” hidden in tweets, and attempt to win over new converts.

From March to June 2020, there were over 12 million tweets that mentioned Q or one of its associated catchphrases, according to a new report from extremism research think tank the Institute for Strategic Dialogue.

Many of these tweets are also part of direct harassment swarms carried out against high-profile users who have fallen afoul of the Q movement, including Chrissy Teigen, Lady Gaga, Patton Oswalt, and Tom Hanks. And since the onset of the coronavirus pandemic, Twitter has seen a massive spike in QAnon disinformation and harassment, driven by the unchecked spread of coronavirus conspiracy theory videos like “Plandemic.” And just weeks earlier, Twitter was part of an explosive, QAnon-driven conspiracy theory that furniture giant Wayfair was using its website to sell missing children to traffickers.

So the site taking steps to curb the conspiracy theory’s reach was greeted as positive news by journalists and Twitter users alike, even if Q fans rolled it into their conspiracy theory that the site was hopelessly under the sway of deep state-linked celebrities.

A week later, Twitter has indeed taken some of these steps. Some high-profile Q accounts have been banned, and it’s no longer possible to send direct messages with links to Q sites.

Overall, mentions of QAnon and its related hashtags are down across the board.

But a large-scale crackdown of QAnon believers and total suppression of the conspiracy theory either hasn’t happened yet, or never was going to. Twitter never said it would entirely deplatform Q, the way Reddit did in 2018 when it banned dozens of Q subreddits. It would merely reduce the ability of users to find material related to the conspiracy and to limit its public reach.

More than that, almost all of the major banned accounts have already come back to the site with a new or alternate account and picked up right where they left off.

Within a few days of the news breaking, Twitter suspended several high-profile QAnon-promoting accounts. The first to go was “Inevitable ET,” an influential user with over a quarter of a million followers that had been banned well over a dozen times, only to create a new account each time.

A few days later, Twitter banned QAnon promoter and podcaster Tommy “Tommy G.” Gelati, after he had unleashed a swarm of harassment on Daily Beast writer Will Sommer, who had written a story about Gelati’s previous conviction for bank robbery. Then on Monday, Twitter once again suspended QAnon promoter and conspiracy theorist Joe M, who had rebuilt his following under the name @SheepKnowMore after previously being banned in April as @StormIsUponUs.

These three QAnon promoters, with well over half-a-million followers total, were notorious for spreading conspiracy theories, harassment, and disinformation, as well as for creating new accounts to get around bans. They are just the sort of accounts tailormade for Twitter to ban as part of a sweeping crackdown on a violent conspiracy theory that’s gotten out of control and made the site less safe for regular users.

But as of July 30, all three were already back on Twitter under newly created or reactivated alternate accounts: Joe M as @ToddBurgun, Tommy Gelati as @ReturnOfTheGedi and Inevitable ET as @mrbotus_520.

None of the three made any real effort to hide who they were, dropping easily deciphered clues into tweets on their new accounts or on Parler, where Q promoters tend to go to complain about their Twitter bans. They let Q fans know what new account to check out and instantly picked up tens of thousands of followers.

Together, they have racked up over 100,000 followers already, swiftly encroaching on their pre-ban reach.

Beyond allowing banned accounts to sneak back on, many other high-profile QAnon promoters are still active and prolifically spreading conspiracy theories. QAnon-driven disinformation is still going viral, including a recent video of a group of pro-hydroxychloroquine doctors that got millions of views in hours, thanks in part to being shared by Q promoters.

And Q believers are using alternate hashtags to get the word out, including #CueAnon and #17Anon, while regular favorites like #WWG1WGA are still easily searchable.

Twitter is by far the most important digital battlefield in the war that Q followers see themselves fighting against the deep state. Q believers won’t give up on Twitter and migrate to a “free speech” site like Parler for this simple reason: Twitter is too popular with “normie” and “awake” users alike to walk away from.

So unless Twitter implements a real ban, QAnon is here to stay.