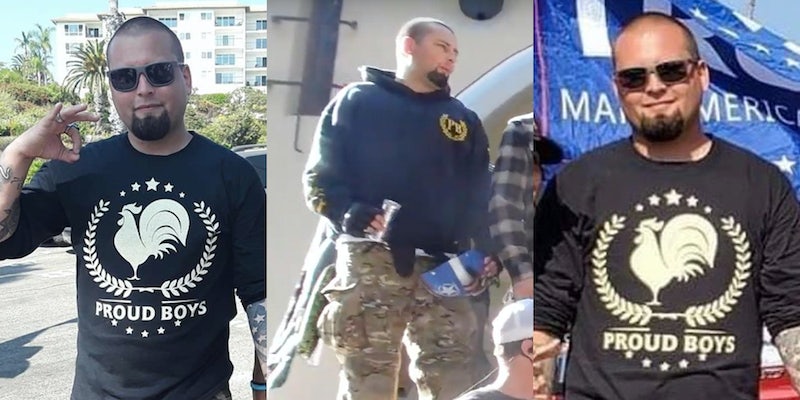 Proud Boys across the U.S. renounce membership as arrests, repercussions from Jan. 6 ratchet up

Are the Proud Boys no longer proud?

Adam Keifer, a regular at right-wing rallies and counter-protests, is a trucker who resides in California. At the events, he can be seen in videos instigating fistfights, menacing locals, and harassing members of the media.  He has traveled to both Portland, Oregon and Washington, D.C. to participate in Proud Boy rallies and is regularly dressed in their garb.

Yet, when pressed on his affiliations, he’s now taking to denying he’s a member.

On Sept. 3, Keifer filed a petition for a restraining order against Chad Loder, a popular antifascist researcher on Twitter. Loder tweeted out on Sept. 2, 2021 to his 100,000 followers the city Keifer resides in, in a post documenting his alleged relationship with the Proud Boys and his presence at the Capitol riot on Jan. 6, 2021.

Kiefer has not been named in any public law enforcement documents relating to the riot. However, many Proud Boys have been arrested for their actions at the Capitol.

Anti-fascists often identify and expose right-wing activists online to increase the social costs of being hateful or abusive to marginalized groups. Loder has specifically focused on that since the Unite the Right rally in 2017. They told the Daily Dot, “Online radicalization leads to real-world violence. The hope is that, by exposing the people who commit violence, their ability to operate freely and anonymously is constrained.”

The video used by Loder to place Keifer at the Capitol that day shows Keifer wearing a black sweatshirt. Keifer had already been photographed wearing the same sweatshirt at rallies for former President Donald Trump across Southern California.

It’s a look that aligned with the Proud Boys’ intentions that day. The group intentionally decided not to wear their normal black and yellow to D.C. According to a post made on Parler by their chairman at that time, Enrique Tario, this was intentional. “We will not be wearing our traditional Black and Yellow. We might dress in all black for the occasion. We will be incognito and we will spread across downtown DC in smaller teams.”

Kiefer has been photographed, however, on multiple other occasions wearing both the Proud Boys logo, a yellow laurel wreath, and their colors of black and yellow.

And it’s hard to deny he’s a member. Videos of Kiefer, obtained by the Daily Dot, show Kiefer taking the Proud Boys oath. Kiefer did not respond to multiple requests for comment from the Daily Dot.

But in the transcript of the Jan. 4 court case between Loder and Kiefer, Kiefer waffled to Loder’s attorney John Hamaski on what his exact relationship with the Proud Boys is. During cross-examination, the court was presented with an exhibit of photos showing Keifer wearing black and yellow Proud Boys attire on multiple occasions.

One such occasion was a Proud Boys march through Washington, D.C. on December 11, 2020.

Q (Hamaski): Okay. Was there a particular reason that you were wearing yellow and black clothing on that day?

A: Can I answer with a narrative?

A: Okay … I’m not — you’re trying to incriminate me to something … to get me to say something that’s totally irrelevant and not even a crime.

Q: Mr. Kiefer, maybe I should just back up and ask a simple question. Are you a member of the Proud Boys?

Yet, a few minutes later Kiefer used the word “we” when asked another question by Hamaski in regards to the Proud Boys.

Q: The individual holding up a symbol with his thumb and forefinger joined, do you recognize that symbol?

Q: What is that symbol?

Q: That’s interesting — I said, when you were answering that question about the Proud Boys, you said “We.”

Keifer’s waffling on the stand about his allegiance, however, isn’t an isolated incident. In the year after the Jan. 6 Capitol riot, numerous Proud Boys have cast off their associations in the group. The Proud Boys, it would appear, are no longer proud.

“Kiefer’s decision to get on the stand and claim that he wasn’t a member of the Proud Boys, even in spite of ample evidence, signals a clear shift in the organization’s culture after Jan. 6,” Hamaski told Daily Dot, “Which makes sense, considering all of the investigations, arrests, and convictions after January 6. Why would you implicate yourself as a member of the domestic extremist organization?”

The Proud Boys, like many clubs and fraternities, have initiation rituals and requirements for membership. According to their website, to become a first-degree member one must publicly declare their affiliation to the Proud Boys. Founder Gavin McInnes believed a fundamental tenet of that is unapologetically upholding “western chauvinism.” As such, the phrase “I am a western chauvinist, and I refuse to apologize for creating the modern world” has become the public declaration cited when people join.

Back in 2018, social media was littered with videos of Proud Boys declaring their love for western chauvinism; some of these videos featured McInnes. But now many of those videos have either been made private or scrubbed from the internet.

And the case of Keifer may explain why

At some point in time, Keifer was in a video obtained by the Daily Dot of him declaring his first-degree membership in the Proud Boys.

In a second video involving another ritual that signifies a second-degree membership, Keifer gets punched by fellow members of the Proud Boys while naming five different breakfast cereals.

According to McInnes, “The rationale [behind the breakfast cereals] is we all need better ‘adrenaline control.’ Both physical fighting and arguing require you to maintain your composure …  Defending the West against the people who want to shut it down is like remembering cereals as you’re being bombarded with ten fists.”

Both of these videos have been scrubbed from the public internet, and Keifer’s Instagram is now private.

The videos appear to have been filmed in Bakersfield, California on Oct. 17, 2020. On that day, there was a Trump rally held in Emerald Cove Park in which a fight broke out and a man was arrested for firing a paintball gun. Kiefer can be seen taking photos with other Proud Boys in their booth during a local news report.

Although Keifer was present at the Capital on Jan. 6, he has not been detained or arrested. Indeed, Hamaski made the point during questioning, saying that a possible motivation for Keifer’s filing of a temporary restraining order was fear that he could be. Loder’s Twitter posts have been used by the FBI to identify several other insurrectionists and his posts also directly appear in the Department of Justice’s Statement of Facts for David Dempsey, a Proud Boy Keifer’s been filmed with.

Hamasaki: I think, what is hard to escape the relevance or the conclusion is that his friend was arrested after Chad Loder identified him as being a Capitol rioter. Sept. 2nd comes. He’s identified as a Capitol rioter. He’s in fear of getting arrested and prosecuted for his actions that day. So he runs down to the courthouse and gets a restraining order against Mr. Loder to try to stop him from publishing information about him.

Although there is no proof Keifer was more deeply involved with the Jan. 6 insurrection, his ties to the Proud Boys and several Capitol insurrectionists are fairly clear. Dempsey isnt the only one. As of today, over 50 Proud Boys have been charged for their actions at the Capitol on Jan. 6.

But now they appear to be, at least in public, departing the organization. Especially when faced with consequences for previous Proud behavior.

In November 2018, McInnes announced that he was parting ways with the organization he founded.

This announcement came a day after the FBI placed the Proud Boys on an extremist list for their ties to white nationalism. At that time, a group of New York Proud Boys was facing criminal charges for assaulting counter-protesters outside the Metropolitan Republican Club. McInnes stated in a YouTube post, “As of today, November 21st, 2018, I am officially disassociating myself from the Proud Boys, in all capacities, forever … I quit … I do this reluctantly because I see it as the greatest fraternal organization in the world but rumors and lies and bad journalism has made it’s way to the court system, and the NYC9, the Proud Boys arrested after I did a talk here in New York, are facing serious charges.”

Many others, in the wake of a similar spate of charges after the Capitol riot, appear to be following his lead. Keifer is just a small part of a bigger pattern seen playing out across the country.

Several Proud Boys have also lost employment and personal relationships due to their affiliation with the group. Former Proud Boy Joshua Pruitt, who is facing federal charges, recently told CNN that he no longer associates with the right-wing extremist group. Although he doesn’t feel he did anything wrong, knowing the consequences of his actions now he said would have been a deterrent for his actions then.

A northern California Proud Boy, Jeffrey Perrine, was booted from his leadership role in the Sacramento County Republican Party for his ties to the organization. According to the party, he initially denied that he was a member. Rick Fitzgerald, a former Fresno police officer, was put on administrative leave when photos and videos of him dressed in Proud Boys gear surfaced on social media.

He immediately claimed that he was no longer a member.

“I have video from Jan. 6, 2021 in Los Angeles in which the Proud Boys discuss their decision to not wear Proud Boys colors that day,” Loder told Daily Dot, “Many hide their affiliation so that they can appear to be regular concerned citizens who are engaged in a spirited demonstration of sincerely held political beliefs, rather than armed thugs working security for right-wing rallies.”

Although the Proud Boys continue to hold and attend rallies, they are mainly doing so locally. While at these rallies, many of them wear masks or cover their faces with gaiters.

Even so, there are still some Proud Boys who are loud and proud. Take, for example, Tusitala “Tiny” Toese, who is currently facing a litany of charges for allegedly trespassing on the grounds of the Governor’s mansion in Olympia, Washington on Jan. 6, 2021. He is also facing charges for his actions at a rally in Portland, Oregon on Aug. 22, 2021 that became violent.

Keifer was reportedly present at this rally.

Keifer’s case against Loder was ultimately dismissed and a permanent restraining order was not granted. But Loder’s evidence that he was a Proud Boy, despite his protestations on the witness stand, shows the struggles within the organization.

Tina-Desiree Berg is a Los Angeles-based journalist and host of the District 34 Podcast. She is the author of Unraveling Race: A History of Scientific Racism, and a freelancer for Status Coup News.