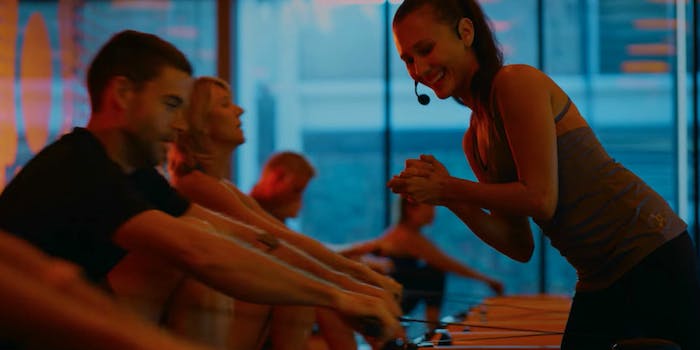 My Orangetheory workouts are fueled by rage for its busted tech.

Orangetheory Fitness is the hottest workout fad in the country right now. Chances are a studio has already cropped up in your city—if not several of them. Each one typically offers the same daily one-hour workout: a high-intensity circuit of treadmills, rowing, and floor exercises. These are all designed to elevate your heart rate.

I’ve been going to Orangetheory Fitness (OTF) for the last six months, and I’ve mostly enjoyed the experience. It’s never the same workout twice, and the abundance of studios nationwide makes exercise during travel easy. My stamina is up considerably. For a few fleeting moments before the holidays, I was even back down to my college weight.

What’s the problem with Orangetheory?

There’s one problem with Orangetheory Fitness that no one seems to be talking about. I’m reminded of it every single time I get ready for another workout.

The proprietary tech at the center of Orangetheory Fitness’ entire pitch is deeply flawed. The OTbeat Core is the single dumbest piece of smart technology I’ve ever encountered. It’s a wearable that’s uncomfortable to actually wear—and worse, it’s inaccurate.

How does Orangetheory’s system work?

The OTbeat Core is the chest-strap heart monitor that tracks when you reach the coveted “orange zone.” Reaching this zone earns you “splat” points. That probably sounds like gibberish. Allow me to explain.

The “theory” in Orangetheory Fitness is excess post-exercise oxygen consumption, or EPOC. That’s a complicated way of describing your body’s natural afterburn following strenuous activity. OTF argues that you continue to burn calories post-workout. Every minute your body spends at 84 percent or greater of your maximum heart rate contributes to this. Of course, your age, weight, and gender play a role in it too.

The maximum heart rate percentages fall into five different levels with the orange range starting at that 84-percent mark. For every minute you spend in that orange zone (or higher, in the red), you earn one splat point. The goal is to earn 12 splat points per class. OTF says leads to an “increased metabolic rate for up to 36 hours after the workout.”

In short, the OTbeat has one job—to monitor your heart rate—but it does it poorly. It often lags and fails to accurately read my heart rate. I’ll be sprinting on a treadmill and will actually see my heart rate going down on the monitors. Lately it’s providing fewer and fewer real-time updates during my sessions. Sometimes it even loses its charge in the middle of a workout.

People accept the discomfort that comes with chest-band heart-rate monitors because they’re supposed to be more accurate. As Ars Technica explains:

When doctors and nurses use ECG [electrocardiogram] machines to assess patients, they place up to 12 leads on various parts of the patient’s body, most of them going on the chest around the heart. This lets medical professionals more comprehensively assess the electrical activity of the heart. Chest straps simplify this method. No one wants to attach multiple sensors to their body when they go for a run.

Unfortunately, the OTbeat fails to effectively monitor electrical activity. The studio I attend hides a tube of Spectra 360 electrode gel behind the front desk to improve readings. I don’t notice much of a difference. If you’re having to add gel to your wearable, there’s probably a larger issue.

Even worse, the OTbeat is pretty much worthless when you’re not at Orangetheory Fitness. OTF has an app that allows you to track your heart rate percentage outside of class and earn splat points. The problem is that not every studio participates. I tried to download the app recently and couldn’t even get past the welcome screen. The OTbeat Core operates via Bluetooth, and some users on Reddit have connected theirs to apps like iCardio. But there are far more better ways of tracking that info.

It would be one thing if the OTbeat Core—or its slightly more aesthetically pleasing but no less problematic armband counterpart, OTbeat Flex—were free. Then it would just be bad swag. But it costs $60 (or $80 for the OTbeat Flex). While that’s comparable to the Polar H10 Heart Rate Monitor on Amazon, at least it’s highly rated. It also doesn’t require any additional membership fees to function. (Eight sessions at a “premium” studio in Washington, D.C., cost $157.57 per month.)

For the amount of money you’re adding on for the OTbeat, you should expect accurate results and some greater comfort. Fitness trackers have come a long way in recent years. The added benefits of the most popular and accessible wearables far outweigh whatever negligible differences there might be in heart-rate monitoring.

Here’s a brief list of things OTbeat Core can’t do:

For $60, you could get two Moov Now fitness bands, which don’t offer heart rate tracking but can count steps and boast a swimming mode and sleep-monitoring features. Or you could get a Huawei Band 2 Pro, which does what little the OTbeat offers and adds precision, GPS, and sleep- and step-tracking. You can also better use your money towards a Fitbit, Apple Watch, Samsung Gear Fit 2 Pro or basically any other fitness-tracking wearable.

The most frustrating thing about the OTbeat is that it’s actually integral to Orangetheory Fitness. The company brilliantly gamifies its workout experience—and does so in a very public way. The studio displays show your heart rate percentage right next to everyone else’s. It helps create accountability and tugs at your competitive side.

I used to push myself to get into that orange zone—and to stay there for as long as I could. I would linger on the treadmill for an extra few seconds to try to sneak in one extra splat point. All that to make sure I got to 12 and unlocked that sweet afterburn.

Now I find myself fueled mostly by my frustration at the OTbeat. I stare at the screen and wonder why the numbers are staying flat or moving in the wrong direction. I’m not the only one either.

One of my co-workers doesn’t even wear her heart-rate monitor to class anymore. And she’s the biggest OTF evangelist I know. “I got so frustrated with [the heart rate monitor],” she told me. “I’d be sprinting and in the grey [zone] … could hardly get splat points to save my life. Drove me nuts and took away from my workout.”

She’s using an Apple Watch now. It’s probably time I do the same.