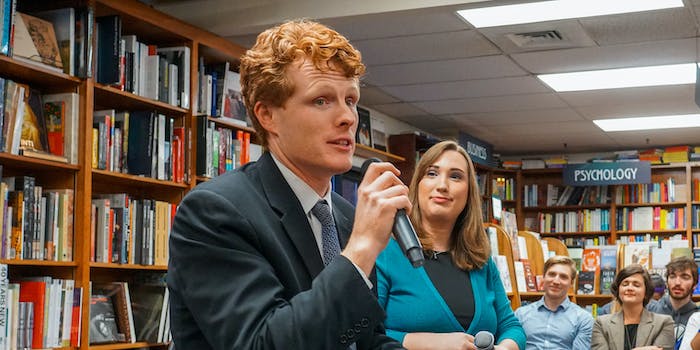 Both sides of Congress have taken shots at big tech over the past year, but Rep. Joe Kennedy III (D-Mass.), who is running a fraught challenge against Sen. Ed Markey (D-Mass.) for his Senate seat—has a stock portfolio that includes shares in a number of the companies that have taken heat from lawmakers.

And with big tech a pressing issue that will crop up again and again over the next few years, will millions in tech money shape just how tough Kennedy could be on Silicon Valley?

Overall, the race has become one of the most closely watched Democratic primaries with party leaders like House Speaker Nancy Pelosi and progressive stalwarts like Rep. Alexandria Ocasio-Cortez (D-N.Y.) weighing in.

But the result of today’s primary could shift various aspects of tech policy in Congress.

Markey has led the charge for a number of tech-related issues like net neutrality and rules surrounding the collection of children’s data. He also has focused heavily on broadband while in office, writing the National Broadband Plan in 2008 and pushing for an update to the National Broadband for the Future Act this year.

The Massachusetts senator is widely known as a champion of net neutrality, with the Electronic Frontier Foundation’s Senior Legislative Counsel telling WBUR last year there is “probably no one who knows the telecom market, with the same detail of the history of competition, more than Ed Markey at this point.”

Then there’s Kennedy. While his stance on net neutrality is not different than Markey’s—the representative has been outspoken against the Federal Communications Commission’s (FCC) repeal and voted for a maneuver that would restore it—records show that Kennedy holds a wide array of tech stocks, including one internet service provider who has worked against the regulations net neutrality rules put in place.

Over the past few years, Kennedy has listed stocks for several tech companies and telecommunications companies on his annual financial disclosures.

The companies include: Amazon, Alphabet, Microsoft, Facebook, and Verizon.

The financial disclosure forms require lawmakers to list the value of the asset, what type of income, and the amount of income earned in various tiers.

As the Center for Responsive Politics points out, in 2018, Kennedy disclosed that he held Microsoft assets that could be valued between $380,000 and $800,000. Some of the Microsoft stock was part of trusts. Kennedy has said he has no input on his family’s trust.

Verizon was behind a lawsuit that challenged the FCC’s first attempt to regulate internet service providers under Title I of the Communications Act. Because of that suit, the FCC eventually decided to regulate ISPs under Title II, a more restrictive regulatory category.

The assets held by Kennedy raise some questions, according to outside groups.

Cohn added that it appears that Kennedy has gotten better on data privacy and surveillance issues over his career in Congress.

“In terms of tech stuff, it’s something that Markey has been far more outspoken on,” Cohn said. “I just don’t see Kennedy as somebody who is particularly outspoken in this space.”

However, it’s unclear that owning assets for these companies has affected Kennedy’s stance on issues surrounding them.

Markey has been especially critical of Facebook in regards to data privacy. In 2019, when Facebook said it planned to integrate Instagram, WhatsApp, and Messenger, Markey said the social media giant needeed to offer “more than mere assurances” that the move would “not come at the expense of users’ data privacy and security.”

Neither of the two lawmakers have said much about breaking up big tech, which was a campaign issue for their fellow Massachusetts lawmaker Sen. Elizabeth Warren (D-Mass.) during her presidential campaign.

With net neutrality, Kennedy has spoken out against the FCC’s repeal and signed onto a Congressional Review Act (CRA) effort in 2018 to overturn the appeal. While the CRA passed in the Senate, it did not get enough signatures to force a vote in the House. Kennedy was one of the lawmakers who signed on.

However, Cohn stressed that Markey’s absence from the ongoing net neutrality battle could set back efforts to restore the rules.

“If you’re losing somebody who is actively doing work on something and is a source of knowledge and uses that knowledge proactively, that’s a real loss,” Cohn said. “In a way, I just don’t see Kennedy having the same range and not the same issue space where [Markey] has led at all.”