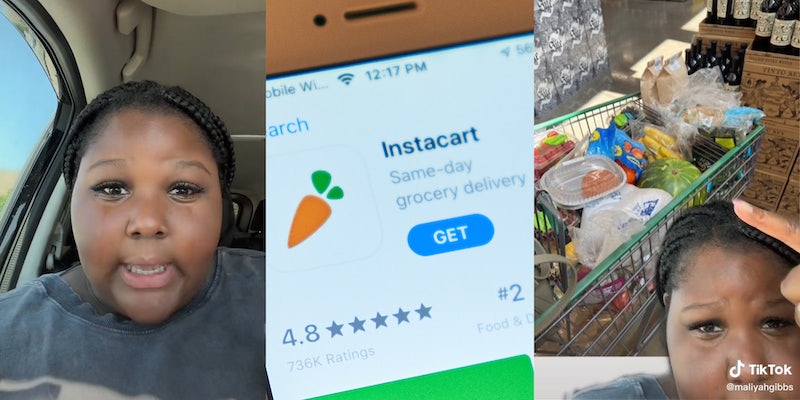 ‘I’m so mad that I’m literally shaking’: Instacart shopper says she was paid $7 after customer canceled in the middle of 125-item Central Market order

'Kinda wack that they allow customers to cancel after the order has already been accepted.'

An Instacart shopper says she was retaliated against for seeking better compensation after a large order she was in the middle of fulfilling was canceled.

TikToker @maliyahgibbs says she was shopping a $191 order placed through the grocery delivery service and that it was canceled by the customer after she completed half of it.

“I’m so mad that I’m literally shaking, do you see my hand? I’ve been crying because sometimes I do Instacart on the side to make money when I’m bored and when I have time. This morning I turn it on at 8am, and I get a notification from Instacart, like there is a new batch. [I] go to the app to accept it. It’s a batch from Central Market, and it’s like 125 items, which is a lot of freaking items, and then on top of that, the tip was really good. The whole order in itself was $191. Of course, I took it.”

“I had spent an hour-and-a-half already shopping and getting everything to the customer’s standards,” she says in a follow-up video. “I was even messaging them throughout the whole thing, making sure that I’m getting the exact items they want. If something is out of stock, I’m asking them, ‘Is it OK if I replace it with this?’ They’re responding. So they know I’m on the order.”

When she reached out to Instacart for assistance with the order, she says she was told that the total compensation she would receive for the order was $7, less than she was previously paid to return an order after a customer was not available to receive it. She says when she pressed for additional pay on the order, she says the Instacart representative assisting her told her that she would have a marker placed on her account as a shopper, placing it under review and potentially preventing her from shopping for the app in the future.

Commenters suggested Instacart should pick up the tab for groceries already shopped, or prevent customers from canceling orders that are already in progress.

“Kinda wack that they allow customers to cancel after the order has already been accepted,” one commenter wrote.

“Instacart should be legally liable to purchase those groceries,” another commenter wrote. “Such a waste of store resources.”

“This is NOT acceptable,” a commenter wrote. “Customers shouldn’t b allowed to cancel an order once someone is working on it.”

The Daily Dot reached out to @maliyahgibbs and Instacart via email regarding the situation.