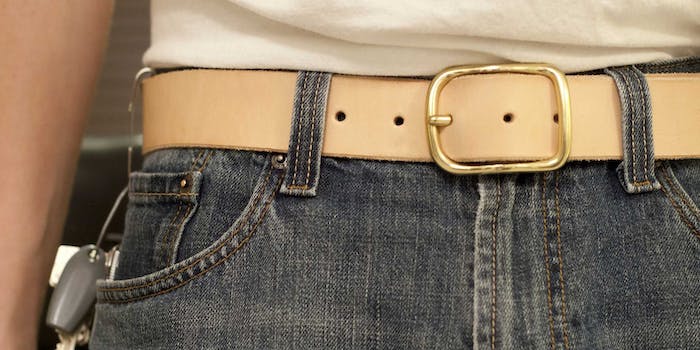 Rich, creepy fashionistas may be wearing the skin of the deceased.

Books bound in human skin are a staple of horror movies, and there are even a few kicking around in real life. One tends to assume that the practice has pretty much died out, presumably because it is (or should be) illegal. But according to Human Leather Exclusive Products… not so much.

This website claims to sell products made from real human “leather,” and that it’s all perfectly legal. We’ll leave that one for the lawyers to decide, but probably the only way to prove their authenticity would be to buy one of their products and have it tested. And since a wallet is selling for $14,000, that’s not really an option.

So, who’s buying this stuff, and how does this website source the “leather?”

In answer to the first question, HumanLeather.co.uk says it caters to “a small but discerning clientele,” which makes sense because there can’t be a huge market for $14,000 human skin wallets. It’s basically the middle of a Venn Diagram between “extremely rich” and “extremely creepy”. According to the site’s FAQs, their clients are “amongst those lucky few who have everything they could possibly desire. Our supply is restricted and we prefer to keep it that way as we are the only firm in the world that crafts these special products.”

As for the source, the site claims that their “donors” bequeath their skin before death and that their next of kin are handsomely rewarded, although only “the highest quality human skin” is accepted. So you can pre-emptively sell your skin, only to have it rejected because you didn’t moisturize enough when you were still alive.

It’s a deceptively bland website, considering the disturbing subject matter. It’s also pretty uninformative. The FAQs are full of apologetic redactions, mostly due to the “sensitive nature” of the business and a desire for client confidentiality. In fact, it’s so uninformative that we’re hoping it’s just a cleverly worded hoax… because the other option is that there really is a whole community of rich weirdos walking around in shoes made of human skin.

So, if you have a Hannibal Lecter or a Patrick Bateman in your life, this would definitely be the perfect place to start shopping for a Halloween gift. It’s just too bad that thanks to high demand, the site has apparently been unable to take on any new clients since 2011.