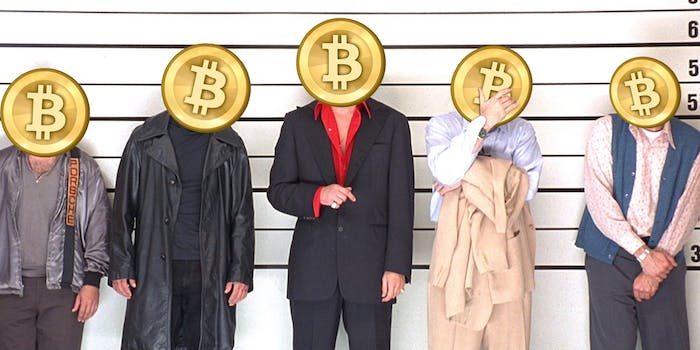 It's the Bitcoin community's oldest, most maddening endeavor: speculating and refuting possible Satoshis.

Bitcoin enthusiasts and gawkers alike reeled from Newsweek‘s report that founder Satoshi Nakamoto, widely believed to be a pseudonym for one or multiple programmers, was actually, really, just a guy, actually named Satoshi Nakamoto: a 64-year-old family man living outside of Los Angeles, as math-savvy as Bitcoin’s creator would have to be, who shyly avoided the limelight once it became clear he’d created a monster.

But hold up. In no uncertain terms, that man told the Associated Press later that evening that no, he was not the man everyone’s looking for, and he first heard about the digital currency when Newsweek came knocking. (To be fair, the real Satoshi, who clearly wants his privacy, would maybe say something like that.)

Either way, this just means mainstream press is just the latest to engage in Bitcoin’s oldest, most maddening endeavor: speculating and refuting possible Satoshis. Speculation has ranged so widely that I’m not even going to pretend this is comprehensive history, or that the cited sources are the first time they appeared anywhere on the Internet. Instead, it’s a loose one, a mere cornucopia of fake Satoshis that people believed in at one point or another.

Bitcoin and Satoshi came on the scene together when a paper called Bitcoin: A Peer-to-Peer Electronic Cash System appeared on a cryptography listserv, signed with his name. “None of the list’s veterans had heard of him,” Wired wrote three years later. “Google searches for his name turned up no relevant information; it was clearly a pseudonym.”

A user identifying himself as Satoshi Nakamoto announced on the P2P Foundation message board introduced Bitcoin. His profile listed his location as Japan and his age as 38. He would go on to occasionally communicate with other users, though sporadically, and he never shared personal details. The fact that he seemed to speak in Britishisms, though his original paper reflected a more American style, helped the theory that “Satoshi Nakamoto” couldn’t be his real name.

Bitcoiners, still totally in the dark about his identity, joke that “Satoshi Nakamoto” is a clever combination of the four Asian tech giants that created him: Samsung, Toshiba, Nakamichi, Motorola.

In one of the first definitive looks at Bitcoin, New Yorker writer Joshua Davis went to the Crypto 2011 conference. Davis noted Satoshi’s penchant for British phrasing, so he made note of nine British and Irish lecturers. Then narrowed his list—some had little software experience, some dismissed Bitcoin—before he settled was Trinity College’s Michael Clear, then 23, who pointedly avoided Davis’s question of whether he was Satoshi.

Later, Clear said he’d been joking, of course he wasn’t Bitcoin’s founder. But he emailed Davis with a great lead: “I also think I can identify Satoshi.” He named Finnish programer Vili Lehdonvirta, who promptly denied it.

The next day, Fast Company’s Adam Penenberg ran something of a rebuttal to Davis, who assumed a popular theory: not only that Satoshi Nakamoto is a pseudonym, it’s a clue: Satoshi can be translated from Japanese as “clear-thinking,” Naka as “inside,” and moto as “foundation.” (Clear thinking inside the foundation! That must somehow be a person!)

Penenberg found an obscure encryption software patent that oddly contained some of Satoshi’s phrasing. The names on that patent were Neal King, Vladimir Oksman, and Charles Bry. Oksman and Bry both flatly denied it. King said he had “had never heard of Bitcoin until this question came up.”

A discussion at the since-shuttered, Bitcoin-funded site bitquestion.com (archived) speculated Satoshi was actually Jed McCaleb. McCaleb founded the once-great Bitcoin exchange Mt. Gox and he sold that in 2011. Besides, the theory went, McCaleb was a big fan of peer-to-peer software, since he created the file-sharing site eDonkey 2000. And to top it off, finally, he’s a total Japanophile, at least according to the breathless bitquestion theorist. How could it not be him?

Redditor youarenofreddurstsir, touting advantages like “I am new to Bitcoin” and “I have Asperger’s,” put forth an elaborate theory on Reddit’s r/Bitcoin. He decided that the real Satoshi must be American, must be male, must have a certain kind of resume, and must know a handful of particular big names in cryptography. Therefore, he must be acclaimed UNC computer scientist Michael Reiter, who fits in each of those four categories.

A commenter on bitcointalk.org named rpietila produced either the saddest or creepiest theory: that Satoshi was Len Sassaman, a Belgian systems engineer who committed suicide July 3, 2011, about six months after the last known communication from Satoshi. Maybe the CIA was involved, rpietila suggested.

Ted Nelson, a 75-year-old futurist who in 1963 coined the term “hypertext,” posted a rambling YouTube video titled “I Think I Know Who Satoshi Is.” His answer was straight out of left field: renowned number theorist Shinichi Mochizuki, who met the requisites of being Japanese-American, not young, and brilliant at math, though the connection seems to end there.

Security researcher Dustin Trammell, known as a libertarian and an early Bitcoin adopter who emailed back and forth with Satoshi in the currency’s infancy, wrote a blog post called “I Am Not Satoshi.” In it, he promised he hadn’t actually been emailing himself.

Two Israeli scientists produce a study of the history of Bitcoin transactions, and come to a startling hypothesis of M. Night Shyamalan–level irony. Satoshi is actually Ross Ulbricht, who had recently been arrested as the kingpin behind the Bitcoin enabled black market site the Silk Road.

They retracted that idea the next day.

A blog called Like in a Mirror: Thoughts on Computing publishes its first and last post. It describes the author’s elaborate process to track down Satoshi via his paper, “searching the internet for highly unusual turns of phrase and vocabulary patterns.” If she was searching the entire Internet for a writerly match, the anonymous blogger’s choice was uninspired: Nick Szabo, an engineer, writer, and creator of Bitcoin precursor bit gold.

Szabo himself wrote in awe of Satoshi back in 2011, indicating he either wasn’t Satoshi or wanted to pretend he wasn’t. He did half-joke the real Satoshi could be Wei Dai or Hal Finney, who respectively authored their own Bitcoin precursors.

During a panel at Munich’s DLD14 conference, a bald white German identifying himself as something like “Chris Belzingam” (it’s hard to hear exactly what he says) outed himself as the “founder” of Bitcoin. “I wanted to build up an answer to our society and to the financial markets,” he said. “I was totally angry against our banking system and I lost a lot of money,” he explained. The crowd applauded him, perhaps gullibly, but the panel openly laughed at him. It’s not clear he was aware of the name “Satoshi.”

Despite a well-reported Newsweek story identifying Satoshi Nakamoto as Satoshi Nakamoto, plus what seemed a de facto admission from Bitcoin developer Gavin Andresen, and before the AP nabbed Satoshi’s rebuttal, plenty of Bitcoiners on Reddit’s r/bitcoin are convinced it’s somebody, anybody else.