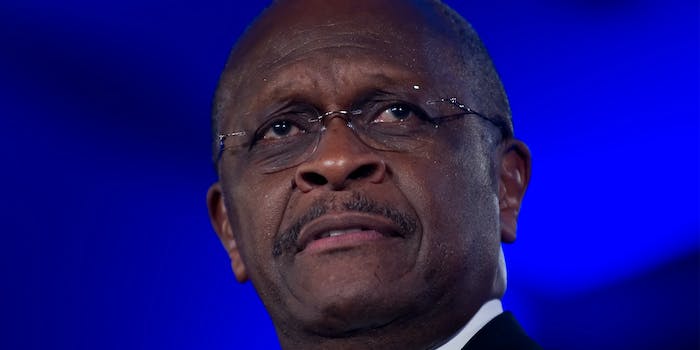 ‘He was so dumb’: Redditors from HermanCainAward sub called out for ‘doxing, harassing’ families of deceased COVID patients

The subreddit 'honors' people who die from COVID with the 'Herman Cain Freedom Award.'

A member of a subreddit called out their fellow members for allegedly doxing and harassing family members of recently-deceased COVID patients.

The subreddit, r/hermancainaward, “honors” people who die from COVID-19 with the “Herman Cain Freedom Award.” To be eligible for nomination, according to the page rules, a person must make a public declaration “of one’s anti-mask, anti-vaxx, or Covid-hoax views” and be admitted to a hospital with a COVID-19 diagnosis. Then, the “award is granted upon the nominee’s release from their Earthly shackles.”

Redditor u/OldManWonTon posted what was labeled as an “urgent PSA” on Tuesday night. It read, “Stop Doxxing/Harassing Deceased Covid Patients on their FB Timelines. This couple was a recent post on this sub. OP of that post did a bad job redacting their names and now their FB posts look like this.”

The post then revealed a screenshot of a Facebook user who was publicly mourning her loss. Her post read, in part, “Last night our world stopped,” and then, in direct address to the deceased, “You fought so damn hard; it was just too much for your body to handle.”

The post also featured a callous remark that a Facebook interloper made that used the first name of the deceased, reading, “I’d like to thank Michael for donating his COVID shot to someone with a brain. If he would have gotten the shot he would still be alive, and so would his wife, and his kids wouldn’t be orphans, but he was so dumb believing all the Republican lies that he’s a big dead fat corpse rotting away now.”

The award is named for Herman Cain, the former presidential candidate who famously refused to wear a mask at a Tulsa rally for then-President Donald Trump in June 2020. Cain opposed mask mandates and also downplayed the severity of the coronavirus. Cain died of COVID-19 complications less than a month after publicly acknowledging he’d contracted the disease that has killed more than 650,000 Americans and more than 4.5 million people worldwide.

Some redditors responded to the entreaty with a fair bit of skepticism, essentially blaming mourning family members for not making their settings private.

“Why do all these Republican Anti Vaxx Pro Trump Anti Science Pro Life DUMMIES have their default post setting to PUBLIC?” one asked in the post thread. “It takes a second to find any of them.”

“Because that’s their entire identity,” another surmised. “They are brazenly unashamed of their stupidity and want the entire world to know how stupid they are. No way they would hide their posts, even if they were smart enough to know how.”

The commenter then added, “To whomever reported this comment: I literally lol’d, so I’m sure you’re happy with that.”

Other group members expressed gratitude that the subreddit existed as a place to share their frustrations, perceiving anti-maskers to be prolonging the pandemic.

“I’ve been in lockdown 2 months now here in Vietnam and yeah, this sub helps vent frustration in a very macabre way,” said one, showing the group’s global reach. “I don’t take pleasure in it but it does feel like some karmic justice for the people who didn’t give a shit and spread covid carelessly, putting us all in this position.

The Redditor then went way back, pondering, “I often find myself thinking of the videos of spring breakers a year and a half ago and wondering what happened to them.”

The Daily Dot has reached out to u/OldManWonTon for comment.