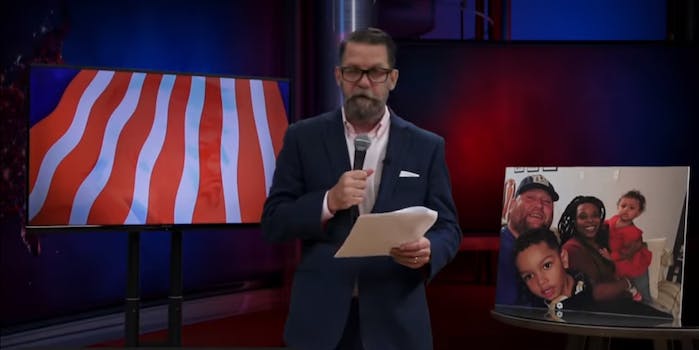 He's out as the supposed leader of the right-wing frat.

Gavin McInnes, the founder of right-wing chauvinist group the Proud Boys, has stepped down on the same week that the FBI labeled them as an extremist group. The 48-year-old announced his decision in a nearly 40-minute-long YouTube video, posted on Wednesday, in which he laments the “lazy journalism” that contributed to the need for him to distance himself from the organization.

McInnes repeatedly insists that he was never the leader of “the greatest fraternal organization in the world,” but that his lawyers have advised him that stepping down might ease the legal process for nine members of the group, whom he refers to as the “NYC nine.” He blames “rumors, and lies and terrible journalism” for the charges faced by the members of the “extremist hate-group Proud Boys,” following a violent altercation in early October.

The move by McInnes came the day after the FBI labeled the Proud Boys as “an extremist group with ties to White Nationalism.”

In the video, McInnes denies any ties between the Proud Boys and any form of extremism. “We disavow all forms of alt-right, white supremacy, white nationalism, etcetera, etcetera,” he says before plunging into a diatribe claiming none of those things exist.

“This whole idea of white nationalist and white supremacy is a crock,” he claims. “Such people don’t exist.”

Despite his claims, the Proud Boys are closely associated with all of the groups and ideologies he disavowed, and McInnes himself has been known to encourage violence. Proud Boys have been associated with many violent, racist incidents in recent years, including the deadly Charlottesville rally. He lamented how misunderstood the members of the group, self-labeled as “western chauvinists,” are.

McInnes, who co-founded Vice, has written extensively on topics of race and gender. In one column he claims that men are better than women when it comes to leadership and problem solving, following it up with “and ladies, if that hurts your feelings, just remember you have the ability to create life. You can’t complain about your lot in life when you’re magic.” It would take too long to explain the very non-magical, entirely biological process of creating life here, but perhaps McInnes should Google it.

The left is to blame for all of McInnes’ problems, according to his video. The Proud Boys are a mild, friendly group of bros just trying to get together and make some racist jokes—is that so wrong? Without the violent left constantly complaining, the Proud Boys would never be in the news, if you believe McInnes.

McInnes spends the majority of the video trying to vindicate himself and his group. He shows clips of his least toxic moments: speaking with people of color and even a few women, all set to uplifting music that would fit perfectly with a commercial for an erectile dysfunction drug. He claims again and again that white supremacy doesn’t exist, that racism is dead, and decrying the “myth of toxic masculinity.”

The video concludes with a signoff from McInnes. He repeats a phrase from the “great Jambi,” supposedly required of any Proud Boy leaving the organization, before pounding a Budweiser as the video fades.