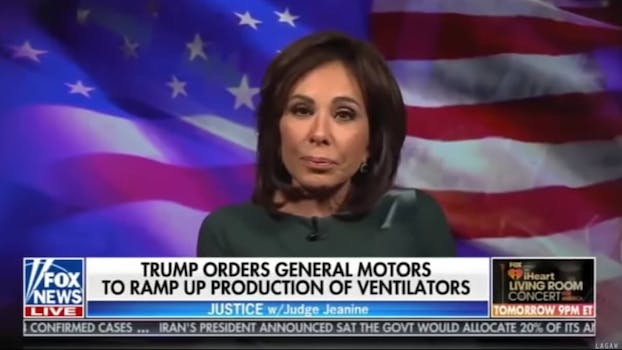 'Anyone who’s been as drunk as Judge Jeanine knows she did an amazing job tonight.'

After Fox News‘ Justice with Judge Jeanine was delayed for “technical difficulties,” its host Jeanine Pirro came on in what many are claiming to be a “disheveled” and “tipsy” state.

In a widely circulated clip, Pirro talks about President Donald Trump’s desire to reopen the country by Easter, April 12.

“Just the other day, the president talked—there was hoping about the possibility of reopening everything on Easter Sunday in a way where we could kind of come out of this quarantine, as loose as it may be, that we’re involved in,” she says before bringing on Fox News contributor Lisa Marie to talk about whether that is even possible.

Nearly half of Americans are under stay-at-home orders to help mitigate the spread of the coronavirus, which has killed more than 2,200 people in the U.S. Trump has repeatedly said he would “love” to open the country back up by Easter to get the economy back on track.

“Wouldn’t it be great to have all the churches full?” Trump said during one Fox News interview. “You’ll have packed churches all over our country. … I think it’ll be a beautiful time.”

Medical experts have warned against reopening the country so soon, and Trump has since backed off of the idea somewhat, saying, “We’ll only do it if it’s good.”

Yet, many could not get past the “condition” Pirro was in to pay any mind to the substance of the Saturday night segment.

A Fox News Channel spokesperson told the Daily Dot that Saturday night was Pirro’s first time broadcasting from her home.

“She encountered several technical difficulties which impacted the quality of her show, including the loss of a teleprompter. As we have previously said, we are operating with a reduced staff working remotely to ensure the health and safety of our employees in these unprecedented times,” the spokesperson said in an email statement.

A source close to the network told the Daily Dot that Pirro did not have access to a hairstylist or makeup artist, as she was working by herself from home. They added that Pirro was not drunk and doesn’t even drink.

People were flatly declaring Pirro to be “shitfaced” and “hammered” online.

She was accused of appearing more and more intoxicated after each commercial break and “eyeing her drink” while former Sen. Marsha Blackburn (R-Tenn.) was speaking.

“Something was not right with Judge Jeanine. Drunk? I do not know. But something. Whatever it was she should not have been on tonight,” Sabia tweeted.

Some pointed to an old Saturday Night Live skit, in which Cecily Strong portrays Pirro and is drinking on air, even falling out of her chair at one point.

However, some found Pirro’s alleged state endearing, with one demanding for Fox News to “Give her a morning show, you cowards” and another demanding another hour of “drunk Judge Jeanine.”

“Anyone who’s been as drunk as Judge Jeanine knows she did an amazing job tonight,” Twitter user @helen_manfred joked.