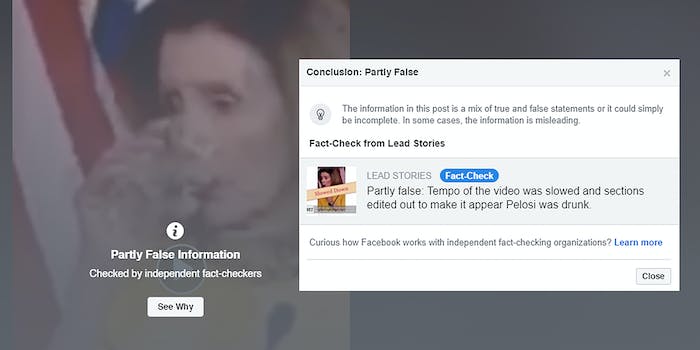 The post is similar to a fake Pelosi video from last year.

Another doctored video making it appear that House Speaker Nancy Pelosi (D-Calif.) is drunk and slurring her words has gained popularity on Facebook. The company has decided to label it “partly false.”

The video, which was first flagged by CNN, shows the California lawmaker speaking at a press conference. It is altered to make it appear like Pelosi is slurring her words and struggling to answer questions.

Since being posted on Thursday last week, the video had been viewed 2.4 million times. It appears to have been posted on Facebook after originally appearing on TikTok. The account on TikTok that posted the video is no longer active.

The video is similar to one in May last year that also was altered to make it appear that Pelosi was drunk. That video had also been viewed millions of times.

The new video now has a “partly false information” label attached to it that users have to click through before being able to see the video.

Facebook included a link to an article from Lead Stories, one of its third-party fact-checkers, that shows that the video has been slowed down from a May 20 news conference.

A Facebook spokesperson told the Daily Dot when a video is determined to be false, it’s “distribution is dramatically reduced” and that people who try to share it, or already have shared it, see warnings about the post.

“Following an incident over a year ago with a previous video of Speaker Pelosi, we took a number of key steps, making it very clear to people on Facebook when a third-party fact-checker determines content to be false and updating our policy to make explicit the kind of manipulated media we will remove,” a Facebook spokesperson said.

The video is still up on Facebook, meaning it likely does not violate the social media giant’s polices on manipulated media.

Facebook has faced criticism about its more lax approach to moderation, especially for posts made by President Donald Trump, when compared to how other social media platforms have treated the president.