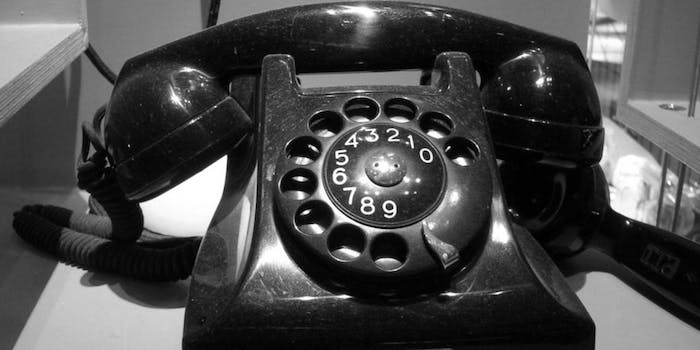 How to record customer service calls without breaking the law

Don’t call your cable company without reading this first

A video posted to YouTube back in August 2014 shows first hand the power of recording phone calls. This is especially true when it comes to dealing with customer service representatives who might not always have your best interests at heart. It’s a good tactic—but before you hit “record,” you need to ensure that what you’re doing isn’t against the law.

Warning: The language in this video is very NSFW.

For those of you who aren’t able to listen to someone angrily swear about Comcast for 13 minutes, here’s a summary:

About a month before the call took place, Tim Davis had moved into a new apartment where cable giant Comcast was his only option for Internet service. He didn’t want to patron Comcast—just like a lot of other people—but he had no other choice. A week after signing up for service, however, his Comcast equipment crapped out—a big problem for Davis, who works online from home.

Davis called Comcast, and a customer service rep told him a technician would come to fix the problem. The rep said there would be no charge for visit, but Davis, being skeptical, secretly recorded the call.

Shortly after the technician fixed the problem, Davis noticed a trio of charges amounting to $181.94. After getting the run-around with multipe Comcast customer service reps, who refused a refund, Davis played his trump card.

?I have a call recorded where the agent tells me, in no uncertain terms, that there will be no charge. …You cannot bill me for something that I did not authorize,” he tells a rep. ?You cannot tell that it’s free, and then bill me anyway, and then tell me that you cannot unbill me or credit me for the bill. You cannot do that, it’s illegal. Do you understand?”

Davis then does something supremely satisfying: He plays the recording of his first call for the rep. After that, he finally got his refund. Davis’s conclusion? “Always record your calls with big companies.”

This call is being recorded

Davis’s strategy is a good one, but it does come with some potentially thorny legal issues.

Under federal law, only one party in a conversation has to give consent to record a phone call. But each state also has its own rules on the subject. All but a few states require dual-party consent—meaning both people involved in a phone conversation have to give explicit consent before a call can be legally recorded. If you’ve ever wondered why most customer service calls at big companies start with pre-recorded messages letting you know that ?your call will be recorded for training purposes,” that’s why.

In his description of the video, Davis insists that, even though he never informed Comcast he was recording the calls, what he did was perfectly legal because Comcast told him the company was doing a recording of its own.

The agent has a reasonable expectation that the call may be overheard or recorded. Thus, no law is being broken. You can continue to be wrong as long and as loudly as you like, but you’re still wrong. The law does not provision selective consent.

Although, a day after he initially posted the video, Davis added the following (all-caps) disclaimer:

NOTHING IN THIS VIDEO IS MEANT TO BE TAKEN AS LEGAL ADVICE. CHECK YOUR LOCAL STATE AND FEDERAL LAWS PRIOR TO RECORDING/DISTRIBUTING ANY RECORDED CALLS.

Dave Maass of the Electronic Frontier Foundation (EFF) argues that what Davis did is likely illegal. ?Just because Comcast told the customer that the call was being recorded, that doesn’t mean it’s legal for him to record the call without notification,” Maass tells the Daily Dot. ?To stay on the right side of the law, everyone has to let everyone else know if they’re recording a conversation.”

As such, if you decide to start recording your customer service calls, it’s a good idea to ask the customer service rep if it’s okay before hitting the little red button. In this case, it may be better to ask permission than forgiveness.

Representatives of Comcast didn’t respond to a request for comment about the company’s policy toward letting customers record service calls. However, if you frame it as being only fair because they’re recording the call anyway, it would be difficult argument for any company to refute.

Where does your state stand?

Laws regarding the recording of telephone conversations—typically called “wiretap laws”—fall in to two basic categories: one-party consent, and two-party consent. In many two-party-consent states, all parties on the call must consent. At the moment, 18 states and the District of Columbia have wiretap laws on the books. It’s important to note that the location of the person you’re recording matters when it comes to state laws. Here’s a quick rundown of each state’s law, according to the Digital Media Law Project:

Even if you don’t see your state on this list, make sure to check all applicable state laws before recording anybody.

Arm yourelf with an app

So, you’ve decided to you want to record a call—what’s the best way to go about doing it?

In the video’s description, Davis reccomends a free program for recording calls made over Skype. This system is fine, assuming you’re using Skype. But, if you’re calling from a smartphone, you’re going to need a different system and a perfect app for that is called TapeACall.

TapeACall, which runs on both iPhone and Android phones, lets users record any conversation at the touch of a button. Those recordings are stored on TapeACall’s servers and can be played back instantaneously on the device. The files can also be exported and saved on the phone or a computer in .mp3 format.

The service is free for 60-second clips, but costs $9.99 for a version with unlimited recording time. (Full disclosure: I use TapeACall almost every single day doing reporting and can personally attest that it’s magical).

Paul Stockford, research director of the National Association of Call Centers, said he doesn’t think it’s especially commonplace for customers to record their calls with customer service reps. ?I’ve seen isolated incidents,” he said. ?But I don’t know about this being any kind of trend.”

Recent events indicate that it may soon become one.

A few weeks ago, another dissatisfied Comcast customer released a legendarily painful recording of a company rep making every possible excuse to avoid letting him cancel his service. The call went massively viral and became a huge black eye for Comcast, which is in the process of waging a publicity campaign to convince federal regulators to approve its proposed merger with Time Warner Cable.

In short, your best weapon against bad customer service may be a recorded call. Just be careful before you use it.