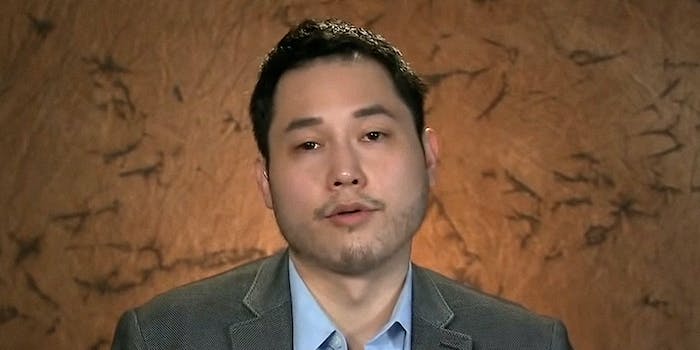 They say Ngo reposted their videos without permission, leading to online and physical attacks from his audience.

Update 2:58pm CT, Dec. 23: According to Andy Ngo’s lawyer, Harmeet Dhillon, the case against Ngo was dismissed after the plaintiffs withdrew their case.

Two journalists have filed a lawsuit against Andy Ngo for copyright infringement. Journalists Grace Morgan and Melissa “Claudio” Lewis say that Ngo downloaded and tweeted their videos without permission. Their suit seeks damages and a permanent injunction prohibiting Ngo from posting their videos without express consent.

Ngo, a far-right provocateur who describes himself as a journalist, has often been criticized for using others’ content without consent. He’s also routinely accused of taking said content out of context or deceptively editing it to malign people he deems antifa—a label he applies liberally to people irrespective of whether they are affiliated with antifa groups or identify as antifascist.

The plaintiffs claim that they’ve been harassed and attacked as a result of Ngo reposting their videos. They filed suit on Dec. 8 in the Oregon United States District Court.

“This has resulted in instances where Plaintiffs were physically attacked by Defendant’s followers.”

While they claim Ngo has repeatedly posted their videos without consent, they’re only suing over one apiece. The videos were tweeted on Oct. 1. The suit states that they registered their respective videos with the federal Copyright Office in November.

The videos have since been removed from Ngo’s Twitter account “in response to a report from the copyright holder.” Archives of Ngo’s account show that he reposted the videos and credited Morgan and Lewis. In each case, he changed the caption to include “antifa” and construed the video differently from what Morgan and Lewis had reported.

Lewis captioned the video, “MultCo tried to bust out, but found their gate wasn’t working.”

Portland is in Multnomah County, which is often shortened to MultCo.

When Ngo reposted it, he wrote, “Police observe the rioting #antifa from behind a gate in downtown Portland last night.”

He similarly altered the context of Morgan’s video.

Via direct message on Twitter, Morgan told the Daily Dot that they’re hoping to make it harder for Ngo to “steal” journalists’ content, and change the narrative of their reporting—”something he has built his career off of.”

Morgan added that Ngo reposting their content has put both at risk.

“An indirect result of Andy posting our work without consent or permission is that both of us have been doxxed, repeatedly, by his followers—who align with the far-right and oftentimes opening adjacent to recognized hate groups.”

Morgan said people have threatened her at home, harassed her at work, and made death threats against her family.

“Many times the harassment has gotten so severe that it’s interfered with my ability to simply do my job and generate content [live] from the ground,” she said.

“When all this hits, you know Andy must’ve taken something of yours and his fans have been set on you,” she added.

“Andy Ngo gets to break the Twitter rules all the time,” Lewis said. “If I had violated DMCAs that many times, my account would no longer exist. Why Andy gets a permanent pass I can only guess.” (DMCA refers to the Digital Millennium Copyright Act.)

“If Twitter survived without Donald Trump, they can certainly survive without Ngo.”

Via email, Ngo’s attorney Harmeet Dhillon told the Daily Dot that the case is “frivolous” and “Antifa agitprop masquerading as a copyright claim.”

“These claims are destined to fail—again—and we look forward to that day,” Dhillon said.

Lewis’ and Morgan’s attorney Alan Kessler told the Daily Dot via email, “I am grateful that our clients are brave enough to stand up to a prolific bully.”

“Andy Ngo is running his grift on the back of hardworking independent journalists. Bad behavior should not be rewarded, and we plan to put a stop to it.”