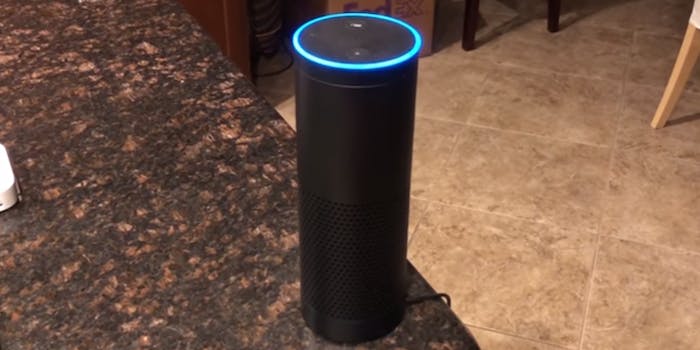 A video posted by Twitter user @FrameGames shows where Alexa stands on the Black Lives Matter movement, a prominent grassroots effort and international network that campaigns against systemic racism and police brutality.

And when asked if it was a feminist, Alexa replied: “Yes, I am a feminist, as is anyone who believes in bridging the inequality between men and women in society.”

The Daily Dot conducted both tests using a first-generation Amazon Echo and received the same responses.

Conservative users hit out at Amazon on Twitter, accusing the company of spreading left-leaning ideology to Echo customers.

Others are praising the smart speaker for recognizing social movements that campaign for equality.

Often Alexa can’t play my @Springsteen music on command, but her ability to answer and be articulate about the black lives movement makes up for it 10x. #wefinallyundetandeachotheralexa #BlackLivesMatter

Beliefs aside, it’s extremely unusual for a company to support polarizing social movements through its products, seemingly imposing its beliefs on the more than 15 million Echo owners. That said, Silicon Valley companies have become more political since President Donald Trump took office. Several leaders, including Amazon CEO Jeff Bezos, have publicly hit out at the Republican president.

Far-right leaning personalities have since accused those companies of exploiting their platforms to spread liberal sentiment. Just last month, conservative commentator Steven Crowder posted a video on YouTube calling Alexa an “SJW Liberal.” In the video, which received more than 1 million views, the smart speaker appears to call Jesus Christ a “fictional character.” We were unable to replicate the response in our tests.

It’s still not clear if these responses were programmed directly by Amazon or if the company is even aware of them. Amazon’s smart speakers get their answers from a variety of sources, including Wikipedia pages, third-party developed voices, and services like Accuweather or Pandora. Other responses, however, are built-in to the device by Amazon devs. If these answers did come from its developers, the company is walking a fine line, supporting causes that could turn off a large portion of its customer base.

We have reached out to Amazon to find out more and will update this article if we hear back.