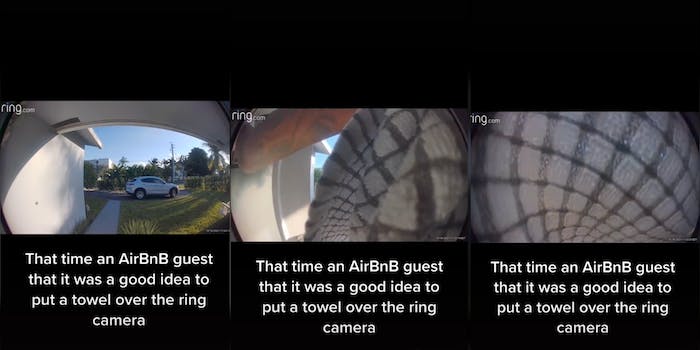 ‘It’s no different than staying at a hotel with cameras’: Airbnb host calls out guest for covering Ring camera, sparking debate

A TikTok of an Airbnb guest covering up a Ring camera has sparked debate about guests’ right to privacy when renting out someone else’s home.

In the video, only the guest’s tattooed arm is visible. The person places a checkered towel over the camera lens. The person struggles a bit at first to get the object to stay, but is eventually successful in covering the device.

“That time an Airbnb guest [thought] it was a good idea to put a towel over the ring camera,” the host writes in the overlay of the video.

In the caption of the TikTok, the host refers to the guest as a “bonehead” and uses the hashtag “idiot squad.”

The viral video has more than 3.3 million views and sparked a lot of heated conversation in the comments section. People are divided over whether the host should be able to surveil their property using security cameras. Some viewers say cameras allow hosts to check if guests are following the rules of the rental—like not bringing more than the allotted number of guests. Others feel like it’s an invasion of privacy.

One commenter defending the homeowner said the guests wouldn’t “need to cover it unless they are sneaking in extra people or things they shouldn’t have in someone else’s house.”

“Yeah no, this sus. They could bring in a ton of people or animals or things not allowed or steal from the home, [you] never know,” Sierra Gray commented.

Echoing Gray, another person said the hosts have a right to protect their property, especially if it was included in the listing or the guests were informed prior. Airbnb allows hosts to have disclosed cameras in common spaces.

“It’s no different than staying at a hotel with cameras,” Leeann Richards responded.

On the other side of the spectrum were comments saying that at this point, with all of the hassle of Airbnb and scaling prices, they’d rather just stay in a hotel.

“I don’t understand why anyone would ever choose an Airbnb over a hotel. Cameras? Chores to do? And all for basically the same price. No thanks,” one commenter wrote.

Several people added that the difference between a camera in a hotel and an Airbnb is that there isn’t the worry of potential privacy invasion by being featured on a host’s social media without consent.

Others were creeped out at the thought of being surveilled. One person said, “Imagine going outside to talk on the phone and have someone just listening in.” Another said it makes them uncomfortable to know someone “knows when I’m coming in and out of the house at every second.”

The Daily Dot reached out to the host via TikTok comment.