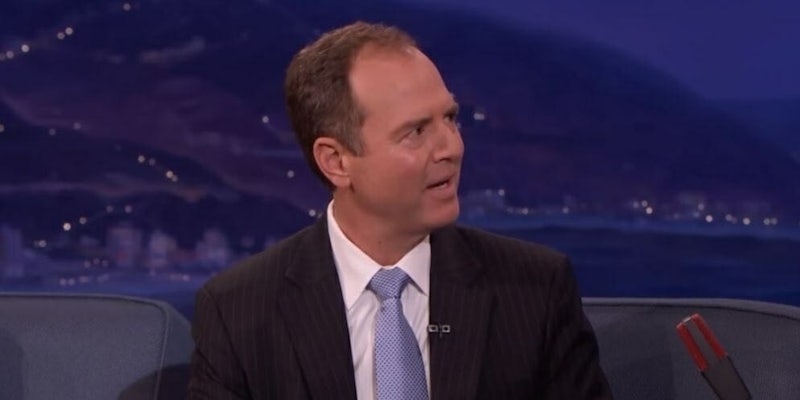 All the conspiracy theories about incoming House Democratic leadership

The Democratic takeover of the House of Representatives has led to a flood of conspiracy theories both before and after the election.

Those plots all fizzled out without evidence, and Democrats made massive gains in the House. So the conspiracy theory movement shifted to plots about the Democrats who would be taking power—and specifically, about the committee chairs about to take control of intelligence, finance, and crucially, oversight over the Donald Trump administration.

The biggest target of these conspiracy theories has been California Representative Adam Schiff, poised to jump from Ranking Member to Chair of the House Intelligence Committee, and take control of the investigation into President Trump’s involvement with Russia.

Schiff’s constant TV appearances and poking into the Russia scandal, all while Republicans were doing everything possible to sweep it under the rug, have made him fodder for all sorts of deranged conspiracy theories. Murder, mayhem, and deep state depravity have all been laid at Schiff’s feet—all without any evidence.

Earlier in 2018, a conspiracy theory started making the rounds in the right-wing swamps that Schiff was related by marriage to George Soros—specifically that his sister Melissa is married to Soros’ son Robert. Supposedly, these ties between Schiff and Soros color everything he does on the Intelligence Committee, making Schiff less a truth-seeking crusader, and more a tool of Soros’ deep state empire.

The biggest problem with this theory is that Adam Schiff doesn’t actually have a sister, only a brother. George Soros’ son Robert DID marry a woman named Melissa Schiff in 1992, but their New York Times wedding announcement lists her as parents as “Marlene S. Schiff of New York and the late Dr. Haskel Schiff,” while Congressman Schiff’s parents are Edward and Sherrill Ann.

#QAnon
Who knew? I didn't.
Robert Soros, son of George, was married to Mellissa Schiff, sister of Adam Schiff
Neat liddle club they have, don't they.
Guess what? They were into art. Art and pedos seem to go hand in hand.https://t.co/g0alrzAWSb

While the rumor was going around, Snopes contacted Schiff’s office, which confirmed that Schiff doesn’t have a sister, and that he’s not related to Melissa Schiff.

That isn’t the only rumor that’s followed Schiff around, nor is it even the most sinister.

For most of 2018, Schiff has been linked to something conspiracy theorists refer to as the “Standard Hotel Incident,” referring to a hip hotel in West Hollywood, a part of town Schiff represents.

To be sure, while conspiracy theorists agree that the “Standard Hotel Incident” definitely happened and that Schiff was definitely involved, what exactly the incident was and what Schiff actually did have proven to be more elusive to a crowd that has no problem making up tenuous connections.

In fact, nobody has actually linked Schiff to anything that happened at the Hotel, and there haven’t been any arrests regarding any unusual activity at the hotel in the time that Schiff has represented that district (due to redistricting, Schiff has only represented West Hollywood since 2013.)

The crash itself certainly did happen, as the helicopter that three executives were flying in went down shortly after taking off, appearing to lose power and slam into a house in a gated community in Newport Beach. But what this has to do with Schiff isn’t clear, other than the place where the passengers worked happening to be in Schiff’s district.

Beyond that, it seems like conspiracy theorists are content to rhetorically pester Schiff on Twitter, rather than delve into what actually might have happened. This is the certainty that conspiracy theories offer—you know something bad happened and that someone you don’t like was involved—even if you don’t know what it was, when it took place, or what actually happened.

Twitter was the source of another completely unsourced and unevidenced rumor about Schiff, that he paid out an undisclosed sexual harassment settlement brought by a 19-year-old male intern in 2013. The attribution for this story was merely “congressional sources,” yet numerous QAnon accounts got tens of thousands of retweets spreading it around.

Despite the breathless spreading of the rumor, not a single actual news source picked it up, not even the far-right outlets predisposed to dig up dirt on a constant irritant to the president.

Of course, Adam Schiff isn’t the only prominent Democratic House chair to draw the ire of the conspiracy theory community,  just the one most often hit.

New York Rep. Jerry Nadler is now in line to take over the powerful Judiciary Committee, where impeachment of the president would be initiated. As such, Nadler has been linked to a nebulous conspiracy theory involving Nadler running cover for Google’s apparent (though unproven) censorship of prominent conservative sites—supposedly while hiding massive donations from Google to Nadler’s re-election.

While Nadler did receive about $27,000 in donations from Google’s parent company Alphabet, most came in the form of small donations from employees, rather than a large donation from the company.

Then there’s incoming chair of the Committee on Oversight and Government Reform, Rep. Elijah Cummings (D-Md.), who has been accused of playing a major role in a nebulous conspiracy to remove Donald Trump as president using the testimony of Michael Cohen, despite Cummings himself downplaying the idea of immediate impeachment (which his committee isn’t even involved in.)

Finally, Financial Services Committee Chair Rep. Maxine Waters (D-Calif.) has been the subject of innumerable attacks from the president himself, who has insulted Waters as “an extraordinarily low IQ person” who should “be careful.”

Waters is also seen by conspiracy theorists as a Clinton crony who “looked away” while Hillary sold American uranium to Russia, and Bill reaped massive speaking fees from Russia. Even Fox News’ Tucker Carlson has intimated that Waters supposedly couldn’t afford her large house in South Los Angeles, and must have paid for it with illegally obtained money.

Once Democrats take over the House and begin the investigations and oversight they’ve promised to conduct, expect the conspiracy theories to get louder and more numerous.

Like these, most will be either completely made up or based only on rumors. They’ll be pushed by anonymous Twitter accounts, getting tens of thousands of shares with no evidence, and eventually, make their way into more mainstream conservative news sources.

Given all we’ve seen, it’s likely a few will even reach the Twitter account of the president—who will have every incentive to spread them.