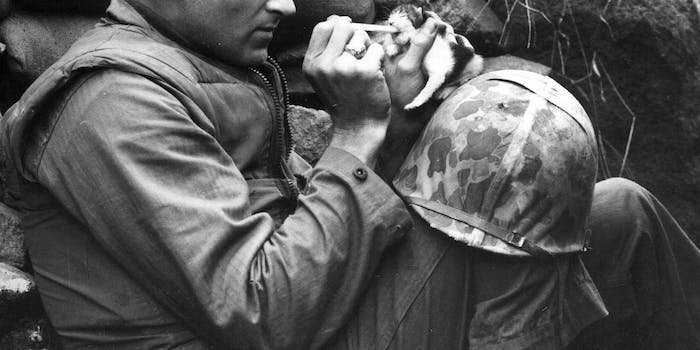 Kindness to a kitten spans generations

One Marine's kindness to a kitten during the Korean War makes Reddit's frontpage, almost 60 years later.

Frank Praytor, the marine whose kindness towards a kitten during the Korean War was captured in a 1952 photograph, told the Daily Dot he is “kind of amazed and a little bit flattered” to hear the image has become a huge success online.

The image, titled “The Marine and The Kitten,” hovered on the front page of social news site Reddit’s r/pics section today, where it was viewed over 120,000 times, according to image hosting site Imgur.

In the photograph, Praytor is seen leaning against sandbags with a pistol holstered to his hip and his helmet resting on his knee. In his left hand he holds a kitten, nursing it delicately with a medicine dropper.

Praytor, 83, a combat correspondent in the 1st Marine Division from from 1951 to 52, wrote about the photo in detail in a 2009 article published in Graybeards, the official publication of the Korean War Veteran’s Association.

Praytor wrote that the kitten was one of two who were orphaned after a solider shot their mother for “yeowling.” The solider who adopted the other kitten killed it after rolling over on it in his sleep.

But Praytor’s kitten survived. He called her Miss Hap (as a play on the unfortunate circumstances surrounding her birth) and weaned her on meat from ration cans. After Praytor left her to return home, she became something of a mascot for the company’s public information office.

Praytor believes another soldier, corporal Conrad Fisher, eventually adopted her, and brought her home to the states.

It’s the second round of publicity for a photograph published over a half-century ago.

According to Praytor, the Associated Press picked up the photograph in 1953, eventually distributing it to over 1,700 newspapers throughout the world, including the New York Times.

It made him a celebrity, of sorts. He said he received letters from all over the country.

Even his parents in Birmingham, Ala., “got a whole lot of letters and calls from people at the time” he told the Daily Dot.