Four years after the Internet backlash killed Katherine Heigl’s career, the actress is trying to mount a comeback. Is Hollywood ready? 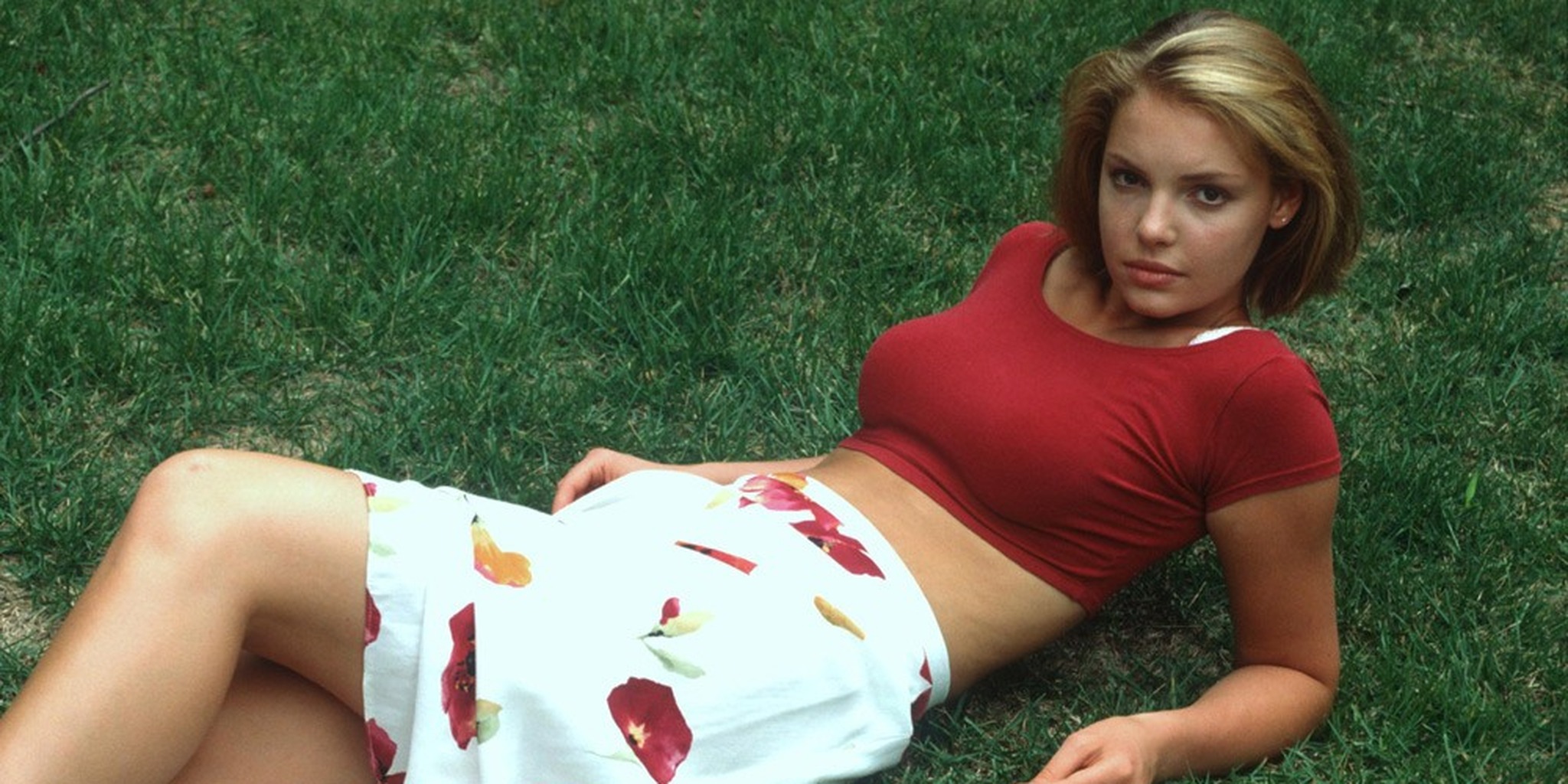 For those who don’t remember, it was only four short years ago that Katherine Heigl graced the cover of Entertainment Weekly to literally beg for your forgiveness. Today, not a lot has changed. After a string of disappointing performances at the box office, Heigl is still trying to repair her damaged career. This year, for the first time since she exited Grey’s Anatomy, Heigl will return to television, with a starring role in NBC’s State of Affairs.

In the latest issue of Marie Claire, Heigl elaborated on why she thinks her career stalled, and her answer boiled down to one thing: romantic comedies.

“I had an amazing time. I love romantic comedies,” Heigl says. “I was so stoked to be doing them. But maybe I hit it a little too hard. I couldn’t say no. There’s nothing wrong with them, but maybe I overloaded my audience. I should have done a superhero movie or a psychological thriller.”

Heigl isn’t wrong in suggesting that diversifying her output would have been a good move. But unfortunately for Heigl, her remarks speak to a larger problem in Hollywood not only about romantic comedies but about the ghettoization of actresses who make romantic comedies.

In 2012, Vulture ran a story on Kate Hudson, exploring whether she could escape the scourge of the bad romantic comedies that have plagued her for much of her career. The piece branched out to consider Reese Witherspoon and Cameron Diaz’s futures in Hollywood, too, but for all three of them, predictions were grim.

One former studio chief was quoted in the piece as saying that Hudson and her peers need to do movies written specifically for them, but that because of their ages, those movies aren’t being written.

“She is known, pretty, and relatable… But I don’t know what her prospects are—and not because of her, but because the genre of romantic comedy is kind of confusing right now … I think she and all the women in her age group… need roles tailored for them and that those kinds of movies are not being written… What movie would you make for them… They can’t date anymore, they’re all mothers. After a while, trying to extract the same story from the same tropes gets old.”

A literary agent that Vulture spoke to was even harsher about the situation, saying, “These actresses? They’re fucked. Good luck to Kate and Reese. When Cameron [Diaz] was getting cold, she bet on herself, took just a million dollars on Bad Teacher. But even that’s not a romantic comedy. The mid-budget studio film—what used to be the sweet spot for romantic comedy—is getting painfully squeezed.”

But to declare these actresses “fucked” is too simplistic an analysis. As mentioned above, Diaz did well recently with Bad Teacher, not to mention this year’s The Other Woman. And Jennifer Aniston, who’s also briefly mentioned in the article, scored a sleeper hit with last year’s We’re the Millers.

Then there’s Matthew McConaughey. While McConaughey’s career throughout most of the 2000s showed that men can fall prey to the romantic comedy curse, too, the recent Oscar-winner is living proof that the curse is escapable. In fact, since leaving rom-coms behind, his output has been almost shockingly good.

But McConaughey’s success is also emblematic of the divide between men and women in Hollywood. Consider the actress who’s probably closest to him in terms of career trajectory—Sandra Bullock. Bullock spent years trapped in romantic comedy jail before hitting it big with her Oscar-winning turn in 2009’s The Blind Side. And in 2013, EW named her “Entertainer of the Year” for her work in back-to-back hits The Heat and Gravity.

However, whereas McConaughey actively pursued the kind of darker, more complex material that he knew would get him noticed, Bullock fell into The Blind Side accidentally. Overtime, she’s made it clear that she pretty much hates romantic comedies, telling The Guardian, “Usually comedy is only available to us ladies in the romantic comedy. That’s why I hate romantic comedies. I want to make comedic-comedies—let’s get back to being funny!”

In retrospect, it’s easy to see the kind of strange position Bullock was in. On the one hand, she didn’t want to do romantic comedies, but on the other, she didn’t want to star in the kind of film some have called a “white savior movie.” But due to its incredible success at the box office (over $300 million worldwide), The Blind Side elevated Bullock all the way to the Oscars. Now, she has the opportunity to take on prestige projects, like Gravity, and “comedic-comedies,” like The Heat, that she would have been barred from before.

That the circumstances that led to Bullock’s career turnaround were unintentional, as opposed to orchestrated like McConaughey’s, is important. After all, a Newsweek article by Sarah Ball, published just a few months before The Blind Side’s release and entitled, “Why Is Katherine Heigl So Annoying?”, includes the detail that, “On Google, ‘I Hate Katherine Heigl’ (27,000 hits) outpaces ‘I Hate Sandra Bullock’ (14,000 hits).” And Bullock’s divorce has continued to be picked apart very publicly, way beyond the point of decency.

Why do people “hate” romantic comedy actresses like Heigl and Bullock? In analyzing the Newsweek article, Jezebel’s Dodai Stewart concludes, “It seems that, repeatedly, there’s always one female star—very often blonde—thrust into the spotlight, built up as the next big thing…and the only thing the public loves more than adoring her when she first explodes in popularity is tearing her down when they’re bored with her.”

Evidence strongly supports Stewart’s theory. The negative bent to Vulture’s Kate Hudson breakdown paints a portrait of a fresh, young, ingenue who burst onto the scene with Almost Famous and has since become an old, dried up, romantic comedy hack. And Ball’s Newsweek piece asserts that people used to find Heigl “refreshingly daring,” only to conclude that “Heigl seems unable to see the acreage between oversharing and keeping her mouth shut.” Even America’s current sweetheart, Jennifer Lawrence, has faced a growing backlash as of late.

It has become clear that the system which grinds up and spits out romantic comedy stars is broken. But there are several ways to fix it.

Women buy as many or more movie tickets than men, but the discrepancy between female-centric movies and male-centric movies in Hollywood remains overwhelming. The first step to fixing this is to create more roles for women across the board. The idea that women who star in romantic comedies aren’t getting more roles written for them supports the idea that there are only a few kind of roles for women out there in general. To allow women to jump from genre to genre in their careers, this has to change.

Oscar-winner and founder of the Geena Davis Institute on Gender in Media, Geena Davis, has talked about this a lot in the past few years. In 2011, Davis asked, “When are we going to get over the idea that it’s shocking that women can do things?” And Girls’ Lena Dunham echoed as much in March, after noticing the offers the show’s male lead, Adam Driver, was getting. “People are ready to see Adam play a million different guys in one year—from lotharios to villains to nerds,” said Dunham. “Meanwhile [co-stars] Allison Williams, Jemima Kirke and Zosia Mamet are still waiting for parts they can get interested in.”

In advocating for more female roles, it might be tempting to assume that romantic comedies are part of the problem—but this is not necessarily true. The challenge is to inject the same kind of nuanced roles for women into romantic comedies that should also be injected into every other genre. If anything, women should be more involved in romantic comedies. And as Erin Gloria Ryan at Jezebel purports in an op-ed called “The Rom-Com’s Not Dead. Hollywood’s Just Lazy,” they should be involved at every level.

“The problem is that there aren’t enough people in Hollywood who understand why women watch romantic comedies making movies—there aren’t enough women. Last year, only 18 percent of directors, writers, executive producers, producers, cinematographers, and editors working on the top 250 grossing box office films were women, a 1 percent increase since 1998. That’s fucking embarrassing…but rather than involving more women to update the rom-com formula and compete with better, independently-produced films and TV, studios essentially asked a bunch of dudes what they thought women wanted and then got frustrated and blamed the audience when those dudes weren’t right.”

Continuing from there, it’s not just one kind of woman that needs to become more visible either. For instance, in 2012, the MPAA found that :atinos represent 25 percent of all moviegoers. Yet, as Dodai Stewart asks, “Where are the brown-skinned versions of the Kates, the Reeses and the Camerons? Who are the POC alternatives or equivalents? Where are their romcoms? Where is the next Latina rom-com superstar? Does Jennifer Lopez have no heirs?”

Finally, after all the meditations on why romantic comedies aren’t better, on what can be done to save them, and on whether they’re dead altogether, one unfortunate truth about the stigmatization of the romantic comedy and the women who star in them remains. And that’s that men are ruining the genre. Not just the men who are involved in making these movies either, but the men who won’t go see them.

In February, LA Weekly ran an epic investigation on the rom-com’s mighty decline. While all of what they found was fairly predictable (better talent needs to be involved, they don’t play well overseas, people like superheroes movies), one takeaway was singularly troubling. As director Nancy Meyers observes, “Women will go to movies about men, yet men may not go to movies about women…So as long as that theory prevails, I suppose no one feels the need to change the status quo.”

To make matters worse, writer Amy Nicholson actually talked to a marketing executive for a major studio who basically said, “In development meetings, there’s a tacit agreement that a male ‘no’ carries more weight than a female ‘yes.’ Why should studios risk selling guys on a romantic comedy when they can rely on guys selling their girlfriends on Transformers?”

There’s an obvious temptation here is to say, “Who cares if men don’t like romantic comedies? People shouldn’t have to like anything they don’t want to.” And this is true. But a policy that dictates a male “no” outweighs a female “yes” is sad. It says that women’s tastes are lesser, that women’s opinions are lesser, and that ultimately women themselves are lesser. No wonder Katherine Heigl has been sentenced to romantic comedy Hell—she’s just a woman, who makes stupid woman movies for other stupid women.

Taken to its most extreme conclusion, men’s inability to buy a ticket to a romantic comedy is a symptom of America’s masculinity crisis. Sure, most men probably just don’t like romantic comedies. But that doesn’t mean they need to reject their existence for fear they won’t seem “manly” enough.

There is plenty to dislike about romantic comedies. But Katherine Heigl isn’t a worse actress for having done some and neither is Katharine Hepburn, or Meryl Streep, or Tom Hanks, or Charlie Chaplin. Like any genre, in the right hands, the romantic comedy can be terrible or wonderful. The only thing inherently wrong about romantic comedies is when they are used to put women in a box, so men can feel secure at the top of the Hollywood food chain.

Photo via friskytuna/Flickr (CC BY 2.0)