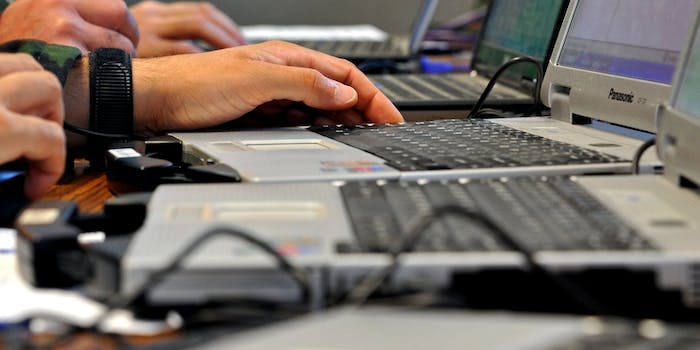 Picture this: An American special operations team that can shoot, move, and communicate alongside some of the best units in the U.S. military but also possess hacking and cyberwarfare skills that would make Anonymous blush?

As militaries across the globe attempt to keep pace with the advancements of the information age, where the line between cyberwarfare and actual combat continues to merge—the idea of a cyber “A-Team” isn’t as outlandish as it may initially seem.

With the creation of U.S. Cyber Command in 2009, and more recently President Barack Obama’s announcement of a new task force to combat the Islamic State online, the U.S. military and others across the globe have been in a pseudo-arms race to weaponize—and dominate—cyberspace.

From massive phishing and active denial service attacks against American targets from masked IP addresses by China and other U.S. adversaries to the infamous Stuxnet virus reportedly released by Israeli intelligence to cripple Iran’s nuclear program, modern warfare is becoming increasingly defined on how one can fight in cyberspace.

That fight, for the most part, has been defined by state actors—one nation pitted against another—focusing on taking out large targets such as regional military headquarters, nuclear weapons facilities, and even entire ministries or defense departments.

As Washington looks more and more to special operations forces to lead the ‘gray war’ against al Qaeda and ISIS, who better to conduct these type of kill/capture missions online than the quiet professionals who have been waging this kind of war against these groups for over a decade.

But some progressive military strategists are starting to argue cyberwarfare on a strategic level is somewhat ineffective against enemies such as al Qaeda and now Islamic State—whose reach online and on social media surpasses any one nation or border.

And as Washington looks more and more to special operations forces to lead the “gray war” against al Qaeda and ISIS, who better to conduct these type of kill/capture missions online than the quiet professionals who have been waging this kind of war against these groups for over a decade.

These new “Cyber Unconventional Warfare Pilot Teams” would be based, in part, on the makeup of a typical U.S. Army Special Forces Operational Detachment-Alpha, or “A-Team,” a small group of between 12 to 15 operators, according to Lt. Col. Patrick Duggan, a veteran of the Special Forces community who served multiple tours in Iraq and Afghanistan.

Once complete, the team would then actually get their boots on the ground to coordinate with the support group they cultivated online and execute their mission.

“Cloaked in dual-purpose technology, indigenous equipment, and mobilized networks, these teams would digitally initiate and then physically execute their assigned [unconventional warfare] operations from beginning to end,” Duggan said.

The promise of what a cyberwarfare “A-Team” could bring to American-led military operations is tantalizing, but challenging.

Recruiting the right kind of soldier, sailor, airman or Marine who has the physical and psychological characteristics needed to serve in special operations units, as well as having the technical know-how to be a top tier cyber operator, is a challenge to top leaders at the Pentagon.

Qualification and recruiting standards for teams like Army Special Forces and Navy SEALs are infamously high, with a large percentage of recruits washing out of basic training programs for those teams. On the cyberwarfare side, the Pentagon and intelligence community is finding it hard to attract new talent for their own cyber operations, unable to compete with the financial lure of the private sector.

Questions on whether the special operations community should take a larger role in cyberwarfare operations could also spark bureaucratic battles between the Pentagon and intelligence community. Both groups have already drawn battle lines over  U.S. drone operations, the hallmark counterterrorism tactic of the Obama administration, with each side arguing they should maintain control of those missions—and the federal appropriations that come along with it.

Finally, the addition of tactical cyberwarfare operations to the ever-growing mission portfolio of U.S. special operations command could strain the already-strained teams closer to the breaking point.

Concerns in Washington are already surfacing over the Obama administration’s efforts to increase the role of special operations forces on the battlefield.

“I have no doubt that we will continue to rely on [special operations forces] heavily in the future but there is a temptation, and we’ve seen it in other nations, to use [those] forces for everything,” House Armed Services Committee Chairman Rep. Mac Thornberry said during a Jan. 13 speech in Washington.

The Texas Republican likened overuse of special operations to  “taking a sharp knife and raking it across the concrete.”

“You keep doing that and it’s not so sharp anymore,” he said.