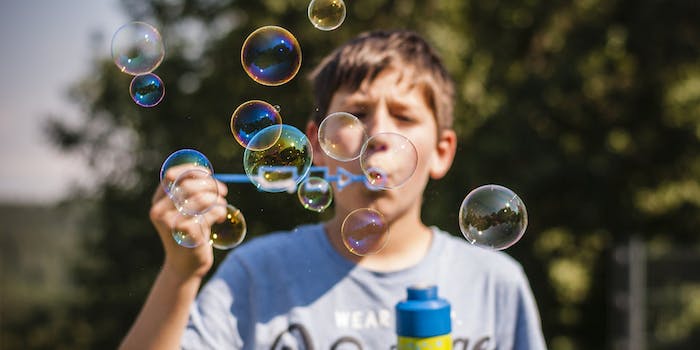 The Internet is a 12-year-old boy

Would you pretend to blow up your son for the clicks?

One April Fools’ Day, we made some homemade popsicles out of pickle juice and gave one to my dad, telling him it was apple flavored. We laughed uproariously as his face puckered on first lick. These are my kinds of pranks: ultimately harmless but inducing a momentary discomfort in the lives of others. And then there are the types of pranks pulled by YouTube star Roman Atwood, who recently tricked his girlfriend into thinking their three-year-old son has just been blown up in an ATV accident.

Atwood lured his girlfriend to a field under the pretense of test-driving a used ATV, then rigged the ATV with a remote control and swapped out a dummy for their son, sending the dummy-driven ATV off a ramp to explode in a fiery crash. Atwood’s girlfriend looked on, believing her son was on the runaway ATV. When Atwood’s girlfriend realizes she’s been punked, she repeats: “That is not funny.” As she runs to hug her fortunately unexploded son, Atwood answers, “It’s kind of funny.” All of it was caught on video and carefully edited with happy-go-lucky music for mass consumption.

Such stunts are becoming increasingly common on YouTube, and the problem with these types of pranks is that they cause the victim to experience actual trauma that can’t be undone. The pain and psychological harm inflicted is very real. Why would someone put someone they love through that—and then put it on the Internet for everyone to see? It’s because the Internet is a 12-year-old adolescent boy with way too much time on his hands.

It’s evident in nearly all corners: from the playground-level debates taking place in the comments section on articles to the juvenile bullying witnessed during last year’s Gamergate scandal—in which women were harassed by male gamers for speaking up about sexism and lack of diversity in the video game industry. There’s something about the Internet that causes the best of us to regress to adolescence, thriving on instant gratification and liberatory insanity. As we consume and share endless videos of rubber bands exploding watermelons or people choking on cinnamon, the relative anonymity of the Web allows the id to take over.

Thus, it’s not just about whether the Web allows people to broadcast their own broish, infantile behavior but the fact that the medium itself encourages us all to do the same. Even the most well-intentioned among us who try to use the Internet for good have a hard time pulling Internet behavior out of the juvenile mire.

In a 2012 report on adolescent behavioral psychology from the National Institutes of Health, B. Bradford Brown highlighted four so-called “psychosocial tasks” the adolescent hopes to accomplish: 1) “to stand out—to develop an identity and pursue autonomy,” 2) “to fit in—to find comfortable affiliations and gain acceptance from peers,” 3) “to measure up—to develop competence and find ways to achieve,” and 4) ”to take hold—to make commitments to particular goals, activities, and beliefs.”

These tasks seem eerily familiar to anyone who has spent a good deal of time on the Internet crawling through others’ attempts to develop a personal brand (standing out), take part in memes (fitting in), accumulate the most followers and faves (measuring up), and repost and retweet lofty quotations reaffirming their beliefs in causes, religions, and controversial topics (taking hold).

There’s something about the Internet that causes the best of us to regress to adolescence, thriving on instant gratification and liberatory insanity.

According to Brown, taking risks—like Jackass-style pranks we might see on YouTube—is a crucial part of helping adolescents develop their identity. Putting yourself out there in often outlandish ways—taking risks and making mistakes in public—is part of growing up and learning about yourself. And teenagers are drawn to that: They are more likely to accept the riskiness of a situation because it is an opportunity for growth, whereas adults with more fully-formed brains, are resistant to risk; since their brains are developed, they have less investment in learning or growing.

And like the adolescent brain, the Internet itself is still struggling with its identity. As issues such as privacy and consent become hot topics, Web users are debating what risks are beneficial to its development and which are dangerous, and social media platforms, websites, smartphone companies, and users themselves must work together to build a better Internet experience. What does the Web want to be when it grows up?

That’s still an open question, and the problem with answering it is that Brown’s first task—to stand out—is becoming the most important goal of Internet users, the reason behind the escalating cruelty of Internet pranks. In order to stand out among the hundreds and thousands of videos appearing on YouTube and Vine every day, users must do something truly extraordinary. If there’s an old saying that there’s no reward without risk, this is especially true on social media.

In Roman Atwood’s case, that risk was the trauma inflicted upon his girlfriend and the reward was 10 million hits, as well as a monetary kickback from the site itself for driving traffic. On the Internet, being a social media sociopath is highly lucrative.

Those rewards are why some are willing to violate the privacy of themselves and those closest to them—vloggers like Sam Rader, who posted his wife’s unwitting pregnancy announcement and subsequent miscarriage to YouTube, or Carter Reynolds, who posted a video in which he is seen pressuring his girlfriend to perform oral sex on him—although that may have been unintentional.

A fully developed adult brain would process these moments as private and unsuitable for mass consumption. However, the Internet brain has determined that they are akin to adolescent teachable moments—even if the posters themselves might not yet be sure what we can learn from them or take away. What can be experienced through someone else’s trauma? How does it make us stand out, fit in, measure up, and take hold?

The decision-making process is supposed to change as we become adults, as we grow out of youthful systems of risk and reward. But unfortunately, real-life behavior is constantly being filtered through a computer or iPhone screen, meaning that the Internet is prolonging our adolescence—as well as its own. While a real-life 12-year-old just has to wait for the end of high school, the trials of college, and the struggles of post-collegiate life to finally mature, the Internet’s development will be arrested for as long as we cling to our worst habits.

Taking risks is important—but so is understanding of consequences of one’s actions.

Zan McQuade is a writer, editor, translator, photographer, and baseball enthusiast living in Cincinnati, Ohio. She is the editor of the Cincinnati Anthology and writes essays for Belt Mag. You can email her at [email protected]