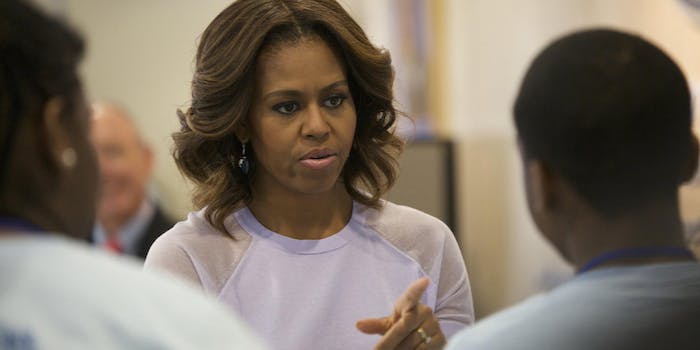 U.S. Department of Education/Flickr (CC BY 2.0)

For black people, having ‘resting b*tch face’ can be a matter of life and death

Here's what it's like to have RBF as a black person.

Looks like the Grey Lady finally figured out what it means to have “resting bitch face.” Years after gut-busting parodies and heartfelt accounts from women chronicled the phenomenon otherwise known as RBF, a New York Times report revived an already spirited debate about the policing of women’s facial expressions.

RBF, as the Times’ Jessica Bennett noted, has been publicly read on the faces of celebrities such as Anna Kendrick, Victoria Beckham, Kristen Stewart, and Mad Men actress January Jones, all of whom are white women. And in addition to noting that smizing enthusiast Tyra Banks has been “caught in serious repose,” Bennett named one other person subject to so-called male RBF: Kanye West.

Although Banks and West are of two different genders, they have one thing in common: They’re black. And in the entire report, they’re the only black celebrities noted to have been spotted with RBF. The social norms around policing others’ facial expressions indeed does have a gendered element, yet there’s also a need to expand this conversation—because mainstream notions of RBF also feed into unfortunate (and often harmful) racial biases.

If you're black and have resting bitch face. It makes white coworkers so uncomfortable. Annoying. https://t.co/J5t7NQNdz5

I'm not an angry black, I just have a resting bitch face

For the RBF-uninitiated, the facial expression of the average man is seen as a marker of their mood, rather than a comment on who they are as a person. Unfortunately, most women don’t get the same benefit of the doubt—whether it’s from men in the workplace or while being approached by strangers during their work commutes. “You should smile more,” these passersby often say, without respecting the need for women to be honest about their feelings. Instead of affirming women’s feelings, some men write RBF “sufferers” off as “bitches” who just need to cheer up and be peppy. But that’s just not how human emotions work.

As Daily Dot contributor Miri Mogilesvky wrote on her personal blog, “some of these responses are passive-aggressive attempts to chastise me for not doing my womanly duty to keep everyone around me happy at all times. Others are genuine attempts to understand me, or genuine concern that I might be in a bad mood.” Mogilevsky continued, “What they all have in common, though, is the shared assumption that underlies them—that there is something ‘wrong’ with my facial expression and that this fact is anybody’s business but mine.”

All too often, though, the commentary veers from “Is there any way I can be of help or comfort?” to “I think your facial expression means you’re a bitch.” It’s a reminder that women are how others perceive them. For the numerous white women highlighted in the Times article, the negative traits associated with RBF are based on gender stereotypes, which police women and their facial expressions for not making men comfortable. For black people, a facial expression can be seen as not only “bitchy,” but also interpreted as a judgment—to quote Dr. King—based on the color of their skin, rather than the content of their character.

In noting Kanye West’s “male RBF,” Bennett may very well be on to something when she notes this “less chronicled” category. It hasn’t been deeply examined for a reason: because men are usually the people pointing out how other women around them have “bitchy” faces.

However, if a black man’s face could be said to have a case of RBF, it’s usually premised on the age-old trope of the “angry black man.” And as this criticism has been levied against black women such as Scandal producer Shonda Rhimes and Nicki Minaj, how we perceive black women expressing themselves tends to be subject to racial bias. As Michelle Obama noted in a May commencement speech at Tuskegee University, it even gets to the First Lady: “[T]he first time I was on a magazine cover, it was a cartoon drawing of me with a huge Afro and machine gun. … [I]t was satire, but if I’m really being honest, it knocked me back a bit.”

Women are often policed for having a “bitchy” face, but it’s an even bigger problem when it’s not just about just gender but also a matter of racial prejudice. When black folks exhibit a nonplussed facial expression—even as a default—it’s sometimes interpreted as anger or bitterness.

And that perception can have profound—and often deadly—effects. According to a report about implicit bias research from the Kirwan Institute at the Ohio State University, a 2003 study found that whites with relatively high levels of implicit bias perceived black people to be more threatening than white people. What was the basis for such a perceived threat? The facial expressions of black people.

White faces with similar expressions weren’t attached to the same negative value judgments otherwise projected onto black people. As a result, the study highlighted, black people were incorrectly understood as angry, which created a rift in the formation of any kind of familial, working relationship—because black people get implicitly labeled as defiant or untrustworthy.

Instead of affirming women’s feelings, some men RBF “sufferers” off as “bitches” who just need to cheer up and be peppy. But that’s just not how human emotions work.

These implicit biases also inform much of the interactions between white police officers and black people. As I previously wrote regarding Sandra Bland’s traffic stop, which ultimately led to her death while in custody: “When interacting with the police, especially white officers and those with any semblance of anti-black bias or prejudice, black people are one hand motion, head twist, or elevated vocal pitch away from being beaten, arrested, and/or killed. With the anti-black bias of how the justice system operates, black people aren’t afforded the same respect as their white counterparts when they are upset or angry.”

Any perceived anger—and our assumptions about what it says about them—gets tied to a black person’s facial expression, one that’s often used to dehumanize them or deny them empathy. According to officer Darren Wilson, Michael Brown had “the most intense aggressive face.” Wilson continued, “The only way I can describe it, it looks like a demon.” How would George Zimmerman have described Travyon Martin’s facial expression, after explaining to police that Martin looked like he was “up to no good?”

This reading of what constitutes “good” and “bad” appearances is more than about unfortunate stereotypes—it’s a matter of decades of gender bias and racial profiling. For black people, having a face that could be perceived as “bitchy” isn’t just a matter of looking more irritated or upset than you might intend to project. It might also mean the difference between life and death.

Photo via departmentofed/Flickr (CC BY 2.0)