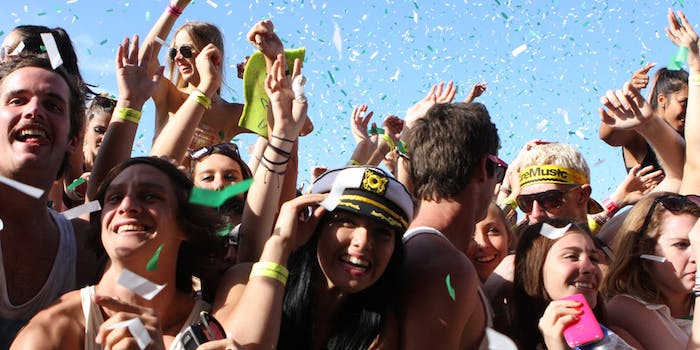 A t-shirt at Coachella caught the Internet's attention, but it's just the tip of the iceberg.

An unnamed Coachella attendee is making headlines online after Jemayel Khawaja, managing editor of Thump, tweeted a photo of him wearing a shirt with what I assume is meant to be a “joke” about rape:

This guy wins the award for worst fashion/lifestyle choices at @coachella. I'm not easy to offend, but this is shitty pic.twitter.com/fyjod24nAx

The shirt, which is presumably a reference to Fatboy Slim’s song, “Eat, Sleep, Rave, Repeat,” is not that unusual. Similar ones have made the rounds online in recent years, prompting retailers to hastily pull them off their shelves.

For example, the SM Store, located in the Philippines, caused a backlash after a customer found a shirt with the slogan “It’s Not Rape, It’s a Snuggle with a Struggle.” Online retailer eBay was criticized for selling shirts saying “I’m Feeling Rapey” and “Sometimes No Means Yes.” Solid Gold Bomb, a clothing company that uses automation to generate t-shirt slogans, sold shirts saying, “Keep Calm and Rape A Lot” on Amazon. Topman sold a shirt that featured a checklist of excuses for domestic violence, such as “You Provoked Me” and “I Was Drunk.” Anti-violence advocates rightfully pointed out that these are actual excuses that abusers use all the time.

Why do these shirts keep being made and sold? The eBay shirts were oh-so-helpfully labeled “offensive cool geeky funny” in the online store, and that provides a clue: Some people like to wear (or make) clothing with “offensive” slogans because they think it identifies them as someone who doesn’t care about others’ opinions of them, which therefore makes them “cool.” However, if anything, filling your closet with these types of shirts marks you as someone who desperately wants to seem “cool” more than anything else.

As for “geeky,” I don’t know where that comes from, except maybe a cynical assumption on the part of the shirt’s designer that geeky people would want to wear such a thing. And “funny?” Well, given how many comedians are still trying to use rape as a punchline, it’s obvious that people still find it funny.

Sexual assault can be funny, in a certain context, when joked about by certain people. But jokes about rape that work tend to make fun of rapists or people who engage in rape apologetics, not actual or potential victims. The “joke” in the Coachella guy’s shirt, if there even is one, is “I find raping people as necessary for my continued survival as sleeping and eating.”

People like to ask why it’s OK to joke about dead babies but not about rape. I have difficulty believing that someone could really be so socially clueless as to ask this question in good faith, but assuming they are, it’s like this: the prevalence of infant mortality is considerably lower in this country than the prevalence of sexual assault. Babies that do die usually die because of some sort of accident or health issue, not because there are people out there deliberately murdering babies in order to terrorize them (or their parents).

The “joke” in the Coachella guy’s shirt, if there even is one, is “I find raping people as necessary for my continued survival as sleeping and eating.”

It’s a terrible tragedy when any human being dies, for any reason and at any age, but for most of us, it’s not a tragedy inflicted on us by other people in order to control and disempower us. That’s what rape is.

A shirt with a joke about dead babies is pretty pointless and tasteless, in my opinion, but it’s not the same as joking about an act of violence used to terrorize and marginalize certain groups of people. And I bet that if one of these edgy types wore a shirt with a dead babies joke and was confronted by an upset parent who had lost an infant, the wearer would probably apologize rather than arguing back with something like, “Come on, it’s just a joke! Get a sense of humor!”

However, that’s the response that people who challenge rape jokes usually get. “It’s just a joke.” It’s just something we live our lives in fear of.

People who think that rape is funny—and who would cheerfully wear a t-shirt announcing that—probably think that sexual assault is akin to a natural disaster or accident, like a falling tree or a lightning strike. We can make jokes about a guy being struck by lightning because it’s quite rare and because there was no malice in it. But rape is quite common—and it happens on purpose.

These shirts getting sold is another thing that happens on purpose, but the companies that sell them make a concerted effort to hide that fact. After pulling its “It’s Not Rape, It’s a Snuggle with a Struggle” shirts, SM clarified that they find the shirt “unacceptable” and explained that “we are investigating why [the shirt] was included in our delivery of assorted t-shirts.” They did not explain who decided to actually put them on the shelves—or why.

These shirts getting sold is another thing that happens on purpose, but the companies that sell them make a concerted effort to hide that fact.

Similarly, eBay removed the listings for its rape shirts, explaining that such content violates their guidelines and that the shirts had had “slipped through the net.” Again, no explanation for how the shirts had wound up on the site despite the site’s guidelines.

Solid Gold Bomb, meanwhile, used an automated process to design its shirts, and even though there was theoretically a procedure in place to screen them before printing, apparently the “Keep Calm and Rape A Lot” shirt, too, slipped through the cracks.

How is it that all these shirts just end up on store shelves (or stocked in online stores) through no apparent action or effort on anyone’s part? Maybe it’s because rape jokes on shirts just don’t raise red flags for most people—at least not until the Internet gets angry about it. Maybe none of the dozens or hundreds of people who saw those shirts thought, “Wow, this is really creepy and messed up,” and that’s how they ended up getting sold.

That mental process is eerily similar to the one that many people go through when rape actually happens: They either ignore the news stories or the rumors, or they think, “Well, that’s just what happens, I guess,” and they move on. While these bystanders are not to blame for rape in the same way that rapists are, rapists count on these people to exist. They count on the majority of people shrugging their shoulders and believing rape to be someone else’s problem.

The fact that t-shirts like these now cause substantial pushback online is a powerful testament to the fact that anti-rape activism is working. However, for meaningful, lasting change to happen, people have to start noticing things like rape jokes on their store’s t-shirts, without hashtag campaigns to force them to pay attention.