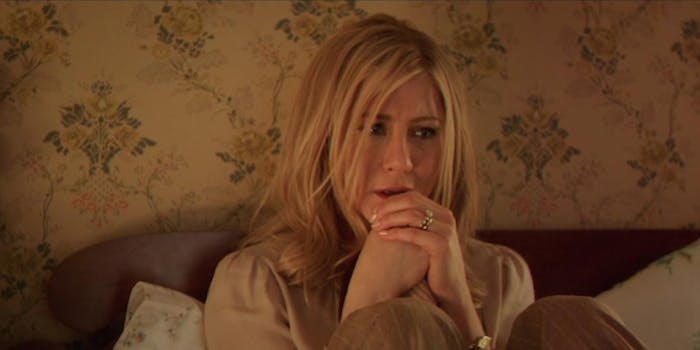 The Internet may be very concerned about whether or not Jennifer Aniston is planning on having children, but she’s not.

The Internet—and universe at large—may be very concerned about whether or not Jennifer Aniston is planning on having children, but she’s not. In an interview on Today this past week, Aniston opened up about constantly being asked about kids. She said:

I don’t have this sort of checklist of things that have to be done, and…if they’re not checked, then I’ve failed some part of my feminism or my being a woman or my worth and my value as a woman because I haven’t birthed a child….I’ve birthed a lot of things, and I feel like I’ve mothered many things….And I don’t feel like it’s fair to put that pressure on people.

How can I be expected to get on with my day when childless women like Jennifer Aniston are just running around all purpose-driven & happy??

I could tell Jennifer Aniston another thing, I’d tell her I’m the only living human who doesn’t care about her childless womb/spinsterhood.

The latter is true for some women, but if we say it directly, we just open ourselves up to more questions. “Why not?” “How could a woman not want children?” “But what will your husband say?” “So what are you going to do with your life?” “Why are you so selfish?”

But those who do want children and say so must then reveal either intimate details about their sex lives (“We’re trying”) or other personal information that they shouldn’t feel obligated to disclose (“I can’t conceive” or “My finances aren’t really conducive to that right now”).

It’s not surprising, then, that celebrity women often have to tiptoe around this question. For instance, Aniston didn’t say in her interview whether or not she wants children or wished she’d had them.

What she did say, though, cleverly subverted the intent of the original question while framing it as unfair to ask. Aniston noted that she hasn’t “failed” at being a woman by not having children and that she’s created many other things—perhaps instead of having children. And while the trope of the woman who compensates for not having children by putting everything into her career is pervasive and negative, it’s important to note that different things are fulfilling for different people. From her wording, it’s clear that the things Aniston has spent her life doing have been meaningful.

It’s interesting, too, that Aniston also specifically mentioned she hasn’t “failed some part of my feminism” by not having children. Usually, the trope goes the other way around: It’s the women who choose to have children who are somehow “failing” feminism. (Of course, that’s completely wrong; feminism as an ideology is agnostic on whether or not women should have children, because it stands for everyone’s right to make their own choices.)

It’s possible that Aniston misspoke and meant to say “femininity,” but it’s also possible that she’s making a larger statement about her personal choices and how they shouldn’t determine whether or not she can be considered a feminist—or a woman.

The fact that many people don’t seem to believe that it’s possible to be a “real woman” and not want children has consequences beyond just irritating and frustrating those of us who are tired of being asked about our childbearing plans.

For example, women who pursue sterilization for medical or personal reasons may face condescending, patronizing doctors who refuse to perform the procedure they have asked for. Why? Because the doctors think they know better. Bri Seeley, who identifies as childfree, writes for The Huffington Post:

At the age of 24 I began to ask my doctors if I could be sterilized. Year after year at my annual exam I would state my case—each year unchanged from the previous year. At each visit, my physician told me that I was too young, what if I changed my mind? But the reality was that I didn’t change my mind. In fact, my desire to not have children grew and grew with each passing visit.

It took Seeley years to obtain the procedure she should have been given the first time she asked for it.

Pressuring women into having children—and, yes, haranguing them about when it’s going to happen is a form of pressuring—also seems like a really bad idea. Having children should be something you do because you want to, not to get everyone around you to shut up about it already. The Daily Dot’s s.e. smith, who faces this pressure despite deciding to remain childfree, writes, “Would all of these people pressuring me to have a child like me to have one and then be a terrible parent? Is that what they want?”

Finally, treating childbearing as the be-all end-all of womanhood feeds into a lot of bigoted and faulty thinking. The fact that lesbians and trans women may not be able to have children “naturally” is often used as an excuse to delegitimize their identities and relationships, and the apparent inability of pro-life advocates to accept that women want to have sex for reasons other than procreation contributes to ongoing threats to reproductive rights.

It’s long past time for celebrity interviewers and concerned family members alike to understand that women are not defined by their ability or willingness to have children—and that badgering them about it their whole lives long is rude and regressive.

Photo via Life of Crime/Trailer