If someone accuses you of violating a dead pig, here’s why you shouldn’t deny it

In 2004, a year before he took his own life, the godfather of Gonzo, Hunter S. Thompson, published an anecdote David Cameron would do well to read. According to the likely apocryphal story, Lyndon Johnson was once down in the polls in his 1948 Senate race, widely believed to be a low point for corruption in American politics. Desperate to close the gap, Johnson suggested leaking a rumor that his opponent, formerly a pig farmer, had been copulating with his livestock.

According to Thompson, the campaign manager replied that they couldn’t do that—because it wasn’t true. “Of course it’s not!” Johnson supposedly shot back. “But let’s make the bastard deny it!”

Lord Michael Ashcroft was clearly taking note of this tactic. In of a new unauthorized biography of the PM, the Conservative Party co-chair and fundraiser alleges that during his youthful days at Oxford, a young David Cameron had once stuck his genitalia (what Time magazine has diplomatically called “his non-parliamentary member”) in the mouth of a dead pig—as part of an initiation ritual into a secret society.

As news about the allegation spreads across social media—dubbed #Piggate—Cameron finds himself in a dilemma. If he ignores the libelous claim, it makes him look guilty—like he has something to hide. But if he, like the pig farmer in Thompson’s story, denies the claim outright, Cameron only stands to fan the flames of the rumor. By acknowledging the absurdity, he only makes the situation worse.

That "NOW" is shocking news to existing customers. #piggate pic.twitter.com/dNDUhTIJHv

His counterpart across the Atlantic is quite familiar with such predicaments. President Obama has been dogged by rumors about his faith and birthplace as long as he’s been a public figure. As far back as 2007, Fox News was alleging that Obama matriculated in “a radical Muslim madrasa.” And during the 2008 elections, rumors spread across the Internet that Barack Obama was born in Kenya, not Hawaii—epitomized by an anonymous, infamous email asking: “Who Is Barack Obama?”

In response, the Obama campaign famously created a page on his website called “Fight The Smears”—featuring a scan of the president’s birth certificate. 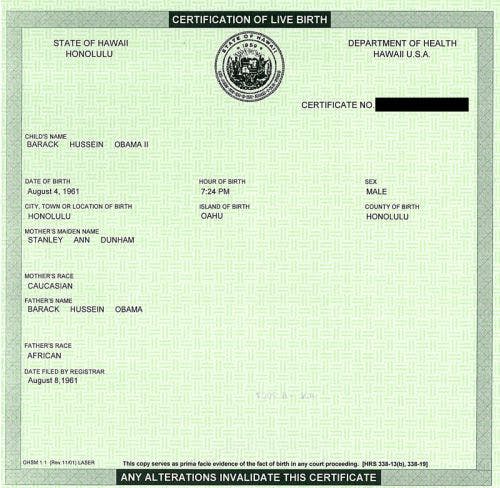 Screengrab via Fight the Smears

What the Obama campaign failed to realize—and what David Cameron should learn—is the fact that those who want to believe untrue things about sometime are going to do so in the face of all evidence. The release of the birth certificate did nothing to assuage rumors of Obama’s birthplace and, in fact, likely made them worse. Polling conducted a year Fight the Smears launched found that 24 percent of Americans and 58 percent of Republicans doubted Barack Obama was born in the U.S.

“Of course it’s not!” Johnson supposedly shot back. “But let’s make the bastard deny it!”

The controversy came up again in 2011 when Donald Trump, now the GOP frontrunner, took up birtherism as his latest cause—prompting the president to release his “long-form” birth certificate. A year after the release—which was largely assumed to have settled the issue—61 percent of Republican voters still thought Obama was lying about his birthplace. Today, as Trump and Dr. Ben Carson, who is currently third in the Republican presidential race, find themselves embroiled in a controversy over the questioning the president’s faith, 44 percent of Republicans are certain Obama was born elsewhere. Twenty-six percent say they’re uncertain.

This is an eight-year old controversy over a provable, documented fact. And with each new piece of evidence provided by Obama, his critics found more and more to question. His long-form certificate had some “embedded layers in the document.” Perhaps, as some conspiracy theorists suggested, this was evidence of tampering or forgery?

To this day, birthers like Larry Klayman and Orly Taitz point to Donald Trump’s candidacy as evidence they are not a fringe movement. Taitz told the Daily Beast, “If and when Trump is elected, his Attorney General is not going to be a personal friend of Barack Obama, and he will abide by his oath of office to seek truth and justice and uphold the law, and I believe that we will have the answers because all of the evidence clearly shows that [Obama] is using fabricated IDs.”

While no one knows that the theories would have died out without the Obama campaign’s responses, it’s clear that releasing his birth certificate did not help to kill the rumor. Responding to claims you know to be false by denying them only helps create an actual discussion out of unfounded speculation. David Cameron can’t release a government certificate verifying he did not stick himself into a pig, but he could do as much damage to himself if he ever responds to the allegations.

And with each new piece of evidence provided by Obama, his critics found more and more to question.

In effect, Cameron must abide by a mantra every Internet user should take to heart: Don’t not feed the trolls. Like the British press, online trolls are seeking attention through attacks that are often baseless, carefully crafted to generate a response from their intended target. Because we—through our access to social media—are all public figures, everyone is now faced with the ability to have their reputation ruined by digital pranksters. Although the initial instinct might be to respond in full force—buoyed by the false belief it will end the attacks—we shouldn’t be surprised when online harassers, now validated and engaged, up their ante.

Consider it analogous to the “Streisand Effect,” a social phenomenon in which the act of keeping something a secret actually has the opposite effect. Filing a suit to make sure nude photos of yourself don’t appear online, for example, is assuredly the quickest way to make the photos’ existence widely known. Actor James Woods is finding this out for himself. The star filed a $10 million libel suit against an anonymous Twitter user who quipped about the actor using drugs, thereby attracting more attention to the allegation and cementing its association with his public image.

The British tabloids may do this job for Cameron, gleefully keeping this story alive as long as it will sell papers. Eventually, however, public interest will fade—and more pressing issues will grab the media’s attention. Pig jokes may haunt David Cameron for the rest of his career, but as long as he doesn’t give everyone laughing at him more ammunition, jokes is all they will ever be.

Photo via photommo/Flickr (CC BY ND 2.0)