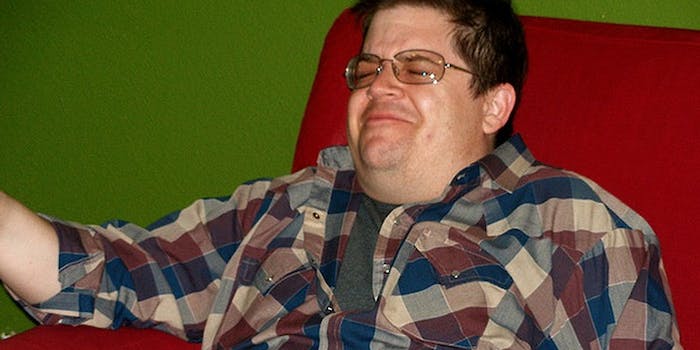 Why I unfollowed Patton Oswalt—and why you should too

How a great comedian turned into a sad heckler.

Patton Oswalt was one of the very first people I followed on Twitter. I’d admired his dexterous standup comedy for years, from an HBO special to his set for Comedy Central Presents and up through a series of mid-aughts albums that my wife and I just could not get enough of. Even when it felt as though he’d begun to pander to a smug, know-it-all fanbase, we didn’t really mind.

But things are different on Twitter, where Oswalt commands the attention of 1.7 million fans—and, by extension, the entire social network. Comedians are famously peevish about the expectation that they’ll always be “on,” and yet it has to be said: On the Web, like many of his established comic peers, he’s just not very funny.

“If you strike me down, my @instagram account will receive more follows than you can ever imagine.” #SponsoredStarWarsVII

Well, fine. I’m not bothered if a smart entertainer wants to blow off steam by throwing out some silly nerd hashtags and breathlessly livetweeting NBC’s Hannibal—the flashes of inspired cynicism and occasional joke-in-the-making were all I needed. Plus, his kid is adorably morbid:

“Even the dark is scared of the dark.” — Things my daughter says that would make excellent post-punk lyrics

What I really couldn’t stomach, though, was Oswalt’s almost pathological need to confuse and belittle that ubiquitous Internet specimen, the Easily Outraged Commenter. The premise of his Twitter experiments is always the same: use the platform in such a way that people who are in on the gag can congratulate themselves on their literacy while everyone else gets offended.

These idiots who deny that clumsy change is real, and a pressing threat are no different from misogynists who claim that

Women enjoy rape. Grow the fuck up, all of you.

Even when Oswalt is making a dick joke onstage, it’s delivered with a maturity that the best of his trolling lacks. Here, he’s just trying to make the antisocial kids in the back row of a high school assembly crack up right when they shouldn’t. Now he’s successfully ginned up more controversy by obliquely apologizing for unacceptable statements he never actually tweeted.

The FUCK is wrong with me? Last Tweet deleted. The victims of the Holocaust deserve our highest respect, not penis limericks.

The problem—as with the racial punchline that ignited his war with Salon last year—is that even the people who recognize the performance are annoyed. And is there anything remotely amusing about watching a guy using his considerable talents to simultaneously mock the stupid and needle the allegedly “humorless” online? Far be it from me to judge how anyone spends their free time, but as a spectator sport, shooting fish in a barrel leaves a lot to be desired.

.@EricBoisen Yes. They’re from the “Lewis Carroll” level of Twitter.

@jitka and how he’s convinced the people are mad don’t get that he didn’t actually delete tweets. they get it

One of Oswalt’s finest moments is captured on the 2007 album Werewolves and Lollipops. In the middle of an intensely quiet setup, some drunk audience member lets fly a “Woo!” that completely derails his carefully honed momentum. Oswalt then takes a long, lovely detour in order to carpet-bomb his heckler with a combination of linguistic verve and unalloyed malice. “You’re gonna miss everything cool and die angry,” he concludes at one point.

This would appear to be his opinion of the great majority of the Internet’s population as well: Those legions of dolts who just don’t “get it”—except there’s nothing too timely about that observation, and little to be gained in recycling it on a regular basis. Whether or not he’s leading a crusade against vacuous political correctness and manufactured scandals, he’s come to resemble an irritating heckler himself, playing perilously close to a type he’d ordinarily skewer.

In the end, it may just be a matter of medium. What makes Oswalt’s comedy sly, surreal, and subversive “in real life” makes it a lightning rod for denunciation on Twitter. I can understand, if just barely, why he might get a kick out of that—but not why anyone else would.