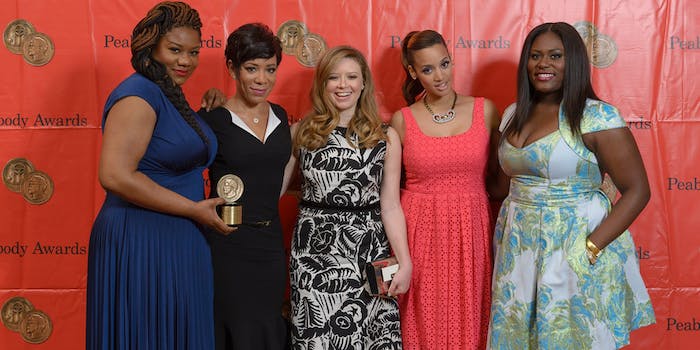 The future of queer television is on the Internet.

“This set is a dyke bar, all it needs is a pool table and D.J. spinning ‘We Are Family,’” quipped Orange Is the New Black actress Lea Delaria in an Advocate interview about Netflix’s breakout hit. Although Delaria is obviously joking, she also saying what viewers already know: Orange Is the New Black is the queerest thing on TV today. In fact, during OITNB’s second season, the number of lesbian plotlines becomes a running joke. Single on Valentine’s Day, the avowedly heterosexual Maritza and Flaca decide to engage in a same-sex lip lock, if to coyly acknowledge the show’s dearth of lesbian schtupping. (They decide lady love is not for them.)

For those tuning into the L Word aspects of the show, there’s much to enjoy (including a hilarious contest between Nicky and Boo to see who can bag the most Litchfield ladies) in a medium that’s long been a home for queer-themed content. At a time when cable is taking baby steps toward inclusion on shows like Looking and Faking It, web programming has long been unabashedly and proudly queer. Whereas television is still chained to Jack MacFarland sidekicks, Billy Eichner found viral success by upending what we think about flamboyancy. On the Internet, he’s not anyone’s Sassy Gay Friend. Eichner is the star of the show.

By putting queer lives at the center of the frame, LGBT-themed Web shows like Kam Kardashian, Hunting Season, and The Outs run the spectrum of representation. Wenjo Carlton’s Easy Abby is more of a traditional lesbian rom-com, while the Ryan Logan-directed Kam Kardashian acts as a madcap screwball comedy, Bringing Up Baby as imagined through the lens of reality TV. Although The Outs (a seven-episode Brooklyn-set series) was often compared to Girls, its neurotic brand of honesty was all its own. Interview Magazine called it “the most accurate and essentially human portrayal of young gay men today.”

According to a profile in The Atlantic, The Outs was “born out of a dissatisfaction with mainstream television,” where LGBT representation “[tends] to all look similar.” Sitcoms like Happy Endings, Modern Family, and Partners are settling for inclusion (because, hey, it’s screentime), but there’s a prevailing feeling that television can be doing more. In order to survive on network TV, characters like Mitchell and Cam have had to act less like a loving gay couple than “asexual frenemies two squabbles away from a murder-suicide,” as the A.V. Club’s Joshua Alston put it.

Although lesbian relationships took place at the fringes of Piper Kerman’s novel, which provided inspiration for the series, they’ve been front and center throughout the show. In real life, Piper and Larry may have worked out their problems, but TV Piper (Taylor Schilling) is far more fixated on Alex Vause, her femme fatale lover, played with cat-eyed relish by Laura Prepon. The couple proved so popular during the first season (even spawning their own Tumblr-sanctioned portmanteau) that OITNB brought Alex back for a third season. This was despite the fact that the real-life character was barely in the book at all.

It’s hard to imagine same-sex romance as passionate and intimate as Pipex on ABC or even HBO—which has been more interested recently in watching women get raped or murdered than seeing them enjoy consensual, fulfilling romance. Whereas cable’s Golden Age of Television (exemplified by the male-dominated Breaking Bad and Mad Men) have largely left women behind, as Chris Osterndorf points out in an essay for The Daily Dot, Orange Is the New Black’s vibrant, diverse female cast is its flaxen soul.

What makes Orange Is the New Black truly progressive, however, is how its content expands the definition of the word “queer.” Whereas the word has become a reclaimed term to signify the endless alphabet of identities under the LGBT umbrella, OITNB’s diversity extends not just to its groundbreaking Sapphic and transgender inclusion. Orange Is the New Black focuses on the stories of all of those who live at the margins, whether by dint of their sexual orientation, gender identity, or cultural dislocation. The ladies of Litchfield share not just bunks but the shared experiences of marginalization, looking at sexuality through a wider lens of socioeconomic desire.

LGBT-themed TV shows have, even at their best, long struggled with transcending the fact of their sexuality. If you took away the rumpy-pumpy from Queer as Folk or Looking, what exactly do you have left? Queer as Folk was rarely about anything other than its characters’ own narcissistic social myopia; outside of the political aspect of representing gay men’s lives on film, QAF had little to say. As well-written as Looking is, one has to wonder: If Patrick wasn’t queer, would viewers even care about his story at all? Otherwise he’s just a boring guy with good hair.

However, what has made Orange Is the New Black such a cultural phenomenon is how universal its struggles feel. It’s not just about a bunch of women in prison; it’s about all of us. In the aforementioned Atlantic profile on The Outs, sex columnist Dan Savage argued that the kinds of characters with whom we can identify is changing. “We can experience catharsis through a straight couple’s story,” Savage said. “But straight people didn’t used to be able to do that with gay roles. The gulf was too great. Straight people couldn’t relate to gay people and their experience… Now I think that is changing.”

Savage is right, primarily because shows like Orange Is the New Black have challenged viewers with the complexity of queer experiences, ones that intersect with the prison-industrial complex, mental illness, health care, the American class system, and the drug trade. People used to wonder whether audiences would be put off by same-sex content, but in becoming Netflix’s most-watched original series, OITNB showed that audiences demand it.

Photo via Peabody Award/Flickr (CC BY 2.0)