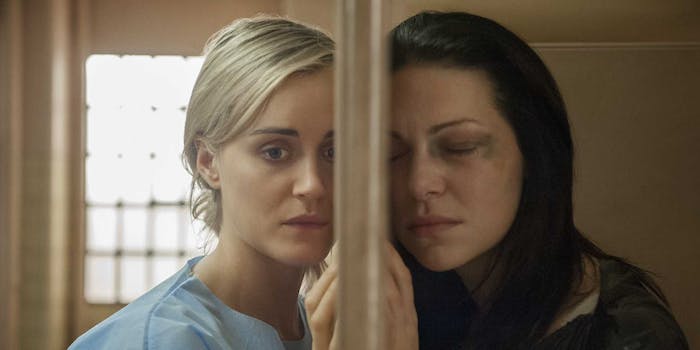 When did Piper and Alex become so boring?

This article features minor spoilers about the second and third seasons of Orange Is the New Black.

Orange is The New Black is back and so is its most hated character.

No, we’re not talking about its most diabolical character—that would probably be the deceased Vee—or the character with the most problematic views towards women, which is a toss-up between Healy and Pornstache. And since he’s no longer on the show, we’re not even talking about Larry. Ironically, OITNB’s most hated character is also its former lead: Piper Chapman.

It doesn’t hurt that with many of the aforementioned characters gone, Piper now has less competition for this title. But her neurotic, self-absorbed personality has never made her a fan favorite. Yet in the series’ recently released third season, it’s not Piper’s selfish antics, entitled choices, or general whininess that make her so hateable—at least not on their own. What makes Piper the least likable character in the latest season is how those qualities manifest in her relationship with her on-again/off-again girlfriend, Alex Vause. In fact, Piper and Alex’s relationship is not only annoying, it’s the single worst aspect of the third season.

Piper has always been the face of white privilege on Orange. Show creator Jenji Kohan has freely admitted that she used Piper as a kind of “trojan horse” to tell stories about women of more diverse backgrounds—as a way into Litchfield Prison, without making her what the show is actually about. Played by Taylor Schilling, who has always done a good job with a frequently frustrating character, the role of Piper as the whitest of white people at least used to have some significance to Kohan’s larger message.

For instance, after being granted furlough to see her dying grandmother in Season 2, she gives a pretty great monologue about how, even if she’s benefiting from white privilege, her feelings and experiences are not invalid. Crazy Eyes, née Suzanne, appropriately reacts by throwing a piece of cake at her.

Because even if Piper is not wrong, technically, her indignance feels like a slap in the face to the rest of the women in prison with her. It’s a moment where the show addresses some of its biggest criticisms, while also acknowledging why those criticisms make sense. This is Piper’s primary role on the show: to remind its privileged viewers, particularly the white ones, that this is not their world. They may be able to empathize with many characters in Litchfield, but unlike viewers who have finally seen themselves reflected in this television program, they don’t really understand.

This is Piper’s primary role on the show: to remind its privileged viewers, particularly the white ones, that this is not their world.

“Seven episodes into OITNB, I can’t say that I find Piper particularly relatable,” wrote Tope Fadiran Charlton at RH Reality Check after the show debuted in 2013. “But I do find her and many of OITNB’s characters recognizable—especially their intra- and interracial interactions around the nexus of race, gender, and class.” Flash-forward to June, 2015, when the news media is dominated with stories about Rachel Dolezal, and we’re once again reminded why OITNB needs to tell stories about people who just don’t get how white privilege works.

The character of Alex Vause, on the other hand, has never demonstrated the narcissistic lack of awareness that makes Piper such a difficult character. Sure, she’s self-involved, but that narcissism is less rooted in privilege. This is why she hasn’t drawn ire from fans the same way Piper has. Portrayed somewhat stunningly by That ’70s Show’s Laura Prepon, Alex has never felt the need to apologize for who she is. She’s not a “good guy,” but unlike Piper, she feels less need to justify her terrible decisions.

Asked by TV Guide what it was like to play a villain on the show back in 2013, Prepon told the magazine, “Alex—at the end of the day, yes, she’s a drug dealer, but you see that she’s a vulnerable person and she has really intense feelings and love for this woman. And you start to see that Piper is actually a very manipulative person, and she’s not this cookie-cutter homemaker that everyone thinks she is. … Piper is just as toxic as Alex.”

Or, as interviewer Liz Rafferty puts it, “Alex seems to think of herself as a bad person but maybe she isn’t, whereas Piper is so convinced that she’s a good person and is totally taken aback whenever anyone challenges that.”

There are plenty of fans who’ve spent time obsessing over Piper and Alex’s relationship in the past. However, season 3 of Orange Is the New Black plants that relationship firmly at a crossroads. After Piper briefly disappeared from the show during the beginning of Season 2, the A.V. Club’s Myles McNutt confessed, “I have to say that I like the show better with her in it.” But contrary to popular opinion, he didn’t feel like her relationship with Alex contributed much to the series: “Piper without Alex is just a more interesting figure from my perspective.”

Alex has never felt the need to apologize for who she is. She’s not a “good guy,” but unlike Piper, she feels less need to justify her terrible decisions.

And maybe that’s the problem with Piper and Alex in Season 3: Piper works as a microcosm of white privilege, while Alex functions best as a take-no-prisoners, fiercely unrepentant warrior woman. And in a sense, they work better when they are pining for each other and when their love is forbidden, rather than allowed to blossom. And as is the case when Pam and Jim finally got together in The Office, or Nick and Jess made it official on New Girl, they’re just not as interesting together. Moreover, their relationship is aggressively boring compared to everything else going on in the show.

Worse still, a recent Rolling Stone cover featuring Schilling and Prepon only reinforces the idea that Piper and Alex’s relationship has gone all Caged Heat. Not that there’s anything wrong with “hot” lesbians, but when Orange Is the New Black starts getting sold on the basis of “HOT LESBIAN ACTION!”, you know something is amiss. This is a show that has traditionally used sexuality as an extension of character, not as the defining factor of it.

It seems unlikely that Kohan is truly using Piper and Alex’s relationship for the purpose of pure titillation, and it’s more likely fan service to those who rooted for them to be together during the Larry Era. But when the first part of Season 3 is so much about how they can’t keep their hands off each other, even if they should, it’s not hard to see how this storyline could be misinterpreted. It’s sort of like the widespread heterosexual fetishization of Ruby Rose, the latest addition to Orange’s cast. Yes, Rose may be attractive to virtually anyone of any sexual preference, but if you think she is there to “tempt” straight girls into “going gay,” then you’re missing the point entirely.

As Season 3 of OITNB continues, Piper increasingly becomes a villain a role that works much better for her—while Alex fades into the background. This isn’t ideal, as the show should be able to find a way to equally use both characters as extensions of the greater ensemble. It’s a nice surprise that the current season is less grim than Season 2, which was fascinating but sometimes hard to watch (case in point, the show will be competing at the Emmys as a drama this year). As we emerge from the darkness of last season, the Piper/Alex relationship mars a run of episode that otherwise succeeds in being smart while also having a good time.

They work better when they are pining for each other and when their love is forbidden, rather than allowed to blossom.

That is Orange’s true strength: No character suffers more than they need to, and no one is depicted as a victim. Unfortunately, the Piper/Alex relationship is its own form of suffering, as viewers are forced to hate a relationship they used to love the idea of.

Piper and Alex may never be as fascinating as many of their status quo-bucking inmates, but continuing to mire them in a lesbian soap opera will only stifle the characters’ potential to grow into their own fully realized characters. While fans have long rooted for the show to kill off Piper, Vox’s Todd VanDerWerff recently argued that the character is “vital to the show’s success,” even when the show can’t figure out what to do with her.

While both characters’ futures are up in the air, the best thing OITNB can do next season right off the bat is to let them do their own thing—letting Piper spread her wings as a budding antagonist while Alex deals with life back inside the walls Litchfield. When it comes to Pipex, we’ve been there. We’ve done that. We don’t care anymore.