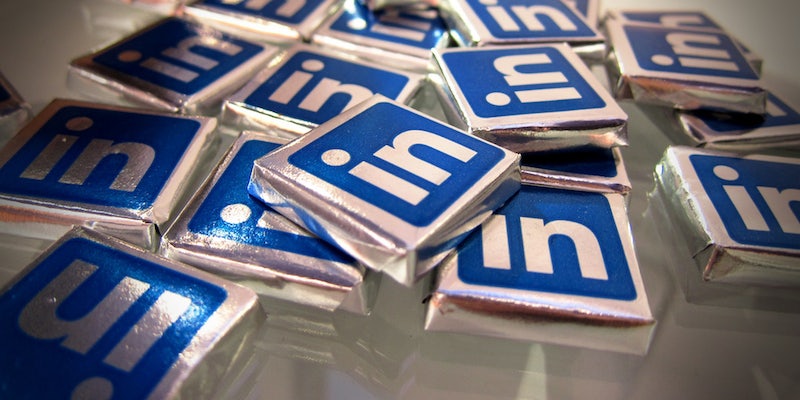 Like the site’s many 364 million other users, Charlotte Proudman joined LinkedIn to network with her colleagues. Facebook’s boring, stuffy counterpart is intended to allow professionals to display their skills and achievements—and that’s about it, really. LinkedIn is a “social network” in the same way that your office Christmas party is a “social function”: Some socializing goes on, but business attire is required and hitting on a colleague is still frowned upon.

It’s understandable, then, that Proudman—a lawyer practicing in London—was annoyed when she received a message from Alexander Carter-Silk, a senior partner in a prominent law firm commenting not on her legal acumen but her physical traits. Recognizing that it’s “probably horrendously politically incorrect” didn’t stop Carter-Silk from commenting on her “stunning” photo: “You definitely win the prize for the best Linked in [sic] picture I have ever seen.”

“I named the solicitor who sent the message because, in my view, the public interest of exposing sexism outweighed any right to privacy here,” Proudman wrote several days later in an op-ed for the Independent. In calling out Carter-Silk, she felt she was holding him accountable for something that women have to deal with on a daily basis. “All too often, women are afraid to speak up about these small but significant comments on their appearance which happen every single day.”

Sexism in the workplace is much bigger than LinkedIn—and far from a new phenomenon. Anita Hill famously raised the issue of sexual harassment way back in 1991. Her former boss, Clarence Thomas, had been nominated to the United States Supreme Court, and Hill spoke out about her own experiences with Thomas, who was then a judge. According to a 1991 New York Times piece, Thomas “frequently asked her out and embarrassed her with lewd conversation when she refused.”

Hill isn’t wrong. Writing for the Daily Dot last year, Elana Carlson spoke of her own experiences with men using LinkedIn less as a networking website and more as a dating app. After meeting a man at a networking event, he quickly connected with her on LinkedIn:

Hey Elana. Thought I’d try to find you on LinkedIn to connect. Sorry I didn’t get a chance to chat longer. Had to rush out to get to another meeting. Would love to grab a coffee or drinks sometime if you’d be up for it.

For Carlson, this quickly turned into a unfortunate game in which she had to figure out if the message was professional or sexual. And for many women on LinkedIn, it’s the latter.

This isn’t a new phenomenon on LinkedIn—or social media as a whole—but women in media serve as a prime example of just how bad this online misogyny can be. As platforms like Twitter continue to grow, it’s becoming increasingly seen as a job requirement for journalists to have an active social media presence. This can be very good for readers who want to provide feedback and interact with their favorite writers, but as I wrote last month, the consequences for female journalists can be ugly.

This quickly turned into a unfortunate game in which she had to figure out if the message was professional or sexual. And for many women on LinkedIn, it’s the latter.

It’s something journalist Laurie Penny has long argued. In a 2013 essay for the Independent, Penny wrote about the torrent of abuse she has faced: “After a while, the emails and tweets and comments containing graphic fantasies of how and where and with what kitchen implements certain pseudonymous people would like to rape you case to be shocking, and become merely a daily or weekly annoyance.”

This is an extreme—yet all too common—example. There is a big difference between calling a woman “stunning” and threatening to rape her into silence, but what unites them is just how savagely ordinary they have become.

According to journalist Laura Bates, these are instances of “everyday sexism.” Bates founded the Everyday Sexism Project, which cites examples of what many would consider small—yet still sexist—slights and comments directed at women throughout society. “The thousands of accounts we have collected which pertain specifically to gender prejudice at work strongly suggest that this is a large part of the problem and one that we need to acknowledge and tackle,” she wrote in a blog for the Huffington Post.

Bates cites a study by the U.K. government showing the pay gap between British men and women at 20 percent, but that doesn’t address further gaps faced by women of color.

In the United States, though, the American Association of University Women used census data to show just how stark this disparity is: White women make 78 percent as much as white men, the highest women earners, while the lowest earners—Hispanic and Latino women—made just 53 percent compared to white men, highlighting the double burden women of color face.

It’s easy to dismiss any correlation between everyday sexism such as that highlighted by Bates or the comments received by Charlotte Proudman. However, in an interview with BBC’s Radio 5, Proudman pointed out the double standard women face: “My partner gets messages asking if he wants a job at hedge funds, I get propositions from men asking me out.”

The Telegraph’s Claire Cohen last week reported that women are changing their LinkedIn photos to something deemed less attractive in an attempt to reduce the number of sexual advances.

There is a big difference between calling a woman “stunning” and threatening to rape her into silence, but what unites them is just how savagely ordinary they have become.

It isn’t the first time; in 2013 LinkedIn attempted to pull an ad for Toptal, a small tech startup, after users complained that “the women used in Toptal’s advertising appeared too glamorous to be ‘real’ engineers.” Some of the pictures used were stock photos, but some were of real engineers working at the company. However, the fact is that many LinkedIn users couldn’t imagine a conventionally attractive woman being a technologically competent professional.

If Alexander Carter-Silk really wanted to compliment Charlotte Proudman, there’s a lot for him to choose from: her impressive education, he columns in national newspapers, her numerous professional awards. Her picture isn’t one of them.