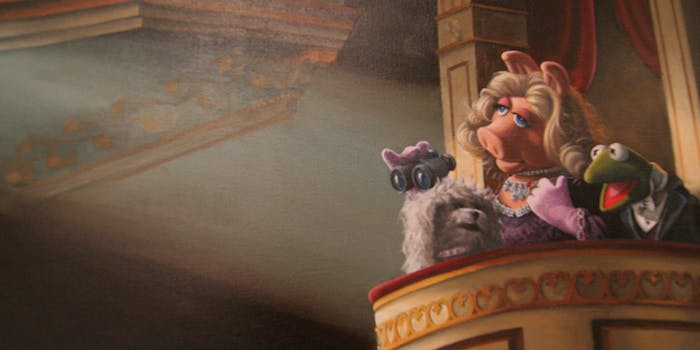 In the weeks leading up to the premiere of their new ABC show The Muppets, the news that Kermit and Miss Piggy had gone their separate ways all but broke the Internet. This has lead to no small amount of reactions—with fans wondering what drives Kermit to forsake his fellow female frogs in favor of interspecies romance and inevitable comparisons the Ben Affleck-Jennifer Garner split, after rumors Affleck cheated with the couple’s nanny.

But inherent in this faux firestorm is the tacit acknowledgement that this separation is temporary. One of the unspoken truths of serial fiction is that change is an illusion and everything returns to the status quo. Superman was never going to stay dead. Bruce Wayne is always going to be Batman. Kermit the Frog and Miss Piggy are always going to go back to dating. Just as when any television show breaks up it’s designated couple, we all expect them to reunite eventually; like Ross and Rachel, the various relationships they get into in the interim are just roadblocks on the path to true love. We’re rooting for the One True Pairing to just quit fighting the inevitable and realize they’re perfect for one another.

The problem is—in the case of Kermit and Miss Piggy—that means we’re rooting for the victim of an abusive relationship to get back together with his abuser.

Miss Piggy is an incredible character—a feminist icon in her own right. At a time when it was hard to find any well-rounded female characters, Piggy stands out as a felt-covered exception. Career driven, phxysically and emotionally strong, self-fulfilled, ambitious and unwilling to take shit from anyone, Miss Piggy stood in contrast to the common submissive stereotypes for female characters. Instead of being a straw-man version of a Strong Female Character, she was allowed to be flawed in realistic ways; she’s vain and unquestionably selfish and (forgive me) an unrepentant spotlight hog. She’s allowed to be complex—she may be self-absorbed, but she’s also capable of being giving and sweet when the mood strikes.

Unfortunately, as the New Republic’s Noah Berlatsky points out, one of her flaws is that she’s incredibly abusive to her erstwhile love-interest, Kermit. And by laughing at them, we become complicit in his abuse.

The topic of abuse in relationships is a thorny one. Our default image of an abuser is a mustache-twirling villain—either a low-class, undershirt clad (a “wifebeater,” if you will) slob or an alternately charming and terrifying sociopath worthy of a cheesily named Lifetime original movie starring Tori Spelling. The victim is almost always a woman—a young innocent, unaware of the trap that she’s fallen into.

One of her flaws is that she’s incredibly abusive to her erstwhile love-interest, Kermit. And by laughing at them, we become complicit in his abuse.

But in clinging to this vision of domestic abuse, we inadvertently erase the other victims of abusive relationships. While we rarely imagine men as the victim instead of the abuser, it’s far more common than one would expect. According to the Centers for Disease Control, up to 26 percent of homosexual men, 29 percent of straight men and, 39 percent of bisexual men have reported being the victims of domestic violence. The abuse isn’t always physical, either; up to 48 percent of men reported that they experienced psychological and emotional abuse at the hands of their partners.

That’s a chilling statistic in and of itself. But what makes it more disturbing is that this is a best guess. Most male victims of domestic abuse are unwilling to come forward or even admit that they’re victims in the first place. Men who suffer from domestic abuse often fear being ignored or even ridiculed for letting a woman—someone presumed to be weaker—have so much power over them. It’s difficult enough for men to get help at all; most abuse shelters are either exclusively for women or aren’t equipped to shelter men as well. Many men have a hard time getting the authorities to take them seriously—doubly so if they’re gay or bisexual.

Even if they don’t go to the authorities for help, simply finding support from one’s peers or society in general can be difficult. Admitting that they’re afraid of a girl is tantamount to admitting to not being a man. And if the abuse is psychological or emotional… well, hell, what kind of pussy are you to let a little name-calling get to you?

It’s funny when women do it

Part of the reason why it’s so difficult to even talk about the male victims of abusive relationships is that we still portray men being abused as comedy. One of the keys of humor is the reversal of expectations. When someone who is physically smaller and weaker gets violent with someone larger, we laugh. After all, society still expects men to be the strong, dominant ones, while women are smaller, weaker and more submissive. Watching them turn the tables and be the aggressor—physically, emotionally, or even sexually—is unexpected and, thus, comedic.

And it always gets explicitly coded as such. When Miss Piggy gets angry at Kermit, Gonzo, or any other character, she winds back with a “HIYAAAA” and karate chops them across the room—and we’re given accompanying wacky sound effects to underscore the humor of the situation. The soundtrack reminds us that it isn’t meant to be taken seriously.

When tiny Tweety Bird or gets the better of the much larger Sylvester the Cat or the Road Runner outsmarts Wile E. Coyote, it’s likewise funny: The wacky, unrealistic injuries—like an anvil being dropped on someone’s head—let us know it’s OK to be cool with it. If Rachel gets fed up and smacks Ross with a magazine, the laugh track cues us to chuckle along.

Moreover, our image of an abusive female partner and an abused male partner is one of absurdity—a woman wearing her hair in curlers, possibly with a facial mask, tapping a rolling pin or frying pan menacingly as she waits for her loser husband to come slinking back in the dark of night and submit to her with a weak “yes, dear.” The sad-sack, the milquetoast, and beta male are seen as weak and almost deserving of being abused for not having the spine to stand up to her. And when we laugh at them, we normalize and validate their behavior.

Abuse is more than the violence

Part of what’s so horrifying about the way we are expected to laugh at Miss Piggy’s abuse of Kermit isn’t the violence—or at least it’s not only the violence. After all, Kermit is never shown as being injured when he’s thrown across the room. Like all cartoon characters, he bounces back from injury as if it never happened.

But while we all recognize the violence as slapstick, we don’t notice the other issues. After all, domestic abuse isn’t always or exclusively about violence. It’s about control and fear, about running roughshod over somebody without their consent and keeping someone too cowed to object.

Some of the signs of an abusive relationship include:

Over the course of three TV series, nine movies and an untold number of specials, we see Miss Piggy do all of these things. Kermit continually lives in fear of his girlfriend, knowing that even simple misunderstandings or slips of the tongue will result in Miss Piggy erupting like a porcine Vesuvius.

On at least three separate incidents, she attempts to coerce Kermit into a relationship, beating him when he refuses. Other times she reacts with violence and rage whenever Kermit commits the “sin” of breaking up with her, simply hugging a friend, talking to a woman, or even just standing too close to them. She uses threats of tantrums and violence to force Kermit to give her starring roles, to write scenes for her in their show, and to advance her career.

Even if we were to remove the physical nature of Piggy’s abuse of Kermit, the fact remains that she is an agent of terror in his life. There’s never a moment where he can relax while she’s around—for fear that she’s going to see him and rage out at him. And the more we laugh at their antics, the more we excuse her possessive, controlling behavior.

Kermit didn’t break up with her—he escaped his abuser

Framing the end of Kermit leaving Miss Piggy and dating Denise as a breakup—or trading her in for a thinner, younger model —ignores one of the harsh realities of an abusive relationship: It’s incredibly difficult for a victim to escape their abuser for good. People in abusive relationships—especially emotionally abusive ones—often internalize the abuse, believing that they actually deserve their maltreatment.

When someone who is physically smaller and weaker gets violent with someone larger, we laugh.

Many abusers—like Miss Piggy—will blow hot and cold, keeping their victims off-balance. They will be violent and then contrite, begging forgiveness. They’ll be loving and affectionate one minute, then cold and accusatory the next. The unpredictability of their behavior leaves the victims continually scared and insecure, always trying to keep their abuser happy in order to avoid another outburst.

The fact that Kermit found the strength to leave Miss Piggy shouldn’t be portrayed as a breakup but as a miracle. Perhaps by being with Denise he can actually heal and recover from the physical and emotional damage that Miss Piggy has inflicted on him for over four decades. So while we’re chortling over the parade of boy-toys and celebrity hook-ups that Miss Piggy engages in to make Kermit jealous, let’s not forget: It’s not just about the frog who got out of a toxic, violent relationship. It’s about the millions of men who don’t leave.

Photo via JeffChristiansen/Flickr (CC BY 2.0)