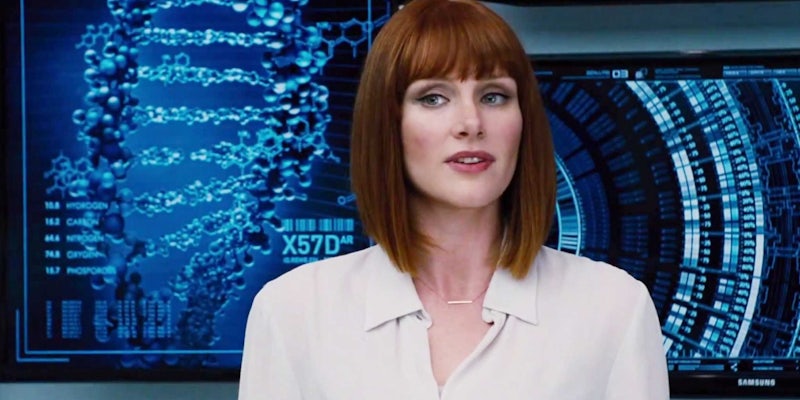 It's the logic behind it.

The Internet is currently obsessed with the gender politics of Jurassic World. The controversy started back in April when Joss Whedon tweeted his dissatisfaction with a clip from the film: “I’m too busy wishing this clip wasn’t ‘70s era sexist. She’s a stiff, he’s a life-force—really? Still?” However, since the movie’s release, that criticism has turned into a collective roar that would make Indominus Rex proud.

It seems like everyone is weighing in on the issue of Claire Dearing (Bryce Dallas Howard), Jurassic World’s chilly female lead. Is she an awful caricature of a career woman? Or is she a flawed human being who Learns a Life Lesson and then starts kicking ass with the best of them? And most importantly—can anyone actually run through the jungle in high heels?

Howard was quick to defend Jurassic World against Whedon’s remarks, as was director Colin Trevorrow. Chris Pratt skipped around the set of the Late Show with James Corden in a pair of bright red stilettos to show how badass running in heels actually is.

But no matter how heartily defenders insist that Jurassic World doesn’t have a gender problem—or, worse, that it doesn’t matter whether it does or not because the audience is only there to see some glorified dinosaur violence—the truth is that the movie is sexist. And while acknowledging that fact is crucial, what’s maybe even more important is that we’re talking about it.

Gender roles in action movies are having a moment. Maybe it’s because Mad Max: Fury Road set the bar so high, or maybe because the Jurassic franchise seems to have taken a big step back from its legacy of empowered female characters, or maybe women are just really, really fed up with the status quo. Whatever the particular zeitgeist that led to this moment, the good news is that it’s here.

I love how #JurassicWorld is like, "Phew, thank goodness Mad Max did the empowered complex woman character thing, now we're off the hook."

@radicalbytes If you thought Mad Max was too "feminist" and "progressive," Jurassic World may be the blockbuster for you!

One of the most frustrating things about films like Jurassic World is that they’re not intentionally sexist. In fact, according to their creators, they’re intended to challenge gender roles. In an interview with Italian film publication In Bad Taste, Trevorrow said that the movie starts with “characters that are almost archetypes, stereotypes that are deconstructed as the story progresses.”

And we do actually see some evidence of that in the film, especially with Vivian Krill (Lauren Lapkus), a park employee who works in the control room. Vivian is smart, funny, laid back and has a great sense of boundaries. Her finest moment comes just as the Jurassic World staff are being evacuated, when her obnoxious co-worker Lowery (Jake Johnson), clearly the hero of his own internal action movie, loudly announces that he plans to stay because someone has to. He then leans in to try to kiss her, because that’s what he’s supposed to do.

But instead of letting Lowery smooch her, Vivian backs away and tells him that she has a boyfriend. When Lowery fumblingly says that he’d thought she was single because she’d never mentioned a boyfriend, Vivian smoothly that’s because she was at work and was trying to keep things professional. Then she awkwardly hugs Lowery and leaves. It might be the best scene in the movie.

Vivian is the kind of character who ought to be steering the helm of Jurassic World: a woman who is comfortable enough with herself to know what she wants and is able to say no and mean it.

Vivian is the kind of character that ought to be steering the helm of Jurassic World: a woman who is comfortable enough with herself to know what she wants and is able to say no and mean it.

Instead, we get Claire, a controlling ice queen with a sharp red bob and an even sharper white suit. Claire wholly embodies the brittle career woman stereotype. She’s obsessed with profit, thinks of the dinosaurs as “assets” rather than living creatures, and gets a nanny for her visiting nephews instead of spending the weekend with them. She spends most of the movie running around shrieking and making bad decisions, and only succeeds when she begins listening to everyman dinosaur trainer Owen Grady (Chris Pratt).

She does have a handful of excellent moments, but only after she’s realized that everything about how she’s been living her life is terrible.

According to Trevorrow, “the real protagonist of the movie is Claire, and we embrace her femininity in the story’s progression.” It’s hard to know exactly what that means, unless it’s a reference to Claire’s superhuman ability to run through the jungle in high heels. Most likely it has something to do with the final scene, where Claire apparently feels her biological clock ticking for the first time as she gazes soulfully at her nephews hugging their parents; she then shoots Owen a smoldering I-want-to-have-your-babies look before the two of them ride off into the sunset together. Apparently embracing femininity means rolling up your sleeves and getting dirty, while finally realizing that motherhood is your natural destiny.

Perhaps the real problem with Jurassic World isn’t so much that it’s sexist, it’s that the creators don’t understand why it’s sexist. Based on his interviews, it’s pretty clear that Colin Trevorrow thinks that Claire is a Strong Female Character, and this arguably makes it worse than if Trevorrow was just your run of the mill misogynist—ala Michael Bay. It’s one thing to churn out bad sexist media when you’re not paying attention, but it’s quite another to hit so far off the mark when you’re apparently giving it your all.

It would be easy to write off action movies as a male-dominated genre where casual sexism just comes with the territory; it’s at the point where we almost consider gritting our teeth through awful stereotypes of women to be the price of admission to watch stuff blow up.

But if the last few months have proven anything, it’s that women are in fact a huge market when it comes to these types of films, and their thoughts and opinions about them matter. Mad Max: Fury Road—an action movie that managed to be both very good and explicitly feminist—did incredibly well at the box office. Statistics show that nearly half of the attendants of Jurassic World‘s opening weekend were women. Turns out that men aren’t the only ones who love fast-paced, high-adrenaline blockbusters.

When explaining the reasoning behind Claire’s character, Trevorrow said, “There’s no need for a female character that does things like a male character, that’s not what makes interesting female characters in my view.” That type of statement right there encapsulates everything that’s wrong with movies like Jurassic World—the idea that women are some kind of specialty characters that need to be handled differently than others.

To fix this problem, we need to stop treating female characters as if they have an asterisk next to them and start treating them like people.