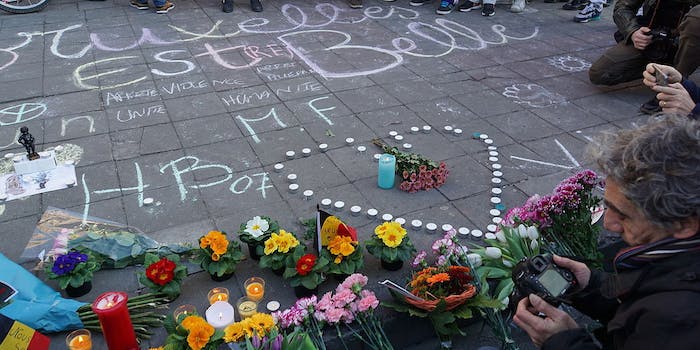 It’s OK to turn off the news after terror attacks

It’s hard not to feel as though we’ve reached a tipping point of tragedy overload.

I don’t know how many people died in last week’s terrorist attack in Brussels or who was responsible. In fact, I don’t know what happened at all. On March 22, reports of a suicide bombing in the city began to trickle onto the Internet, and I was sitting next to a co-worker who informed me that the explosives contained nails. “Nails,” she repeated, as if to underscore the unthinkable inhumanity of the act. I’m paid to follow these stories for a living—to read the coverage and write about what’s happening and what it means.

But this time, I did something I rarely do: I tuned it out. I didn’t read a single story about the attacks, aside from glancing over the smattering of headlines that filled my News Feed. I tuned it out. Just five months after the terror attacks in Paris, I couldn’t do it again.

Just five months after the terror attacks in Paris, I couldn’t do it again.

The coordinated attacks on the Bataclan concert hall last November, as well as five other locations, hit home for Americans in a way few other stories seem to. I lived in Paris for a short time after college, and I worried for the friends I had made there. Were they safe? Were the people they loved safe? Others I knew had similar ties to the city, while many of those following the event were horrified and mesmerized by the cinematic descriptions of the violence itself: the nearly three-hour siege that ended in the deaths of 140 people. When the Charlie Hebdo attacks took place earlier in the year, onlookers at the scene reportedly thought a movie was being filmed. It simply didn’t seem real.

Reports of the unrelenting, surreal bloodshed experienced in locations from Paris to Brussels and from San Bernardino to Lahore both make us informed about what’s happening in the world and feel as though we are powerless to stop it. Psychologists describe this experience as “learned helplessness,” and it’s becoming an increasing staple of our media environment as constant updates about mass terror have become an inescapable presence on social media. It’s hard not to feel as though we’ve reached a tipping point of tragedy overload.

We’re faced with a choice: Do we shut it off altogether or change how we consume violence? The answer may be somewhere in the middle.

Researchers have long warned that bad news can have extremely adverse effects on personal health. In a 2014 survey from National Public Radio, the station polled 2,500 listeners on their media habits over the course of the past month. Nearly a quarter reported that they’d been more stressed than usual in that time period—citing exposure to the news as one of the biggest sources of that stress. A prior report from researchers at UCLA following the 2014 Boston Marathon bombing suggested that those who watched six or more hours of coverage of the events experienced “higher acute stress” than those who actually witnessed the events firsthand.

When people constantly consume negative news coverage, it not only affects their mood but also their worldview. According to University of Texas–San Antonio professor Mary McNaughton-Cassill, too much bad news incites a malaise among viewers. As she told New York magazine, those exposed to such coverage are more likely to agree with statements like: “Why should I vote? It’s not gonna help,” and “I could donate money, but there’s just gonna be another kid who’s starving next week.”

We’re faced with a choice: Do we shut it off altogether or change how we consume violence?

If negativity in the news cycle powerfully affects us, it’s because humans’ brains are actually hardwired for it. “[T]wo-thirds of neurons in the amygdala are geared toward bad news, immediately responding and storing it in our long-term memory,” Aeon’s Jacob Burak writes. “This is what causes the ‘fight or flight’ reflex—a survival instinct based on our ability to use memory to quickly assess threats. Good news, by comparison, takes 12 whole seconds to travel from temporary to long-term memory.”

This phenomenon is, thus, a product of evolution: Our brains are designed to respond to potential emergencies, whether it’s the presence of a dangerous predator or—in a modern context—a mass shooting that takes place in a faraway town. Burak calls it our “negativity bias,” one that explains why a single rude comment or bad interaction can impact our entire day, whereas the happiness we experience from an unexpected promotion is fleeting.

That bias, however, can be a detriment in a 24-hour news cycle, because it means that we may perceive more danger than actually exists. In his 2011 book, Better Angels of Our Nature, cognitive scientist and psychologist Steven Pinker (best known for co-authoring Freakonomics) found something that may be surprising: The world is more peaceful and less deadly than at any previous point in history. However, Gallup polls consistently indicate that—whether it’s the economy, moral values, the state of the government, or terrorism—Americans believe things are getting worse.

Facebook is a powerful source of that portent. The 1995 Oklahoma City bombing was the first act of terror to go viral, but that event took place in an era when people absorbed their news from network television, radio, or newspapers. More than two decades later, that is no longer the case. A 2014 survey from Pew Research found that social media was where the vast majority of media consumers (74 percent) got their news. And 78 percent of respondents had shared news stories on Facebook.

If our media era has been branded the “information age,” it’s because we simply have more information and more ways to consume it than ever before. After all, Facebook is just one of a number of platforms where Americans get their daily digest—including Twitter, YouTube, LinkedIn, and Tumblr. Even Snapchat is getting into the news game: In 2015, the ephemeral media company unveiled a tool that would allow users to share news stories on the platform through Snapchat’s “Discover” function. You can now trade updates about what’s happening in Brussels, Paris, or Lahore on the app the same way you can one of its trademark “Snaps.”

There are certain days where you just can’t take more tragedy, where it becomes overwhelming and depressing.

These tools offer users an unprecedented reach to inform, but it also creates a certain amount of fatigue. There are certain days where you just can’t take more tragedy, where it becomes overwhelming and depressing. You feel as though you have no choice but to ignore it altogether—for the sake of your mental health. So what do you do?

The solution is both a matter of what you consume and how you consume it. Harvard Business Review’s Shawn Achor and Michelle Gielan encourage news readers to seek out sources that offer “empowering, solutions-focused news.” “Seek out stories on your favorite news site that are transformative,” they recommend, “which means that they empower people with actions steps and potential solutions instead of just focusing on the problems.”

The greatest antidote to fear is hope: Curating your News Feed to highlight stories that offer a positive outlook. In the case of Brussels, that might be coverage about communities coming together to take a stand against terror. There’s a reason increasing numbers of Americans reportedly feel like the terrorists are winning: When we only hear about people being gunned down and the families mourning—not those working to stop the violence by creating a safer, more understanding world—it sends the message that they are. There’s a place for grief, but we also need to believe in the power of people to overcome.

Turn off your Internet for a while. Take a walk, have a cup of tea, and come back when you feel better.

But being a mindful consumer of news often means cutting back on the amount of news you consume by focusing on quality, not quantity. If media analysts cite an increase in noise, it’s the responsibility of readers to be selective—and unfollow when necessary. Should your Facebook News Feed be making you depressed, anxious, and fearful about the state of the world today, get new news. Turn off your Internet for a while. Take a walk, have a cup of tea, and come back when you feel better.

As much as I grieve for the families in Brussels and Lahore, I don’t regret shutting off my Facebook last week, because it was a reminder of something important: What you pay attention to is a choice, and it’s one that greatly affects your personal well being.