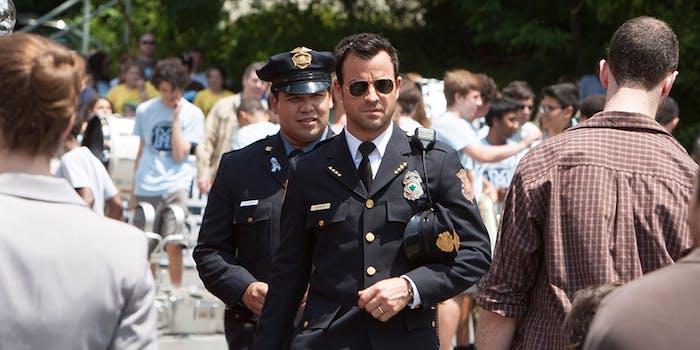 The problem with ‘The Leftovers’ and ‘The Strain’

The Internet backlash has come for two of the summer's buzziest new shows.

Once upon a time, there was a show called Lost. Not everybody liked it, and its finale was one of the most polarizing pieces of television from the last decade. But the series had an indelible impact on the medium and remains one of the most influential and acclaimed shows ever.

By now, it’s widely known that the two masterminds behind the show were a pair of writers named Damon Lindelof and Carlton Cuse. Both honed their chops on a CBS procedural called Nash Bridges (an unlikely breeding ground for famous writers of the TV world and beyond), which was also created by Cuse. Later, Lindelof would go on to develop and co-create Lost with future Hollywood heavyweight J.J. Abrams, who took over the reigns from screenwriter Jeffrey Lieber. When Abrams exited to become the most powerful man in Hollywood, Cuse stepped in to fill the creative gap. The rest, as they say, is history.

But this isn’t the story of Lost. This is the story of summer, 2014, when both Lindelof and Cuse brought new shows to the air, with HBO’s The Leftovers, and FX’s The Strain, respectively.

This is not the first place where The Leftovers and The Strain have been compared. New Yorker TV critic Emily Nussbaum considered their relationship to each other. Nussbaum wrote, “Like The Strain, The Leftovers is obsessed with grief and terror—but, rather than make you jump, it makes you cry.”

Most critics have not been as kind to either series. The Leftovers does have its ardent defenders, however, its detractors appear to be greater in number and more vocal about their distaste, with many quitting the show outright. After a particularly brutal episode, Entertainment Weekly’s Melissa Maerz recently asked, “The Leftovers is too much of an endurance test… Why am I trying to get through this relentlessly grim series again?”

It is true that almost all the reactions to The Leftovers have focused on how hopelessly bleak it is—positive ones included. But the other major issue with The Leftovers is simply how messy it is. This is a show that seems content to focus on asking questions, rather than providing answers.

That technique, according to many, also happens to be what ultimately led to the downfall of Lost.

With Internet recap culture on the rise, Lost initially came up in the perfect era of television. As Matt Fowler at IGN reminisces, “When we think of Lost—and by that I mean when we think of Lost fondly—we often immediately go to the big series mysteries. The gotcha-style ‘We gotta go back!’ moments. And the puzzles and clues that made us take to the Internet to discuss our theories.”

For awhile, everybody loved discussing said theories. “Critics and fans alike spent previously unheard of amounts of time just turning over details of this crazy show, mostly written by this guy, Damon Lindelof. Television bloggers started gaining fame by just obsessing over and churning out content about it,” recalls Nick Farley for Den of Geek.

Yet as Lost created a labyrinth of mystery after mystery, it eventually became clear that not everything was going to be resolved in a neat and tidy fashion. Some of the audience soured. And as Farley brings up, Lindelof’s writing would continue to be defined by disorganized, unexplained jumbles of ideas.

By creating so many questions and being so withholding, Lindelof just couldn’t get to all the answers. The same problem plagued his next high profile feature, Ridley Scott’s Alien prequel, Prometheus. The film introduced tons of interesting concepts and ideas without really revealing what it all meant. It was a troubling trend; was Lindelof purposely being enigmatic to challenge audiences, or was he just a lazy writer who couldn’t come up with real explanations for things (like what the hell the smoke monster is) and just does them anyway?

Despite these criticisms, Farley is another critic who’s stayed onboard with The Leftovers, declaring, “Let the Internet thinkpieces flow.” But how much can flow from a series that’s wilfully alienating its audience? Rather than engaging with the same kind of fans who invested their time in theorizing about Lost, Lindelof has actually gone in the opposite direction for The Leftovers, quitting Twitter and all but guaranteeing that he won’t be solving the central “mystery” at the heart of the show anytime soon. In a time when the Internet drives so much of the discussion around TV, this is a risky move.

But if the Internet is confused and angered by The Leftovers, they’re more outright bored by The Strain. As Zack Handlen at The A.V. Club puts it, the whole thing is not entirely incompetent but is overly tired and familiar.

If nothing else, The Strain looks great… It’s a pity that nothing else is quite so memorable… the TV version just takes the cliché ball and runs with it. The show is populated with a laundry list of thinly realized tropes: the protagonist who’s great at his job but just can’t manage his personal life; the co-worker who pines for him; the old man uncertain about facing down an ancient foe; another old man selling his soul for a chance at immortality. Some of these tropes fair better than others, but few are memorable. When the show tries to develop its ensemble, it stops the story’s momentum dead in its tracks… As it stands now, the show is a mixture of tepid family drama, tepid crime drama, goofy but basically acceptable sci-fi gore, and an epic saga about betrayal and corruption that could be something but could just as easily collapse into the biggest cliché of all.

For David Wiegand at the San Francisco Chronicle, meanwhile, The Strain succeeds where it should not and fails where it should thrive. “There’s no scripted humor in the show, but a few unintentional guffaws would easily qualify The Strain for Mystery Science Theater 3000.” Wiegand continues, going on to bemoan, “The Strain is watchable, but honestly, that isn’t good enough when you’re talking Guillermo del Toro and FX. In both cases, we expect more. We do get ‘more’ in one regard—more plot strings than anyone needs—but not enough precision, quality of writing and performances, and, mostly, inspired directorial vision.”

If The Strain does have one saving grace, it has to be Guillermo del Toro, whose creature feature sensibilities are never lurking far beneath the show’s surface. But for all the del Toro-ish flourishes, The Strain never fully lives up to its potential. At the end of the day, it feels too much like what it’s turning out to be: another average TV show.

This is especially vexing considering that del Toro, a director who is especially gifted at blending elements of the real world with the fantastical, is involved. Surprisingly, The Leftovers does a fairly convincing job of merging genre storytelling with elements of identifiably “real world” suffering and horror (perhaps too much so). Granted, The Leftovers also has the advantage of a light genre touch, whereas (spoilers) The Strain is a full-on vampire tale. Nevertheless, one wonders how with del Toro and Cuse onboard, the result could be so stuffed with artifice.

When it comes right down to it, The Strain’s biggest trouble is that it can’t decide whether it wants to embrace its campy horror qualities or to focus on being a “serious” cable drama. Bates Motel, the other show Cuse has on the air right now, has at least (after suffering middling reviews itself), ostensibly embraced the first of those options. But at the moment, The Strain is caught in between the two. And the outcome is a show that exists but doesn’t do much else. It’s “good” at best, but it won’t get everyone talking the way Lost did, and it may not even get few people talking the way The Leftovers has. Its a TV show that screams, “This is a TV show!” It’s standard, by-the-book fare, which, despite its impressive pedigree, doesn’t come close to being very daring—or very interesting, for that matter.

Of course, not every show has to take such risks. The Strain could do fine if it finds a loyal enough audience to return week after week. But when so much of modern TV lives or dies based on passionate fandom, usually generated on the Internet, there’s a chance that a response of “meh” won’t be enough. Say what you will about Lost—but love it or hate it, people had strong opinions about it, if nothing else.

What we finally have here is one show that’s ambitious, high-minded, and a complete mess, and another that’s competent and conventional, but utterly forgettable. The Leftovers has generated a strong, visceral reaction, but it’s hard to see it going anywhere if Lindelof persists in letting consistent story structure fall to the wayside (interestingly, The Leftovers episodes which have been the most acclaimed so far have followed Lost’s “exploring a different character each week” format). The Strain, on the other hand, is fine if all you want to do is kill an hour with some aggressively unmemorable TV, devoid of any wonder or innovation.

Lindelof needs Cuse to tell stories that are miraculous and challenging, but which also understand the meaning of restraint and general cohesion. And Cuse needs Lindelof to tell stories that are well-plotted and expertly crafted, but which also have the guts to be bold and unique. They were never better than when they were together, and their work has suffered from their being apart.

Granted, all of this is merely a theory. There are a myriad of other possible reasons why The Leftovers and The Strain have struggled to maintain quality in their initial weeks. For one thing, both men are working from ideas that are not their own. Lindelof adapted his show with Tom Perotta, who wrote the novel the series is based on. Cuse, too, is working with a book as his source material—one which was penned by del Toro, along with co-writer Chuck Hogan. Del Toro and Hogan also co-created the show, and in fact, Cuse hasn’t written a single episode at this point, though he is The Strain’s showrunner.

Then again, Lost didn’t start off as Cuse and Lindelof’s idea either. But look what happened when they ran with it. You don’t have to like Lost, but the truth is still that with it, these two men changed the face of TV forever. Who knows—if they got back together, maybe they could at least change the face of TV for a few weeks.