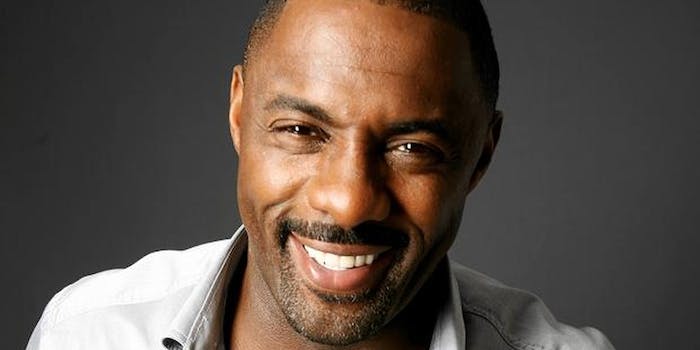 As the saying goes, black people have to be “twice as good to get half as much” of anything their white peers get. And yet again, there’s another example of how this cultural double-standard plays out in Hollywood.

On Tuesday, Anthony Horowitz, writer of the new James Bond novel Trigger Mortis, dismissed the idea of Idris Elba playing James Bond because he’s “too street.” “Is it a question of being suave? Yeah,” Horowitz added. Although Horowitz later apologized for his comments on Twitter, the fact still remains that Horowitz doesn’t have a clue about Elba’s range or appeal.

For those unfamiliar with Elba’s career, he’s not only the first black man to grace the cover of Maxim, he’s also the same actor who wooed audiences in his role as ruthless drug dealer Stringer Bell in HBO’s acclaimed series The Wire, which many critics consider the best TV show ever made. If his debonair good-looks, magnetic English accent, earnest grin, and screen time opposite Beyoncé in Obsessed doesn’t demonstrate how “suave” he is, then what possibly could?

But therein lies the problem: Black people shouldn’t have to prove that they can successfully deliver on white archetypes or fit into roles originally written for white characters in order to be worthy of praise. Elba especially doesn’t need to show that he could play James Bond. As a matter of fact, Elba already captures the essence of Bond in real life, but his allure doesn’t end when the credits roll. His marketability as a “Bond” type goes without question.

This isn’t about Elba’s lack of a “suave” persona—on the contrary, black masculinity is what Horowitz and Hollywood fear the most. Elba doesn’t actually need Bond; rather, it’s the other way around.

Forget Idris Elba as Bond. It won't happen. What they SHOULD do is have Craig's next Bond be a buddy film with 003 played by Elba.

Elba’s career reflects his varied, illustrious levels of success and mainstream appeal. He has a massive online fanbase, receives constant buzz for his starring role in the BBC’s Luther, and also dabbles in the music industry—rapping, DJing, and producing. Yes, Elba sometimes acts in gritty and intense roles—like Netflix’s forthcoming Beasts of No Nation—but he also plays the likes of Nelson Mandela and Heimdall.  And, of course, he’s incredibly handsome. There are countless GIFs to prove this: everything from his scowl, slow-motion blinking, to his penetrating stare.

One would assume he’d be the perfect actor to play Bond—who is traditionally portrayed as a complex, sexually arousing character. In the past, 007’s shoes have been filled by a range of white men from Pierce Brosnan to Sean Connery and Daniel Craig. Although these men are very good-looking, their sexuality does not operate in the same way as Elba’s. Black men, in and out of the public eye, have been portrayed as having superhuman physical strength, sexual prowess, and confidence.

When held alongside the masculinity of white men, black masculinity has historically been constructed as threatening, as “other,” as a means of depriving black men of their humanity and/or sexual agency.

When held alongside the masculinity of white men, black masculinity has historically been constructed as threatening, as “other,” and as a means of depriving black men of their humanity and/or sexual agency. Take, for example, the 2008 cover of Vogue, depicting NBA superstar LeBron James and supermodel Giselle Gisele Bündchen. The photograph of the two appeared harmless but was an unfortunate reminder of old, racist depictions of black men and white women.

James replicated the brute trope of the title King Kong character, bouncing a basketball, bearing teeth with mouth agape, while Gisele Bündchen posed delicately in a sheer outfit with voluminous blonde hair—repurposing the pure white female love interest that had to protected. As Jemele Hill wrote at ESPN, the magazine’s quest to highlight the physical differences between athletes and models reinforced animalistic stereotypes of black athletes and black men.

Whether it’s being portrayed as an animal or called “too street,” these limiting ideas of what it mean to be a black man haven’t faded away just yet. And Horowitz’s words, indeed, point to a coded appeal to protect the role of Bond for white men out of a fear of what black masculinity might mean for the role. In Horowitz’s case, visualizing a handsome black man filling in the traditionally white Bond character is too much to digest.

Although Horowitz named Adrian Lester, another black British actor, in his apology, why didn’t he mention that in his first place? He didn’t provide an alternative to Elba playing the role, but waited until the backlash to think of someone else. But neither one is going to happen—and it doesn’t really need to.

Landing a role is not wholly contingent upon talent and good looks, as a casting director’s idea of what it means to be “fit” for a part often skews toward white as the default in terms of marketability and appeal. This not a new issue, if Hollywood’s ongoing problem with diversity is any indication, and it doesn’t seem to be easily going away.

We should always be talking about such systemic racism in Hollywood because it’s a continuous problem. However, we cannot allow Hollywood’s hangups around race to narrow the ways in which we can evaluate a black actor’s greatness. We cannot make the mistake of thinking that a black actor makes it if and when he usurps a role from a white person. Yes, that feeling is satisfying, but it’s not necessary.

Let James Bond be white and Scottish. We should be pushing to create our own stories on screen because our dynamism as black people is undeniable.

I wholeheartedly endorse the subversion of traditionally white male characters, but Idris Elba does not need James Bond. The franchise needs him. As our cultural landscape diversifies, audiences are growing increasingly tired of seeing white men set the tone for how they perceive sexy, iconic characters, and we should mobilize to create new personas—those that aren’t inextricably intertwined with whiteness.

Let James Bond be white and Scottish. We should be pushing to create our own stories on screen because our dynamism as black people is undeniable. That very cultural vitality is Elba is going to be just fine—with or without the role. His achievements demonstrate that he doesn’t need to grovel for any kind of attention. He can center himself just by walking into the room or opening his mouth. And for that, we should be thankful.

Morgan Jerkins is a New York-based writer whose work has appeared in the Guardian, BuzzFeed, and Salon, among others. Follow Morgan on Twitter @MorganJerkins.