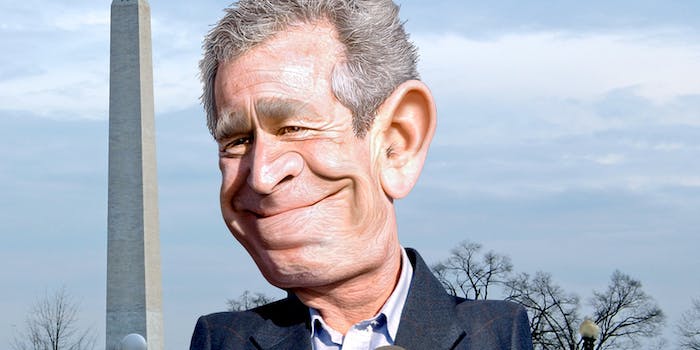 5 reasons George W. Bush is still one of the worst presidents ever

That Dubya in his name doesn't stand for #winning.

George W. Bush is trending on the Internet for a surprising reason. A CNN/ORC Poll that recently hit the Web yielded some good news for the embattled former president: For the first time since the months after his reelection in 2004, more Americans have a favorable opinion of him (52 percent) than an unfavorable one (43 percent).

George Bush's approval rating is above water for the first time in a decade https://t.co/1rEe6i4aLK pic.twitter.com/eI1Aw5jIQF

George Bush #trending in new poll: American's agree, he is awesome at doing nothing. https://t.co/a07hZKBRVc

Before Republican Twitter starts popping its proverbial champagne corks, however, it would be wise of Republicans to remember that most former presidents become more popular in the years after their administrations have ended. Both Jimmy Carter and George H. W. Bush were widely disliked when their presidencies ended but are held in much higher regard today.

More important, though, there is the simple fact that a president’s legacy is ultimately determined by whether Americans were better or worse off after he left office. How does Bush measure up?

Few would disagree that the September 11 terrorist attacks were a defining moment of Bush’s presidency. As president, his foremost responsibility was bringing the mastermind behind those attacks—al-Qaeda leader Osama bin Laden—to justice.

Bush failed in this mission. Instead of prioritizing hunting bin Laden down in Pakistan, where he was suspected of hiding (and where Obama promised to get him during the 2008 presidential election), Bush waged two costly and ineffective wars. The first was against Afghanistan, a nation that harbored bin Laden and his al-Qaeda terrorists but was not formally governed by them, and the second against Iraq, a nation that had absolutely nothing to do with September 11.

In the process, he significantly damaged America’s reputation overseas (which didn’t begin to improve until the beginning of Obama’s presidency) and destabilized the Middle East in ways that we’re still seeing today. Remember that time Jeb Bush was asked about his brother’s role in creating ISIS? That’s because his brother helped create ISIS.

2) His policies caused the Great Recession

When Bush took office, he inherited a strong economy built by President Bill Clinton: unemployment had fallen from 7.3% to 4.2%, creating more than 22 million jobs in the process, and the median family income had increased by more than $6,000.

By comparison, Bush’s presidency only managed to oversee the creation of fewer than 1.1 million jobs, by far the lowest of any president since Harry Truman, while income inequality expanded at staggering levels. The top 10 percent of American earners pulled in almost half of total wages, the most lopsided wealth distribution since 1917.

Although the economic stagnation became apparent very early in his first term, it didn’t turn into a full-fledged recession until the collapse of America’s financial industry in 2008, after which unemployment shot up from 6.2 percent in September (the month of the crash) to 7.7 percent in January (the end of Bush’s presidency). This was an average increase of 0.3% per month.

Considering that Bush’s policy of Wall Street deregulation was largely responsible for the reckless practices of the “too big to fail” banks that brought the economy to its knees, it’s fair to say that this was one of the two most significant fiscal failures of his administration.

The other, of course, was his squandering of the Clinton budget surplus. When Clinton left office in January 2001, he bequeathed America with a projected $1.9 trillion surplus. By the time Bush handed the economy off to Obama in 2009, the Congressional Budget Office projected $1.2 trillion in debt, due largely to Bush’s $1.5 trillion in tax cuts to the wealthy, as well as the additional trillions spent on the aforementioned wars in Afghanistan and Iraq.

3) He eroded American civil liberties to an unprecedented degree

When Sen. Russ Feingold (D-Wisc.) cast his vote against the USA PATRIOT Act—the only member of the Senate to do so—he explained his reasoning as follows:

In the play, A Man for All Seasons, Sir Thomas More questions the bounder Roper whether he would level the forest of English laws to punish the Devil. “What would you do?” More asks, “Cut a great road through the law to get after the Devil?” Roper affirms, “I’d cut down every law in England to do that.”

To which More replies:

“And when the last law was down, and the Devil turned round on you—where would you hide, Roper, the laws all being flat? This country’s planted thick with laws from coast to coast… and if you cut them down… d’you really think you could stand upright in the winds that would blow then? Yes, I’d give the Devil benefit of law, for my own safety’s sake.”

America’s surveillance age hasn’t made the world any safer from terrorism, sacrificing your privacy for what’s proving to be nothing more an endless war on America’s own people.

4) He bungled his response to Hurricane Katrina

Believe it or not, it isn’t that difficult for a president to effectively manage disaster relief after a hurricane: Lyndon Johnson famously mastered the aftermath of Hurricane Betsy in 1965, while Barack Obama’s response to Hurricane Sandy was so effective that it was erroneously credited for his reelection in 2012.

By contrast, Bush utterly failed when Hurricane Katrina wreaked havoc on the Gulf Coast in 2005—a subsequent report by the House of Representatives found that his administration disregarded numerous warnings of the threat to New Orleans, did not execute emergency plans, and neglected to share information between different departments that could have saved lives.

5) When it came to one of the biggest civil rights issue of his time, he placed himself on the wrong side of history

When future historians look back at the early 21st century, there is little question that they will view the campaign for LGBT equality as one of the major civil rights movements of the era. Yet not only did Bush fail to advocate on behalf of the LGBT community (despite his vice president having a lesbian daughter and his party being chaired by a closeted gay man, Ken Mehlman, during his second term), but he actively exploited anti-gay bigotry during his reelection campaign in 2004. This was particularly the case in states like Ohio, where its pull among so-called “value voters” played a considerable role (alongside racially based voter suppression) in Bush’s winning that state—and with it, the general election.

None of this means that George W. Bush is a bad human being, or even that he set out to cause harm to the nation he professes to love. At the same time, no bounce in his approval rating can eclipse the damage that he did while in office. More Americans may like Bush than dislike him right now, but when his legacy is ultimately appraised, the final verdict will not be a kind one.