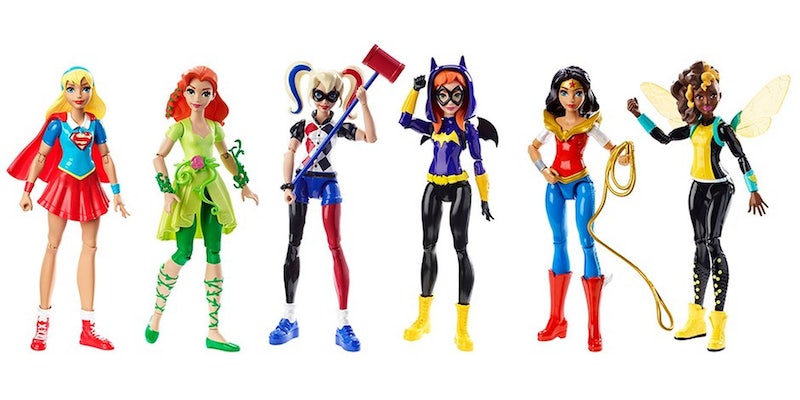 If you were one of the many people wondering #WheresNatasha, after Marvel declined to release a Black Widow action figure, Iron Man 3 director Shane Black may have your answer.

Black sat down with Uproxx for an interview about The New Guys, the buddy cop-comedy starring Russell Crowe and Ryan Gosling, where he discussed changes the superhero brand made to the original script. According to Black, the second sequel to Iron Man (which was co-written with Drew Pearce) was conceived with a female antagonist, but Marvel nixed it. Their reasoning? Black said he was told “that toys won’t sell as well if it’s a female.”

“So we had to change the entire script because of toy making,” Black said. In addition to rewriting the villain as male, Black and Pearce also reduced the screentime of Maya Hansen (Rebecca Hall) and Brandt (Stephanie Szostak) at Marvel’s behest.

While that directive will likely provoke outrage on the Internet, it’s worth asking: Is it true? Do toys aimed at males sell better than those for females? The answer is yes, but not for the reason you might think. The problem isn’t young women’s purchasing power, it’s “toxic masculinity.”

Do toys aimed at males sell better than those for females? The answer is yes, but not for the reason you might think.

Toys marketed to a young, female demographic having been declining in recent years after a notable surge in 2013. That year, the Wall Street Journal reported that sales of girls’ toys were up—buoyed by the success of My Little Pony and the Furby brand—while profits for games, action figures, and other products aimed at young men had plummeted. But what was most interesting about their sales report would become a harbinger of doom for the gendered, aggressively pinkified products long associated with young women’s brands: The biggest gains were in games, where sales skyrocketed by 29 percent. They earned $388.7 million.

Since then, the sales of Mattel’s classic Barbies have hit the skids, struggling to appeal to a new generation of young women. Despite notable gains in the fourth-quarter, due to holiday sales, Fortune reported in 2015 that Barbie was in major trouble. The once-iconic girls’ products posted yet another year of declining profits. In response to flagging interest in the brand, Mattel announced in January that the doll was getting a 21st-century makeover. Rather than its tradition pencil-thin silhouette, Barbie will now come in a range of shapes and sizes—including curvy, petite, and tall.

“In addition to Barbie’s physical transformation, buyers will also be able to totally customize the rest of the doll’s look from her skin tone, to her hair color, to her on-trend outfits,” People magazine reported earlier this year. “The hope is that this shift towards a wider array of doll options will help all women to feel represented, beautiful, and perhaps also begin to subtly shift the conversations we have surrounding beauty and body standards.”

But Barbie’s identity crisis reflects a larger truth: Girls are increasingly opting for more gender-neutral products, in addition to buying toys that might be traditionally thought of as for boys’ only.

The conventional wisdom is that the success of Frozen has hammered the final nail in Barbie’s dream coffin. In 2014, Disney’s unstoppable princess phenomenon single-handedly saved the toy industry, amassing $531 million in sales—and that’s just in the United States. Elsa and Anna dolls have continued to fly off the shelves ever since. But that doesn’t change the fact that, as Business Insider notes, girls are increasingly opting for handheld devices, including iPads and other gadgets, over physical toys.

It’s also likely that young women, lacking a broader range of options, have started shopping in the boys’ aisle.

It’s also likely that young women, lacking a broader range of options, have started shopping in the boys’ aisle. Last year, the most successful non-Frozen toys were those tied to popular action franchises: Jurassic World and Star Wars: The Force Awakens. Those movies were massive hits that generated huge amounts of excitement among all demographics, and that fandom boosted Hasbro’s sales by a huge 24 percent. In the case of Jurassic World, there’s nothing all that gender-specific about its merchandising: The film’s toys might get lumped in with products for boys, but they’re dinosaurs, which aren’t explicitly male or female. (If you want to get really technical about it, the dinosaurs in Jurassic World are women.)

The frustration over the lack of Star Wars toys specific to young women further indicate how much demand there is for this population to be formally included in a market they’re likely already buying into. After Rey—the film’s female protagonist—was conspicuously missing from the action figure sets for The Force Awakens, the Internet quickly took notice. (She wasn’t even included in the Monopoly board game!) Female fans, however, were used to it by now: The exact same thing happened to Gamora when the merchandise for Guardians of the Galaxy hit stores in 2015.

In a January essay, Flavorwire’s Sarah Seltzer blamed this unpenetrated market on “toxic masculinity.” “Little boys, you see, are assumed to be disdainful of dolls because it makes them appear sissy, or gay, or you know, caring, compassionate, tender, and other terrifying qualities,” Seltzer wrote. “And that dated, foolish, and problematic taboo around boys and dolls, conscious or not, might well be deemed by the toy makers more important than the yearning that little girls might feel to play with a toy that looks like them.”

It’s true that girls are already buying Star Wars products anyway, but toy companies are likely leaving a huge amount of money on the table when they don’t go to further lengths to attract female customers. In 2015, Forbes estimated that The Force Awakens would generate $8 billion in revenue in the next two years, meaning that Disney would make more money in stores than movie theaters. The same was true for Cars, which amassed an amazing $10 billion in toy sales. Even that’s chump change compared to how much money the Star Wars franchise has raked in historically: It’s estimated to have brought in $30 billion dollars in merchandise since A New Hope was first released in 1977.

That’s an absurd amount of money, and it’s simply bad business for companies like Hasbro and Mattel not to cash in by making those profits equal opportunity. (Think of how much bigger those numbers could have been if Star Wars marketed to girls.) But if toy companies are still catching up to what young women want, there’s signs that they’re finally listening: In February, DC Comics announced that it would be teaming with Target for “DC Super Hero Girls,” its first line of action figures exclusively aimed at young women. Options include Supergirl, Wonder Woman, and Batgirl.

Marvel may be stuck in the dated mindset that young women don’t buy toys, but those sexist notions aren’t just hurting the girls who are desperate for greater visibility, as well as to be treated equally by their favorite franchises. It’s also hurting their bottom line.