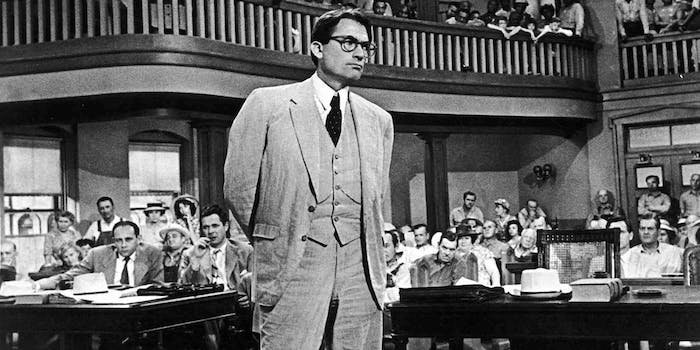 The painful reality of 'Go Set a Watchman' speaks to harsh truths in a post-Ferguson America.

Before Harper Lee‘s new novel even hit stores, Twitter was already having a meltdown over it.

Go Set a Watchman, which is both the sequel to and the original draft of To Kill a Mockingbird, hit stores on Tuesday. The novel has already stirred up controversy with regards to the origins of the manuscript, as well as questions about whether Lee is mentally competent enough to make the decision publish the book. But the most heated online discussions about Watchman have centered around a fact first revealed in advance reviews of the text: Atticus Finch is racist.

Now Mockingbird fans are struggling to come to terms with the fact that, to borrow a phrase from common internet parlance, their fave is problematic—very, very problematic. And people are very, very upset. Fox News pundits claiming that the book ruins the character of Atticus Finch, and reactions on Twitter have ranged from outrage and shock to theorizing that Watchman must be set in some kind of alternate universe. Some people are even going so far as to refuse to read Watchman, preferring to keep their idealistic view of Atticus intact.

For those taking issue with Atticus Finch in Go Tell A Watchman – think of it as him in an alternate universe – like Walternate in Fringe.

I was so looking forward to #GoSetAWatchman now….i refuse #AtticusFinch racist? Nope sorry not buying it. #TKAM #GSAW

Do I risk it all and read #Watchman??? Or remain blissfully ignorant, keeping Atticus on his pedestal? #HALP

The fact that so many disappointed fans would prefer not to acknowledge unpleasant truths about a favorite fictional character speaks volumes about how racism is viewed in America. It shows that many people choose to prioritize their own worldview over racial realities—a pattern that emerges whenever events like Ferguson demonstrate the vast gulf of racial inequality in this country. It’s simply easier to ignore harsh truths about the ways in which we are all implicated in a society mired by structural racism. There seems to be a persistent belief that by avoiding or even purposely ignoring a problem, it somehow becomes less real—which, in turn, creates an environment where bigotry flourishes.

Go Set a Watchman takes place 20 years after To Kill a Mockingbird and finds 26-year-old Jean Louise “Scout” Finch returning to visit her father in Maycomb, Alabama after years of living in New York City. According to Michiko Kakutani’s review in the New York Times, Jean Louise is dismayed to discover that her father is not the man she remembers. Instead of being the staunch egalitarian of her childhood, he’s now pro-segregation, anti-NAACP, and prone to making bigoted remarks about black people.

The fact that people would prefer not to acknowledge unpleasant truths about a favorite fictional character speaks volumes about how racism is viewed in America.

Kakutani writes, “Scout is shocked to find, during her trip home, that her beloved father, who taught her everything she knows about fairness and compassion, has been affiliating with raving anti-integration, anti-black crazies, and the reader shares her horror and confusion.”

It’s not hard to understand why Mockingbird fans are upset. Atticus forms the moral compass of that book—he’s a gentle, compassionate lawyer who takes on the impossible task of defending a black man accused of raping a white woman. He is firm in his belief in fairness and teaches young Scout that courts of law are meant to be “the great levelers.” When he’s trying to explain to Scout why he lives the way he does, he explains that, “I do my best to love everybody.”

So how could a man like that be a racist? Pretty easily, it turns out.

The truth is that Atticus does not need to view black people as equal in order to want to help them. In fact, there’s very little in Mockingbird to prove that Atticus would support the coming Civil Rights movement. He certainly feels sorry for black people, but he does not treat them as his peers. He does not invite Tom Robinson’s widow and children into his house. He does not encourage his children to play with children who aren’t white. He does not complain about the segregation of Maycomb’s courthouse or restaurants or city parks.

Atticus is certainly brave in the sense that he risks his personal safety and the safety of his family in order to act as Tom Robinson’s defense (aka to do his job), but that bravery does not take away from the many, many ways in which he is complicit in racism. After all, one’s belief in the moral equity of the law doesn’t preclude their own moral failings.

Mockingbird-era Atticus might believe that he loves black people, but the problem is that there’s a difference between loving a marginalized group in the abstract and actually doing the everyday work of allyship. Being an ally to people of color means confronting the reality of your own white privilege, and there is not one moment in Mockingbird when Atticus is forced to do that. Throughout the book, he remains secure in his role as a white savior.

The dawning of the Civil Rights era would have changed all of that—especially for a white man living in the south. Atticus would have had to take a long, hard look at how he was engaged in a system that elevated white people at the expense of people of color. He would have had to examine the ways in which the power structure he’d spent years claiming to hate was, in fact, the very thing that had allowed him to live such a comfortable life.

He would also have had to come to terms with the fact that his family had owned black people just two or three decades before he was born. He might have even had to face black folks who weren’t unquestioningly grateful for everything he’d done. Certainly none of that would have been easy for a man nearing the end of his life, especially not a man who feels that he deserves accolades instead of shame.

So how could a man like that be a racist? Pretty easily, it turns out.

Thus, it’s possible that the person who led a spirited defense at the trial of a black man falsely accused of rape could also be racist. As safe and comfortable as it is to believe otherwise, the two are not mutually exclusive.

Looking at the juxtaposition of the two different versions of Atticus—not to mention the fervent love for him that’s only grown stronger in the intervening years—Lee’s reluctance to to publish Go Set a Watchman is understandable. The new book spoils the fairy tale that white people have been telling themselves for the past half century: that our model for racial justice is a well-to-do white man in a three-piece suit; that each of us can earn our allyship card through a one-time public act; and that heartfelt platitudes are worth more than challenging ourselves through long-term introspection.

While Lee likely knew that publishing Watchman would have raised an outcry, its release also shows just how necessary it was. As much as America in 1960 needed Mockingbird’s Atticus, America in 2015 needs a racist Atticus.

At a press conference in 1963, Harper Lee was asked whether her book was an indictment of a certain group of people. She replied, “The book is not so much an indictment as a plea for something, a reminder to people at home.”

Go Set a Watchman serves the same purpose: as a plea for white people to recognize that events like those in Charleston, South Carolina and Ferguson, Missouri do not happen in a vacuum. Her novel is a reminder that in a world where unarmed black people are routinely murdered by police, we still have so far to in terms of racial equality.

And, finally, it’s a long overdue lesson that even our greatest heroes are flawed. We need to see that the people—fictional or otherwise—that we hold up as being the best among us are not always what we want them to be. Watchman’s Atticus should act as a mirror for white people who consider themselves to be progressive and anti-racist. Rather than ignoring him or writing him off, we need to look him square in the face and ask ourselves in what ways we might be like him.

Because while we all wish we could be the Atticus we knew when we were growing up, in many senses we are also the man he became.