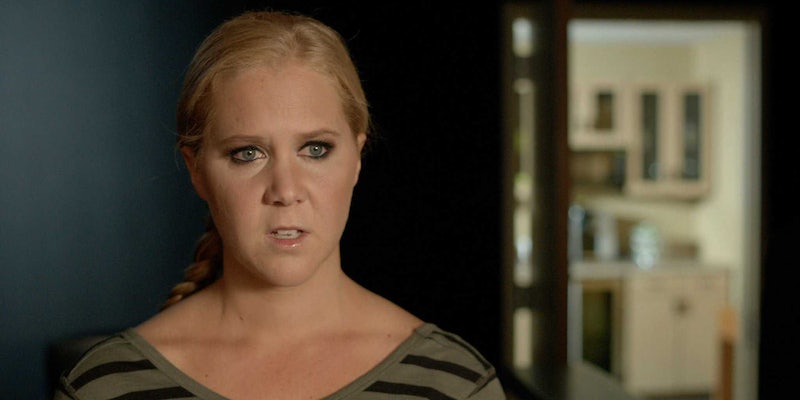 Amy Schumer isn’t as feminist as the Internet thinks

Women deserve better than old stereotypes in a new package.

Midway through its third season, Inside Amy Schumer is riding high on a wave of success. Grantland’s Molly Lambert called it “another jewel in the Comedy Central crown,” and David Sims praised it as “a gem” in his review for the Atlantic. Schumer herself seems to be ubiquitous on the Web, from photobombing a couple’s engagement photos and hosting the MTV Movie Awards to writing Judd Apatow’s upcoming film Trainwreck. This summer seems to be the Season of Schumer.

On the surface, it’s not hard to see Schumer’s appeal. In spite of the constant negative comments she makes about her appearance and weight, she’s pretty and blond and can be incisive and funny. Her comedy often centers around her self-professed slutty dirtbag identity, and it’s certainly great to see a woman talking frankly and hilariously about her sexuality. She also uses her platform to skewer social issues like beauty standards, fatphobia, and even rape culture. But while her work is being called subversive and transgressive, the truth is that many of her jokes aren’t as enlightened as they might seem.

Take, for example, a bit where she says, “I used to date Hispanic guys, but now I prefer consensual!” No matter how you parse this joke, it’s racist and awful. It’s not a smart critique of rape culture. It’s a white woman blithely saying that all Latino men are rapists.

And this is not the only racially charged remark Schumer has made. While hosting the MTV Movie Awards in April, she said, “Gone Girl, how good was Gone Girl? Such a good movie. If you didn’t see it, it’s the story of what one crazed white woman, or all Latinas do, if you cheat on them. That’s a fact.” Yes, that’s right—a woman being hailed as a feminist icon made a joke about how Latinas are crazy. Clearly Jennifer Lopez was not impressed.

What’s even more baffling is how quickly her fans are able to write off such jokes as “a sour note,” or “not representative of her work.”

In fact, these jokes are very representative of her work. As Mikki Kendall said in the Hairpin, “solidarity is for white women.” It’s clear that Amy Schumer’s brand of comedy very much embodies that sentiment: Her jokes target a primarily white audience, often at the expense of people of color.

Schumer has made a name for herself by deconstructing rape culture in skits like “Football Town Nights,” in which she parodies the popular television show Friday Night Lights in order to make a point about male athletes and sexual assault.

But she’s also made jokes in which sexual assault is the punchline itself. For example, she once joked: “I finally just slept with my high school crush. But I swear; now he expects me to go to his graduation—like I know where I’m going to be in three years.” There’s nothing funny about a 30-something woman preying on 15-year-old boys, especially in a culture that ignores and marginalizes male survivors. A rape joke is a rape joke, even if it’s a cute blond girl making it.

Amy Schumer also frequently makes jokes that perpetuate stereotypes rather than dismantle them. In a recent skit from her show, Schumer plays the character of a “sensei” teaching the art of “Female Emotional Combat” to a group of men. She does this by pitting them individually in a series of arguments with a woman pretending to be their girlfriend. “Female Emotional Combat,” as it turns out, involves women manipulating, shifting goal posts, gaslighting, and invading the privacy of men. “Change your email password every two hours,” Schumer advises the men, later adding, “Women can’t deny the authority of therapy and/or Oprah.”

We all know the joke she’s making: It’s one we’ve heard our whole lives, and not only is it gross, it’s also boring and hacky. Amy Schumer isn’t making any clever or subversive statements here; she’s just toeing the same old Women Are Crazy line. And while we’re used to hearing this type of material from run-of-the-mill bro comedians, it feels like a slap in the face when it comes from a woman whose work is being touted as the Best New Feminist Thing.

It’s hard not to feel like Schumer is only here for women who look like her. Her recent complaints about Hollywood prioritizing beauty over talent are certainly valid, but she seems unwilling to acknowledge that her own appearance has almost certainly given her an advantage in her field. No matter how many self-deprecating remarks she makes about herself, she’s still thin, blond, and pretty, not to mention white and able-bodied.

And she doesn’t seem to be making noise about the lack of diversity in comedy in other aspects; she’s not, for example, challenging the dearth of women of color in shows like hers. Instead, she’s making jokes about them.

While Schumer is undoubtedly funny and talented, a lot of her work seems like the same old bullshit being sold to us in glossy feminist packaging. Of course, it’s wonderful to see a woman succeeding in mainstream comedy, but that shouldn’t put her beyond criticism.

It seems like people are quick to turn a blind eye to Schumer’s more troublesome work because she’s one of the “good” ones. But how good can a comedian be when they’re using their platform to punch down? Of course, everyone is flawed and no one is perfect, but not making racist jokes is pretty basic. And the same goes for perpetuating harmful stereotypes about women.

A good feminist icon is hard to find, but frankly, we can do better than Amy Schumer. Not only that, but we deserve better.

Correction 11:23am CT, June 11: An earlier version of this article misstated Schumer’s role in Trainwreck; she wrote that screenplay.