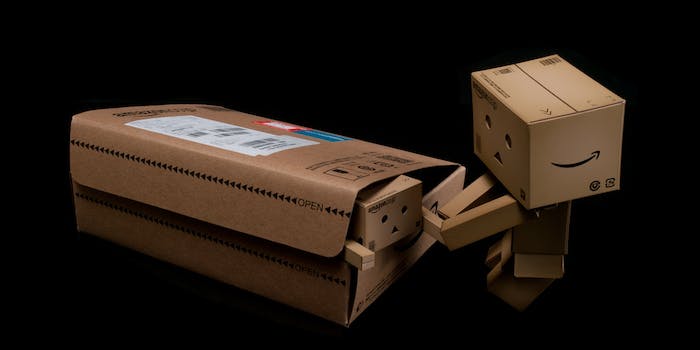 Amazon might destroy the economy by giving you what you want

Be careful what you wish for, because it might put millions of people out of jobs.

Robots are currently having their Hollywood moment. Films like Her, Avengers: Age of Ultron, Chappie, and Ex Machina have all brought the idea of artificial intelligence to the forefront of pop culture at the same moment the tech world seems ever close to making it a reality. In those movies, the machines judge us and ridicule us as often as they love us and cherish us. They actively replace humans through sheer force or indomitable love in ways both cruel and charming.

But when the true robot revolution comes, it won’t be the dastardly femme fatale of Ex Machina’s Ava or the brute tyranny of Ultron. The robots that will affect us most will be far more slick about their takeover.

Enter Amazon stage left. This week, the online retailer announced it would be providing free same-day delivery to members of its Prime subscription. If you are a subscriber and live in one of 14 metropolitan areas, any order you place before noon will arrive that same day. The service was previously only available for some of the site’s offerings and only possible in Manhattan.

This massive expansion is the result of Amazon spending untold heaps of money expanding its infrastructure and building more “fulfillment centers” (otherwise known as shipping warehouses) across the nation.

But when the true robot revolution comes, it won’t be the dastardly femme fatale of Ex Machina’s Ava or the brute tyranny of Ultron. The robots that will affect us most will be far more slick about their takeover.

Same-day delivery is the Holy Grail for online retailers. Google and eBay’s efforts have only produced middling results, while Walmart, Amazon’s largest competitor, is currently developing the capacity for same-day delivery as well. What Amazon’s success in same-day delivery means for the culture and the economy, however, is one less reason you’ll ever have to leave your house. It puts Amazon in a very powerful position, largely controlling two of the largest sectors of our economy: shipping and retail.

This, on its surface, isn’t so bad. Amazon’s same-day shipping utopia imagines a future of untold convenience and comfort available to all. On its own, same-day delivery should bring along the promise of more jobs and a more productive economy under Amazon’s tutelage: faster shipping means more warehouse workers and more drivers to deliver packages.

But Amazon’s focus, much like Google and Uber, is not to help the human economy evolve but instead to replace it with the robotic one.

Few companies have strived as hard to discharge the humans in their supply chain as Amazon. While Walmart currently employs over 2 million, Amazon employs a comparatively small 150,000 workers, but Amazon’s rate of growth far outstrips Walmart.

The way Amazon is able to retain such power with such a comparably limited staff is not just the website but brutal, unadulterated efficiency from its workforce. In a 2014 article for Salon, Simon Head called the working conditions in Amazon’s fulfillment centers “even worse than Walmart,” with ex-employees referring to the company’s warehouses as a “prison,” where you can be fired for eating lunch or using the bathroom.

Lucky for Amazon, robots don’t need to do either of those things. In 2012, it shelled out $775 million to robotics company Kiva Systems, which has produced rather impressive “picking” robots—machines that can locate and package any item in a warehouse. The robots got their first trial run last Cyber Monday, when Amazon deployed 15,000 of them to help them through the largest shipping day of the year.

But Amazon’s focus, much like Google and Uber, is not to help the human economy evolve but instead to replace it with the robotic one.

As the company found out, the compact size of the knee-high machines means warehouses can hold more stock, too—not to mention all the room saved once your remove most of those pesky humans.

Of the 150,000 people working for Amazon, over 40,000 were hired in the last year. But to pretend this is what Amazon wants is to ignore the obvious. Until Amazon can simply replace its entire workforce with robots, it’s going to continue to treat its human employees like robots (meaning they’re faulted for getting sick, tired, or pregnant). Soon enough, those mistreated workers will be out of a job entirely.

But that only pertains to half of the system that will make same-day delivery possible.

After your purchase leaves the warehouse, it has to get to you. Currently, Amazon relies on third party companies like UPS and FedEx, as well as a network of local shipping companies and couriers, to get its packages to your door.

While that provides business to an industry that employs millions of Americans, Amazon has made aggressive (and somewhat bizarre) moves to be rid of them, as well. Last year, Amazon turned heads by announcing plans to make its deliveries by drone, as futuristic and impractical an idea as there has ever been. In order to accomplish this goal, Amazon would have to push drone technology lightyears ahead of where it is now, in order to conquer such traps as bad weather, cityscapes, and interfering with local air traffic.

That said, the Federal Aviation Administration has granted Amazon allowance to research the program’s efficacy.

Soon enough, those mistreated workers will be out of a job entirely.

Less impractical, however, is the self-driving delivery system. The self-driving car has been one of the most exciting and important developments to come out of Silicon Valley in the past few years, but it also poses a huge threat to the American workforce—with some estimates predicting it will decimate around 10 million jobs in the U.S.

However, an automated future clearly remains a goal both of retailers and shipping companies alike. Google Express, which is also vying for same-day delivery, has made no secret of its intentions to turn its entire fleet of drivers into self-driving cars. The trucking industry has likewise taken an interest, with Daimler unveiling its first self-driving semi truck earlier this month.

Most of the jobs being threatened by these developments are largely hidden from consumers. Even when tracking a package through the system online, it’s likely you aren’t conscious of how many humans it takes to deliver your Amazon purchase to you. Amazon knows we are addicted to the convenience of online shopping.

Our growing dependency on an insta-marketplace was behind the company’s surprise introduction of Amazon Dash earlier this year, consisting of little buttons you install around your house and press when you’re out of some daily necessity, like coffee or detergent. The Dash, linked to your Amazon account through your WiFi, then orders you new razors or body wash or whatever you may need.

The self-driving car has been one of the most exciting and important developments to come out of Silicon Valley in the past few years, but it also poses a huge threat to the American workforce.

Combined with same-day delivery, Amazon will effectively become the Replicator from Star Trek: push a button and instantly get what you want.

Amazon’s push toward automation, thus, takes advantage of our very Western desire to get what we want exactly when we want it. By encouraging us to see ourselves purely as consumers, however, Amazon is threatening entire industries and the people they employ. By taking the human out of the equation, we aren’t faced with the negative consequences of our preferences—or the effects they will have on millions of American workers.

Unlike the machines in Samantha from Her, Amazon is not infatuated with us and eager to serve our every need. Nor, like Ultron, is it attempting to squash us through its sheer might. Amazon and its coming army of automation is attempting to destroy us by serving our every need.