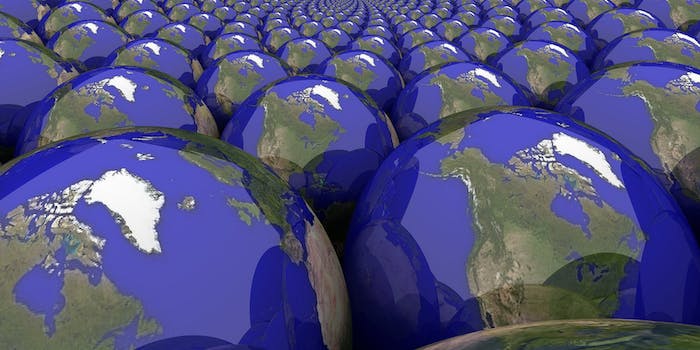 It's Google's world, we're just living in it.

Google has often looked like a company that’s bored with itself. The majority of the search giant’s web services—GMail, Maps, Android, and Chrome—are rather mundane compared to the side projects Google has referred to as its “moonshots”—self-driving cars, artificial intelligence, robotics, and immortality.

Managing all of the world’s information and making stellar consumer products from it is cool and all, but it’s hard for a new software update to really compete with something like Project Calico, an effort to literally find the cure for death. It’s Google’s ubiquity as a consumer brand combined with its expansive (and somewhat frightening) ambition that has made it a frequent target for accusations of attempting world domination.

If a complete takeover of the world is Google’s next big thing, the next step toward that goal is this week’s formation of Alphabet. As Google co-founder and new CEO of Alphabet Larry Page wrote in a blog post, Alphabet is a brand new company that will own several other companies, of which Google will be the largest.

The search giant is effectively spinning off its Web services divisions into one company called Google, while its other projects and acquired companies—Google X, Project Calico, Boston Dynamics, Fiber, and Nest—will all become their own companies with their own CEOs and investors. All of them will exist under the umbrella of Alphabet.

While the restructuring might seem a bit dense (here’s a handy graphic from Business Insider’s Henry Blodget if you’re still confused), the decision actually makes a ton of sense. Before Alphabet, the CEO of Google (formerly Page himself and now former product chief Sundar Pichai) managed a wide range of services and entities that were mostly tangentially related. If you were in charge of Google last week, you had to manage a Web advertising giant, an ISP, a venture capital firm, a robotics lab, and a smart thermostat company that shared the same executives, the same working space, and the same investors.

Under Alphabet, each entity formerly under Google will have its own executive team and staff, allowing each one to focus on its own goals without worrying about the goals of the others. “Fundamentally, we believe this allows us more management scale, as we can run things independently that aren’t very related,” writes Page. “Alphabet is about businesses prospering through strong leaders and independence.”

It’s Google’s ubiquity as a consumer brand combined with its expansive (and somewhat frightening) ambition that has made it a frequent target for accusations of attempting world domination.

Page has likened the new company to Berkshire Hathaway, Warren Buffett‘s conglomerate—which owns companies as disparate as Geico, Fruit of the Loom, and Helzberg Diamonds.

So what does all this corporate speak mean for Google’s supposed plan for world domination? Well, as it turns out, moonshot projects like autonomous cars and Internet-by-balloon are not fantastic money-making ventures, which worries some of its investors. Page has cited before the impatience of investors who would prefer Google focus on its more profitable Web services instead of chasing sci-fi fanboy dreams.

As recently as June, Google Chairman Eric Schmidt felt it necessary to defend Google’s experimental wing to shareholders. “Most companies ultimately fail because they do one thing very well, but they don’t think of the next thing,” Schmidt explained, “and Google is very committed to not doing that.”

The company is committed not just in its ideology but in cash flow—funding their pet projects with dollar signs big enough that investors would have reason to worry. Project Calico, which—I’ll repeat—is a project by real, respected scientists looking to locate the cause of aging and finally put a stop to it, is perhaps the best example. While any private company that cures aging will make oodles and oodles of money, Calico is currently just an expensive ambition that has absolutely nothing to do with search engines, email, and apps on the Play Store. Google has kept Calico’s expenses a secret, but the company announced plans last year to build a $1.5 billion research center.

By separating Calico and its other ambitions from Google’s main services, Alphabet can effectively research whatever technology or scientific endeavor it wants, while still preserving the integrity (and profitability) of its most popular products. According to the SEC paperwork filed to form Alphabet, Page anticipates the ability to retain “two reportable segments for financial reporting purposes, with the Google business presented separately from other Alphabet businesses taken as a whole.”

So however absurdly imaginative you thought Google was, Alphabet stands to be even absurd. Free from worrying about the finicky needs of investors, the adventurous minds at Google X, Alphabet’s experimental wing (in charge of such projects as autonomous cars and Google Glass), can explore even more options than they had ever imagined. As much as anyone could put Google on a leash, Alphabet is free to flood its subsidiaries with revenue from Google into any project it sees fit.

The company is committed not just in its ideology but in cash flow—funding their pet projects with dollar signs big enough that investors would have reason to worry.

To get an idea of what that might look like, it’s best to look at projects Google X has abandoned. Head of Google X and its likely CEO Astro Teller has said before the lab leaves behind “100 things a year, easily”—such as a jetpack—but retains a petri dish large enough to experiment with ideas like a space elevator or teleportation. While these projects weren’t shut down by investors as much as they were by the laws of physics, they highlight the endless aspiration of the company now untethered to a boring old search company.

Whether this means world domination is imminent is best left to the conspiracy theorists. What the formation of Alphabet does mean is Larry Page and co-founder Sergey Brin just took a major step to becoming even more powerful than they’ve already are. Far from its humble beginnings as a search algorithm, Google often seems like its own nation-state, warring with Europe and fostering its own homeland.

By streamlining itself, stripping off its imaginative coil and focusing on the real business of devouring the world’s data, Google might secure itself as the second most powerful technology company in the world. First place would go to Alphabet.