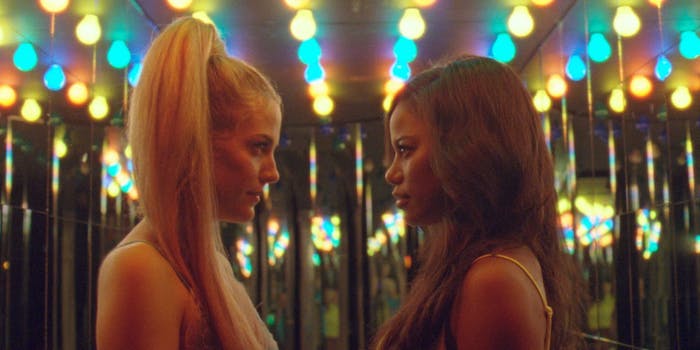 In October 2015, A’Ziah King posted the mother of all Twitter threads, a 144-tweet saga that recounted how—as she put it—”me & this bitch here fell out” that included a road trip to Florida to make some extra money pole dancing, sex trafficking, and murder. It gripped the internet, capturing the attention of journalists and filmmakers alike, and soon enough, Hollywood came knocking with a film that’s based on King’s thread and an article from Rolling Stone that fact-checks her story. It left us with the question of whether it’s even possible to make a film out of a Twitter thread.

A’Ziah King’s epic (and mostly true) 144-tweet tale of a trip to Florida with a new friend that went completely off-the-rails is brought to life in a surreal and stress-fueled fantasy-turned-nightmare that fully embraces its internet roots.

In short, you absolutely can. Zola is compelling and chaotic, perfectly capturing the energy that the original thread put out there as well as the intricate nature of a story told by the internet. It feels fresh no matter how long it’s been since you read the original thread—a surreal and stylized fantasy that has the capacity to hook you from its very first moment, helped largely by mesmerizing performances from Taylour Paige and Riley Keough. But as much as a ride that Zola is, it loses steam in its second half even as the stakes get even higher.

According to text that appears before the start of the film, “Most of what follows is true.” It’s framed as a story that Zola (Paige) relays to another dancer as they get ready for the night. Paige is mesmerizing on the screen and in Zola’s voiceovers, perfectly capturing the initial moments of becoming enchanted by Stefani (Keough) when she visits the restaurant where Zola works. Their connection is instantaneous, and they immediately swap numbers and social media handles; it’s easy to see how Zola became enraptured by Stefani to the point where she’s barely able to put her phone down during dinner with her boyfriend Sean. When Stefani invites Zola on a road trip with her hapless boyfriend Derek (Nicholas Braun) and roommate X (Colman Domingo) to Tampa to dance, Zola immediately says yes.

Even before they arrive in Tampa, Zola starts to become weary of Stefani, and soon enough, the red flags start to appear. A seedy motel room where Derek has to stay while Zola and Stefani are dancing. Selfies used for more nefarious purposes. A push to lie about the money made from dancing. Non-idle threats, sex trafficking, and a conversation about making sure you’re being paid what you’re worth (especially when sex is the product). And that’s just the tip of the iceberg.

Zola is a colorful and high-energy fantasy, and it’s often a visual treat. It fully embraces the mobile and internet roots of its story, using the iPhone home screen font to indicate the passage of time. When Zola tunes out a conversation, the MacBook volume sign mutes it; she later fades to a psychedelic screensaver. Throughout the film, you hear a ping to note another tweet, something that instantly stands out but blends into the background. And the cinematography emits a surreal vibe, almost like the story itself), that includes a kaleidoscope of outfits that Zola contemplates wearing and a montage of penises from the men that Stefani sleeps with after Zola makes her a new Backdoor page.

Although the film stays firmly in Zola’s corner, it doesn’t make Stefani a one-note villain. She’s both complicit and a victim, someone who’s given notes of nuance even as she drags Zola further down a nightmarish weekend; at one point, we’re given a much different version of events, which were posted to Reddit by the real-life Stefani.

Amid the life-and-death stakes that follow and jaw-dropping sequences, pacing issues plague the latter half of the film before an abrupt ending that falls flat. But then again, maybe its ending is a fitting one, even if it feels anticlimactic on the screen. Sometimes, a Twitter thread just ends without fanfare, making you wonder what you just read. And to its credit, Zola gives you a lot to think about.

Zola is now out in theaters.