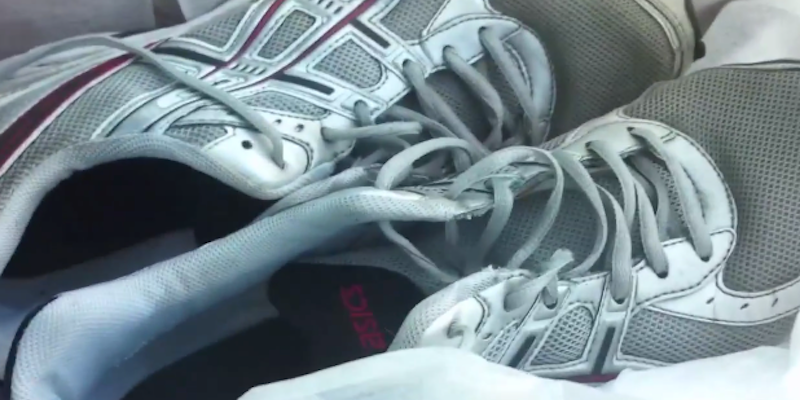 A tongue-in-cheek backing option on Ze Frank's Kickstarter turned out to be anything but.

When Ze Frank launched a Kickstarter campaign to revive his webseries The Show, many of his backing options sounded more like jokes than reality.

Seventy dollar donations earned backers a lenticular How To Dance Properly Birthday card. One hundred dollars bought a black-out poem made from a page of Herman Melville’s Moby Dick. The list of options went on and on, with rewards set for pledges all the way up $10,000.

Frank set up one of those incentives to be especially surreal, however, and only offered it as an option to one backer. For $999, he would send that individual one signed rubber duck, a black-on-black fuzzy duck t-shirt, and he’d let the backer catch a sneak preview of the first episode.

Frank also made it such that if that $999 backer sent him a pair of shoes, he would walk a full mile in them and record the experience for the backer to see.

He wrote the reward as a joke, having no idea would it would bring in return.

Frank documented his mile-long walk in a YouTube video titled “Shoes.” Posted onto YouTube yesterday, the 4:46 video starts bright and early in the morning as Frank drives from his house in Los Angeles out to his walking destination: a sun soaked hill in the California countryside.

As the video progresses, we learn that the person who made the $999 pledge is a man named Matt, and that Matt wore Asics shoes, size 10.5.

Frank begins his walk. We learn that Matt started to experience tingling in his legs in 2006. We learn that doctors found a tumor on his spine in 2010. We learn that he couldn’t feel his legs when he woke up from surgery and that he had to go through more than 20 months of physical therapy to get to a point where he could walk again.

And then we learned that he wore that pair of Asics to every physical therapy session he had to endure, all 20 months of it.

Asics discontinued making that shoe shortly after Matt finished physical therapy. He told Frank that he wanted the last mile the shoes traveled to appear on an episode of The Show when Frank revived it on the Web.

“I created that reward as a joke, a conceptual joke,” Frank said at the end of the video. “But maybe if you joke about empathy, it has a way of smacking you in the head.”

The old adage goes: You can never pass judgement on a man until you’ve walked a mile in his shoes. Ze Frank probably never expected to experience it literally.