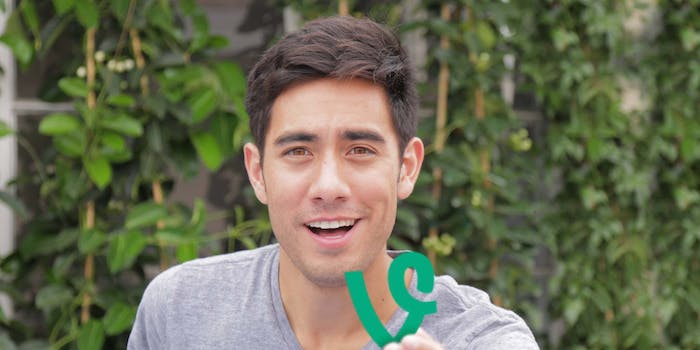 The stereotype of a Vine star is a young guy being idolized by equally young teen girls who dutifully watch their raunchy six-second comedy bits. Zach King breaks that mold.

The 25-year-old filmmaker still trades in the six-second payoff, but his vines are elaborate tricks, with King flying out of a laptop screen and directly onto a Slip ’N Slide or morphing a piggy bank into an actual pig in front of your viewing eyes. They’re true movie magic, encapsulated in loops and viewed over 1 billion times and counting; indeed, their video trickery earned him his chosen moniker, Final Cut King. While other vines might need a few props or some clever camera cuts, King’s productions can take weeks of planning.

“We like to come up with an idea … that we think is relatable to a lot of people,” he said. “Once we hone in on the ideas—and sometimes the ideas can take a minute, or it could take weeks to flesh out what it is—it takes from a day or two to film, and a couple days for post-production. Lately they’ve been ranging on the really long side.”

With 3.5 million followers on the platform, not to mention his 289,000 on Instagram and 879,180 on YouTube, it’s safe to say King’s particular strategy has paid off. Unlike other Vine stars, King said he’s focused on building his following organically, instead of through the tried-and-true method of collaboration with popular channels.

“I’ve noticed in the past when you collab a lot, it’s good for instant growth, but in the long term it doesn’t really stick,” said King, adding that despite the fact that his home of Anaheim, California, is only an hour away from Los Angeles, it still keeps him apart from the other big-name viners. Another divide between King and the rest of the Vine set? Content.

“The viners I’ve worked with in the past are so creative, and I admire what they do, but their jokes are somewhat on the dirtier side,” explained King. “My content is clean, and ultimately I want my kids—someday, when I have kids—to watch what I do.”

While many of those other Viners are the type that attract hoards of screaming fans when they appear in public, King said his crowd is more of the aspiring-filmmaker type, although he admits there are a few screamers in the mix.

“I think there’s a few screaming teens… I’m not sure why they’re screaming,” he laughed. “The ones that are our main fanbase are the filmmakers or the editors; a lot of them have watched our tutorials in the past. I was attending a wedding last weekend, and the videographer came up to me, he was a 20-year-old I think, and he said, ‘dude, I wouldn’t be here if I hadn’t watched your tutorials five years ago.’ That’s really cool, to meet those people and hear those stories. That’s what keeps me going, to know that people are learning from our stuff and being inspired by it.”

King started off in the pre-Vine era as a YouTuber, making short films during college. He credits his YouTube channel as the way he paid for college, both from Google AdSense money for viral videos like Jedi Kittens series, and from simply teaching people how to do Final Cut and filmmaking in general with tutorials and selling educational programs. When he made the transition to Vine after graduation, he was shocked to see how quickly brands came on board with him.

“I noticed all my roommates had stopped watching YouTube, or even Modern Family, and were scrolling these clips,” explained King, who said he thought mistakenly that they were just audio clips at first. “I fell in love with it as a new creative spark for me. Brands started coming within three or four months. On YouTube it had taken me years to get to that point, so it was interesting to see how quickly brands were wanting to try it out and adopt it.”

“I fell in love with [Vine] as a new creative spark for me.”

Now King is working with Best Buy to help launch the #BESTCOLLEGE challenge, where fans can submit videos with college tips and advice for a chance to win $2,500 in tech supplies for their dorm room.

“When I was a film student, I would enter these film contents,” said King. “That’s how I got my initial camera in college. I paid for school with some of those scholarships and grants I won through those contests. Now I can help host that content and know that the filmmaker geeks out there [are] entering to win some awesome tech.”

While King is a star in his own right because he’s been in front of the camera—mostly an accident, he said, because there were no actors around—his ultimate fantasy is to film a feature-length production, keeping himself in the background.

“The dream would be to do it as a blockbuster movie and blow stuff up and have a cool story,” he explained. “I think it’s going to be a journey. I don’t want to abandon the audience; you’re going to want to bring them along with you. That’s a tricky balance: how you get your audience to follow you while you’re not spending a lot of time making as much personal content.”

In the meantime, he’s continuing to produce short form projects across several mediums, trying out new platforms like Snapchat and techniques like 360-degree video. His biggest change has been trying to be more professional, which includes using stunt people.

“Vine loves physical impact, so if we have to jump through a wall, we’re able to use really talented stunt people for that,” he said. “We’ve been trying to be professional and safe about what we’re doing.”

The one exception: King. He still does his own stunts.

“I love it,” he exclaimed. “You watch the behind-the-scenes in movies and go, ‘I want to be the stunt man.’ That’s me living out a second fantasy at the same time.”