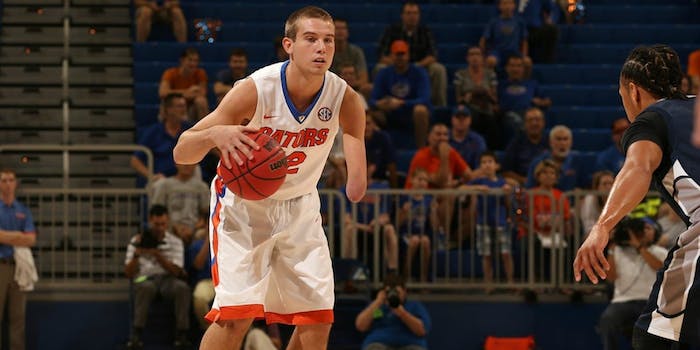 Zach Hodskins was born without his left hand and forearm. But that never stopped him from playing basketball and starring in high school in suburban Atlanta. Not only does Hodskins continue to play, he earned a preferred walk-on spot at Florida, meaning a ballplayer who was born with only one hand is on the roster of a high-level Division I basketball school.

And now he’s also on the school’s career scoring list, because on Tuesday, Hodskins entered the Gators’ game vs. Jacksonville and recorded the first points of his college life. It was an awesome occurrence and, simply put, one hell of a move to the basket for the sophomore guard.

The crowd might not have sounded loud in that clip, but based on the video below, the fans in attendance were awfully excited.

“Really happy for Zach,” Florida coach Mike White said, via the Gainesville Sun. “Great young man. Obviously overcoming a great deal of adversity. He’s a very, very likable young man, you can tell by the decibel level in the O’Dome when he scored. It was a fun moment for our team and for Zach.”

Lest you think all of this was a fluke or that Hodskins doesn’t have true skills, the video below should release you from that idea.

Photo via University of Florida