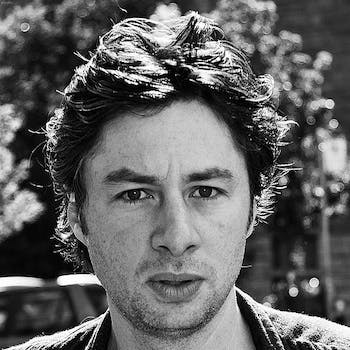 Actor Zach Braff took to Reddit to announce that both he and Mitt Romney are descendants of a woman falsely accused of witchcraft. Hilarity ensued.

If you’re a well-known actor who’s just discovered a presidential candidate and an alleged witch are distant relatives, there’s only one way to inform everyone: by taking to Reddit.

Scrubs and Garden State star Zach Braff recently discovered he’s not only the only eighth-generation descendant of a woman falsely accused of witchcraft—and so too is Mitt Romney, the leading Republican presidential candidate.

Braff shared the news on Reddit, aptly enough in r/WTF, where he linked to a scanned image of a newspaper story revealing the link between himself and Romney.

The story, which appears to have been published in the New Jersey Jewish Standard, claims Braff and Romney are both the descendants of Rebecca Nurse, who was accused of being a witch at the Salem, Mass., witchcraft trials in the 17th century. Nurse, who was hanged, is one of the main characters in Arthur Miller’s famous play, The Crucible.

As you might expect, redditors are not holding back when it comes to making a little fun of Braff, who’s a reasonably active redditor himself. (He carried out an AMA in September.)

“TIL Zach Braff is a government spy trying to get us to vote for Mitt Romney,” wrote usarmy74d.

“As crazy as that is, I’m holding out for the Donald Faison/Herman Cain surprise relation,” quipped Dr_Kerporkian.

Placing things in a little perspective for Braff, robbydb wrote, “It could be worse. You could be related to Rick Santorum.”

Meanwhile, bumpfire opted to tease Braff for his relation to an alleged witch: “It’s okay man, I’m sure they just misplaced your Hogwarts letter. Stay strong.”

Though Braff makes it very clear that he has “nothing in common” with Romney, he’s ready to test out the other interesting family link that’s just been unearthed: “Incidentally… buying a broom later today. You know… just to see…”

If Braff does achieve flight on a broom, I can only hope that he does so while shouting “Eaaaaagle!”