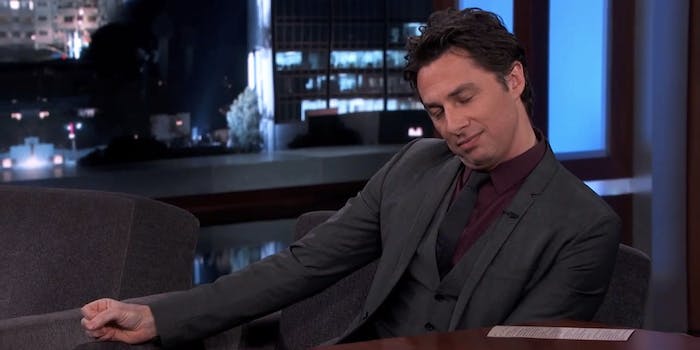 Not even Red Bull could save Zack Braff's Bullets Over Broadway performance for the woman whose family turned her naptime into a joke.

If you’re a live theater performer, you might think you’ve seen it all. But as Zach Braff proved on Jimmy Kimmel‘s show last night, there’s always something new on Broadway.

In the case of a recent performance of the new Braff-headlined musical Bullets Over Broadway, one woman was not ready for her closeup, and the result was a combo of every actor’s worst nightmare and a family’s hilarious Weekend at Bernie’s prank on their own relative.

On Jimmy Kimmel Live last night, Braff shared his experience of spending the whole first act of a recent performance watching a woman on the front row slumbering peacefully away, much to his chagrin.

At intermission, Braff sent her a Red Bull and a note begging her to try to wake up. From there, it’s sunglasses all the way down.

Yikes! If the new Susan Stroman musical is that hard to slog through, the audience at the St. James might want to brush up on their theater etiquette, courtesy of Broadway reviewer Chris Caggiano:

@ajaromano I dunno. I had the same reaction to BULLETS

HT The Wrap | Photo via NYWaterway